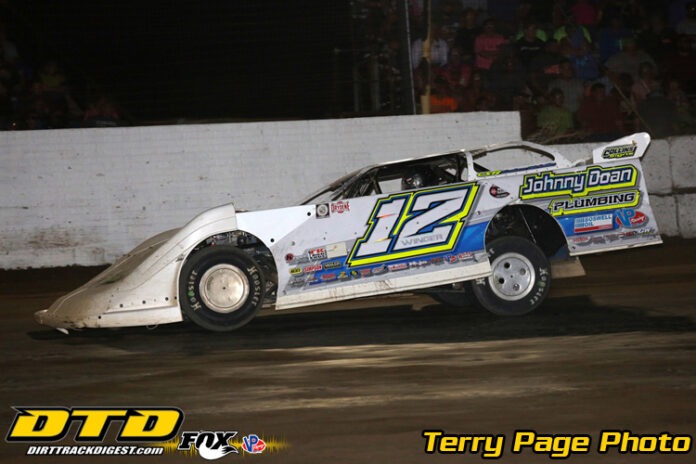 WAUSEON, OH – It’s been hot out on the Hell Tour this season. Nobody has been feeling the heat more lately than Ashton Winger, who bagged his second DIRTcar Summer Nationals win in three days Saturday night at Oakshade Raceway.

Once again faced with the task of holding off points leader Bobby Pierce, Winger held strong with the three-time champion behind him for the entire second half of the race. Leading the final 29 circuits of the 50-lap contest, Winger not only kept the field behind him, but pulled away from them, finishing with a 2.8-second gap over Pierce at the line to win his first career Birthday Race.

Both of his previous Summer Nationals wins came from the front row after some good fortune in the redraw. This time, each Heat Race winner redrew against five other drivers, as the season-high 53-car field called for six Heats. Winger pulled third best, but didn’t exactly have the greatest boost of confidence going in.

“I wasn’t sure with redrawing [third] – I knew Tanner [English] would be tough and Dona [Marcoullier] would be tough,” Winger, of Hampton, GA, said in Victory Lane. “I’m glad everything worked out the way it did.”

Like his win on Thursday at Thunderbird, Winger was forced to work for the lead in the early going, getting around Tanner English for second after a restart on Lap 2. But after another caution just seven laps later, Winger’s straight shot at the lead went on pause for a moment.

Multi-time Summer Nationals Feature winner Jeep VanWormer, of Pinconning, MI, uncorked some rocket-like speed on the ensuing restart and went from third to first in one corner after leader Dona Marcoullier slipped up in Turn 1. Winger also slipped up the banking and gave room for VanWormer down low as he zoomed on by with the top spot.

His lead wouldn’t last, though. Upon reaching slower traffic on Lap 22, VanWormer slipped over the cushion in Turn 4 and gave way to Winger on his inside. Pierce eventually got by five laps later and set his sights directly on Winger.

Three more caution flags reared their heads before the checkered, meaning Winger had to play grade-A defense on the restarts with Pierce right on his tail.

“When Bobby was showing me a nose on those restarts, I didn’t really know 100 percent where to be, but I figured what I was doing was working so I just kept doing it,” Winger said.

His good defense ended up making a great offense, as he marched away from Pierce and the rest of the field in the closing laps to collect his first $10,000 check of the season for his third career Summer Nationals victory.

Pierce hung on for second, again over next-closest in points – Tanner English. He now extends his points lead to 115 over the Kentuckian with 11 races remaining. Six-time Oakshade track champion Rusty Schlenk came home fourth after a stellar climb through the field from 13th, while VanWormer settled for fifth.

The Summer Nationals Late Models now take a few days off before returning to action on Thursday, July 22, at Springfield Raceway in Springfield, MO. Catch all the action live on DIRTVision presented by Drydene.

After becoming the youngest winner in DIRTcar Summit Racing Equipment Modified Nationals history two years ago, a now 16-year-old Hunt Gossum has doubled down at Oakshade Raceway, winning the Modified portion of the Birthday Race for the second time in his career.

“I love this place,” Gossum, of Mayfield, KY, said in Victory Lane. “Every time we come here, it’s always a great racetrack.”

Gossum started on the outside pole and made his trip around the 3/8-mile look easy, despite some tough competition from behind. With Modified big dogs like Chad Bauer, Dylan Woodling and Curt Spalding in his rearview the entire time, Gossum never cracked once under the pressure.

Several cautions were thrown over the 25-lap affair, which meant Gossum had to play superb defense on the restarts. Which, he did. Five times, to be exact. His biggest challenge came from veteran racer Spalding, who chased the #99 in the closing laps but could not get close enough to attempt the pass.

“On the race receiver, I heard ‘5CS’ behind me, so I knew it was Spalding. I know he’s fast, so I was just trying to protect the bottom and it worked out,” Gossum said.

Gossum sailed across the line with a 1.5-second gap to collect his first $1,500 check of the season, while Spalding, Woodling, Brian Ruhlman and Bauer completed the top-five.

The Summit Modifieds are back in action Sunday night, July 18, for a day without the Late Models to accompany them at their annual visit to the half-mile Terre Haute Action Track in Terre Haute, IN. Catch all the action live on DIRTVision presented by Drydene.