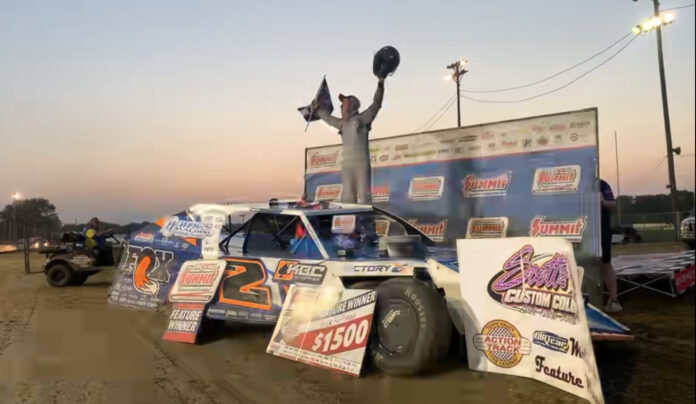 TERRE HAUTE, IN – ighteen DIRTcar Summit Racing Equipment Modified Nationals races have been contested so far this season. Nick Hoffman has now won 83 percent of them.

With his 15th victory in 15 starts Sunday night at the Terre Haute Action Track, Hoffman has written yet another chapter in his master volume of domination over the DIRTcar UMP Modified world in 2021.

This time, he topped the 35-car field on the fast half-mile of The Legend Terre Haute, which was extra fast Sunday night. Recent rainfall in the area forced the drivers to move up an entire groove to avoid the wet conditions in the corners near the inside guardrail.

This simply gave Hoffman more time to stand on the throttle.

“[The low groove] was up a lane, so I just prepped for that and changed the gear ratio for that,” Hoffman, of Mooresville, NC, said in Victory Lane. “Just made the straightaways a little bit longer, a little bit different than what we would normally run here, but this thing is just running really well.”


After setting a new track record of 22.077 in Qualifying and winning his Heat Race, Hoffman redrew fourth best – his deepest spot on the starting grid all season. But that only held him back for a short time, as he passed Jacob Rexing on the first lap, Will Krup on the third and Hunt Gossum for the lead on a Lap 4 restart using a daring outside groove charge.

“I’ve made that pass a lot of times here – the way I got around Hunt and Will. Just charge into Turn 1 really hard and you almost just free skate all the way across the center of Turns 1-2, then you gotta traction back up and try and drive off Turn 2,” Hoffman said.

From there on out, it was all Hoffman in control. Nobody was able to challenge the Elite Chassis #2 as he cruised to his 53rd career Summit Modified victory, tying him with six-time champion Mike Harrison for most all-time.

This win comes just one day after an impromptu visit to a track he’ll see again very shortly on the Summit Modified tour – Fairbury Speedway. Hoffman and his crew originally had plans to race a UMP Modified special at Charleston Speedway on Saturday night but landed in Fairbury after Charleston’s cancelation. Long story short, he ended up in Victory Lane at FALS, too.

High-banked quarter-miles to big, flat half-miles, his formula for winning this number of races in a single season works just about anywhere.

“Gotta hustle it really hard to try and get to the lead, then once I got to the lead, just try and slow the pace down a little bit and just cruise,” Hoffman said.

The Summit Modifieds will now get four days off from competition and regroup Friday, July 23 for the second appearance of the season at Tri-City Speedway in Pontoon Beach, IL. Catch all the action live on DIRTVision presented by Drydene.