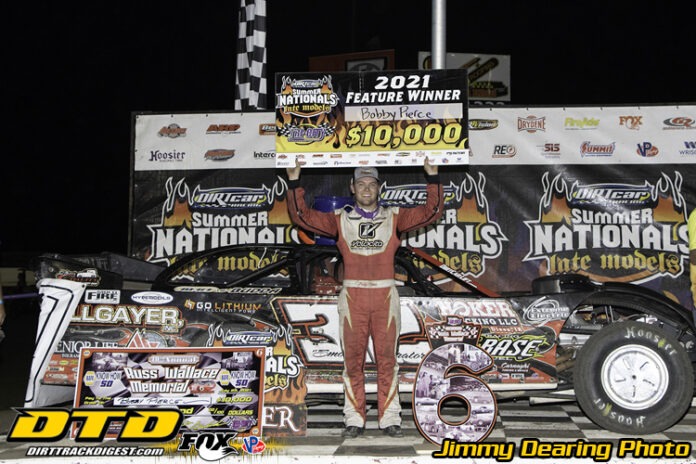 All three sons were in attendance and took part in the unveiling of two special tribute paint schemes, paying homage to Russ’ asphalt and dirt cars that saw Victory Lane numerous times in the 1960s-70s. Both tribute Late Models were piloted by brothers Gordy and Trevor Gundaker in the 40-lap Feature.

Leading the final 29 laps, Pierce put on yet another clinic, winning by over 3.5 seconds in the caution-free event that took just over 11 minutes to complete.

“That was like old Tri-City right there, to a T,” Pierce, of Oakwood, IL, said in Victory Lane. “When I grew up racing here, that’s just how it was, and it fits my driving style to a T.”

However, the night did not begin exactly how the three-time champion would have liked.

“We had so much stuff to do from qualifying to Heat Race, with the issues we had. Luckily, we got it all turned around. What could’ve been a bad night was the best night it could’ve been,” Pierce said.”

But when the green flag dropped in the Feature, it was almost as if he hadn’t missed a beat all night, solidly holding his ground inside the top-five in the opening laps as he battled with Tanner English, Ryan Unzicker and Shannon Babb for second.

A racy, multi-groove track surface allowed Pierce to pass all three of them right on the bottom by Lap 9, then switch up to the top to hunt down then-leader, Mitch McGrath.

McGrath, of Waukesha, WI, looked to be having his best night of the season after a Heat Race win set him on the front row of the Feature. He led the first 11 circuits before Pierce caught him in traffic and threw a big slide job on him in Turns 3-4 to swipe the lead on Lap 12.

Pierce soon after dropped the hammer and checked out, leaving the rest of the top-five in the dust and lapping up to fifth place by the time the checkers were thrown to collect the $10,000 check.

Unzicker held onto second to claim a season-best finish, while Ashton Winger won the battle with English in the closing laps to come home third. English bagged his 14th top-five of the season in fourth while Babb rounded out the top-five.

The Summer Nationals Late Models are back in action Saturday night, July 24, at Clarksville Speedway to continue the Week #6 competition with another $10,000 on the line for the winner. Catch all the action live on DIRTVision presented by Drydene.

Harrison regains sole possession of No. 1 on all-time wins list at 54

After 25 long, hard-fought laps around the Tri-City Speedway, the streak has officially come to an end. Mike Harrison has dethroned rival Nick Hoffman from atop the DIRTcar Summit Racing Equipment Modified Nationals podium and ended his dominant stretch of 15 wins in 15 starts.

Harrison, the one and only six-time Summit Modified champion from Highland, IL, grabbed the lead from Will Krup on Lap 3 and never looked back. Leading the final 23 laps, blasting around the top side like he so often does, Harrison drove away from Hoffman for his 54th career tour victory and reclaimed sole ownership of No. 1 on the all-time wins list.

“I don’t really worry about them numbers a whole lot,” Harrison said in Victory Lane. “I just get behind the wheel and drive.”

Avid followers of the DIRTcar UMP Modified circuit knew this heavyweight bout had been a long time coming. Their previous matchup in the first visit to Tri-City back in June did not go as Harrison had planned, when he got behind after a botched Heat Race effort set him seventh on the starting grid for the Feature, where he went on to finish fourth.

Fairbury Speedway was the venue for Hoffman v. Harrison II, where Harrison looked to be a serious challenger for the lead before getting into the wall while running second. Another meeting came a week later at Lincoln Speedway, where Harrison kept it clean but came up just one spot short.

Heading back to Tri-City for their next clash, both drivers won their Heat Race and started first and third in the Feature. But as soon as the green flag dropped, the fireworks popped off on the track.

“On the initial start, I got a really good run. I knew [Harrison] wasn’t going to be able to hold the bottom, so I just stuck my nose in there and was almost all the way clear, and then we came off Turn 2 and I got tight and got into his left-front. I think we would have been fine, but then under caution he just ran me over,” Hoffman said.

The two did make contact under caution that left Hoffman’s right-rear quarter panel damaged for the next restart – all before the race had yet to officially start.

“I had no side-force getting into the corner, so I was super loose getting in,” Hoffman said.

On a much cleaner start, Will Krup was the one who got the jump and led the first two circuits before Harrison came screaming around on the top to take the lead on Lap 3. Hoffman, starting third, battled for some bite down low but could only muster up enough speed to stay roughly two seconds behind.

Several restarts were plopped in throughout the proceeding 22 laps, and Harrison shut down Hoffman on all of them. Piloting a 2017 Hughes Racing Chassis, Harrison said his crew made the setup changes for the Feature and didn’t tell him about them – at his request.

“They gave me a good car, but I’m telling you right now – it was a handful. So, we’re gonna have to go back and talk about this a little bit because they made me work my ass off.”

Hoffman tried several lanes, anything to gain time and battle back before the checkers, but it was no use. Harrison was too good on the top, where Hoffman’s car was not.

“I just had to go up there and beat it down. I was able to make gains and almost get back to him, but my car’s just not set up to do that. I’m just way too tight up there to do it. Just didn’t work out,” he said.

Harrison crossed the line 1.4 seconds ahead of Hoffman to the sound of a roaring crowd, where they so often see him win on Friday nights throughout the regular season. And though this was far from any regular show, Harrison gave the crowd a lot to remember heading home on this night.

The Summit Modifeds are back in action Saturday night, July 24, at Clarksville Speedway to continue the Week #6 competition with another $1,500 on the line for the winner. Catch all the action live on DIRTVision presented by Drydene.