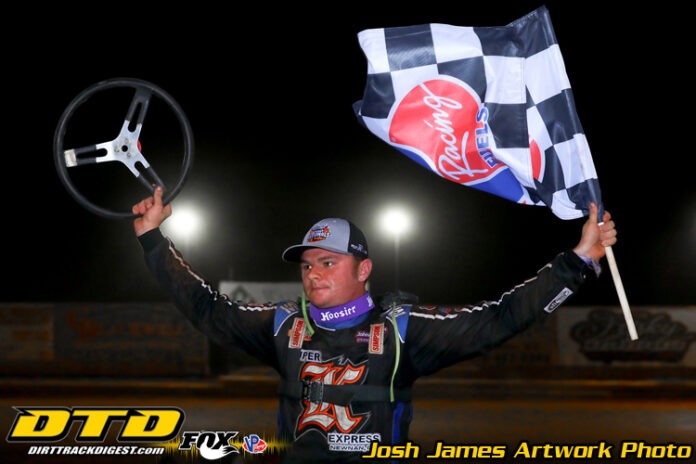 CLARKSVILLE, TN – Nearly two-thirds of all DIRTcar Summer Nationals Features contested this season have been won by two drivers, both under the age of 25. With his fourth victory of the season Saturday night at Clarksville Speedway, Ashton Winger joins that exclusive club, showcasing the youthful talent present on the circuit.

Winger, the 21-year-old wheelman from Hampton, GA, grabbed hold of the quarter-mile red-clay oval and took it to the field, leading all 40 laps en route to his second $10,000 payday of the season.

“This car is really fast right now, and it’s fun to drive,” Winger said in Victory Lane. “I’m glad we’re getting in stride at this part of the year because we get to race every night.”

The driver that crossed directly behind him was none other than the three-time Hell Tour champion, Bobby Pierce. Pierce, the 24-year-old hot shoe from Oakwood, IL, with 10 Summer Nationals wins thus far, worked his way up from eighth on the starting grid, using both the high and low grooves to make timely passes and get to the front.

Both of their nights could have easily been abruptly ended, however, in the big pileup wreck in Turns 3-4 that started right in front of Winger just past the quarter-way mark. Michael Siebers, Robert Andry and a host of others spun and stacked-up in the corner, but did so in a way that formed an opening right through the middle of them, where Winger’s car immediately darted to.

He slammed on the brakes and made the fit through the wreckage, just as he was about to barrel through and pile-in.

“I think Jesus definitely took the wheel there,” Winger said of his perspective from the driver’s seat. “We got lucky there, sometimes it doesn’t work out like that.”

Winger got a great restart and once again pulled away from the field. Pierce picked his battle back up with Joe Godsey and Dennis Erb Jr. for third, while Tanner English rode ahead of them in second.

Pierce soon pulled the trigger on the top lane and zoomed past Erb Jr. and English into second, soon making a beeline for leader Winger. But in the end, Winger was just too smooth through the middle for Pierce to makeup the gap.

The Georgia boy navigated through traffic well in the late stages and brought home the win with a 1.682-second gap to Pierce, who extended his points lead over English with yet another podium finish.

The Summer Nationals Late Models are back in action Sunday night, July 25, for their debut at Richmond Raceway in Richmond, KY. Catch all the action live on DIRTVision presented by Drydene.

Just one night removed from this first runner-up finish of the entire season, Nick Hoffman went right back at it on Saturday night at Clarksville Speedway and won his sixteenth DIRTcar Summit Racing Equipment Modified Nationals Feature.

It was another 25-lap drive of perfection by the three-time and defending champion, as he led every lap en route to the $1,500 payday and his 54th career Summit Modified victory – once again putting him in a tie for most all-time with six-time champion Mike Harrison.

But this run didn’t exactly get off to the greatest start from inside the Hoffman cockpit.

“I knew the initial start was gonna be the race, really,” Hoffman said. “I hit the fence down the front straightaway and was really worried about getting a right-front flat going through Turns 1-2. But we kept the air in it.”

Hoffman’s biggest challenger was the seven-time UMP Modified winner in local Clarksville action so far this year – Trent Young. Young stayed top-three the entire race and cracked the whip in the final circuits but could not make up the gap.

“Trent was hustling pretty hard at the end and made me step it up there,” Hoffman said.

Hoffman had himself some issues in the final stretch as well.

“There was about five or six to go, and I entered in on the cushion in 1-2 and something broke in the right-rear or left-rear, I’m not really sure. I was just kinda hanging on from there,” Hoffman said.

And hang on he did, savoring the victory at a track he won both races at in last year’s back-to-back show to make it a three-peat in 2021.

The Summit Modifieds are back in action Sunday night, July 25, for their debut at Richmond Raceway in Richmond, KY. Catch all the action live on DIRTVision presented by Drydene.