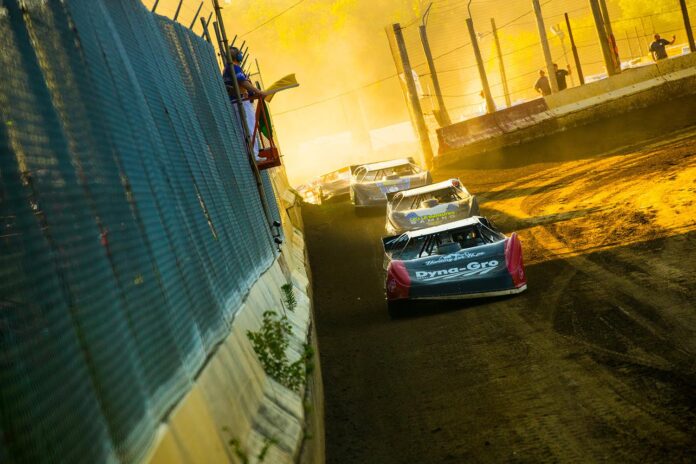 HIGHLAND, IL – After two-and-a-half weeks away from competition, the DIRTcar Summer Nationals gets set to enter the home stretch of the 36th annual tour with two makeup races this Fri-Sat night – Highland Speedway on Aug. 13 and Federated Auto Parts Raceway at I-55 on Aug. 14.

The DIRTcar Summit Racing Equipment Modified Nationals will join the Late Models in the weekend swing, ending a two-week break since their most recent appearance in the 31st Prairie Dirt Classic at Fairbury Speedway.

After that, it’s off to Michigan for Championship Week, where both champions will be made official in the season-ending finale at Merritt Speedway on Aug. 21.

If you can’t make it to the track, catch all the action live on the newly redesigned DIRTVision presented by Drydene.

LAKE CUMBERLAND CANCELED – The tours’ debut at Lake Cumberland Speedway in Burnside, KY, which was rained out on July 26, has officially been canceled and will not be made up. No suitable reschedule date could be found that works for all parties.

This will make both tours a 29-race season, still tying the record for the most races completed in the 36-year history of the Summer Nationals, which was set in 2010 and tied in 2014. $29,000 is now the highest amount of money the Late Model champion can earn, provided each of the remaining races are completed. Every driver’s finish will be counted toward their overall points total.

DOOR’S WIDE OPEN – After two successful outings with the World of Outlaws Morton Buildings Late Model Series, Nick Hoffman will continue his duties behind the wheel of the Scott Bloomquist Racing Drydene #0 Late Model for the coming weeks. Thus, the three-time Summit Modified champion will not be in attendance for any of the remaining races on the schedule, capping his season at an incredible 19 wins in 20 starts.

This leaves the door wide open for the entire DIRTcar UMP Modified world to come in and grab a victory before the season’s out on Aug. 21 – six chances in all. Six-time Summit Modified champion Mike Harrison, the only driver to defeat Hoffman on tour this season, is expected to attend both Highland and I-55 and will be a favorite to win at both venues.

Treb Jacoby, of O’Fallon, MO, is the current UMP Modified points leader at I-55 and is also expected to be in attendance this weekend. Jacoby wheeled his Beak Built Chassis #J82 to a runner-up finish on July 3 at Fayette County Speedway, marking his best career finish.

English, of Benton, KY, sits 186 points behind leader Bobby Pierce in the chase for the championship, heading into two tracks Pierce knows very well. Historically, Highland and I-55 have been Summer Nationals staples, and Pierce won with the Hell Tour at Highland in 2017.

However, good fortune and blessings have recently come over the English family, as Tanner and wife Mallorie welcomed their first child to the world together on Wednesday. With three top-fives in his last three starts, the good fortune and strong finishes have the potential to combine for one special weekend at the track.

JUST PEACHY – Ashton Winger is making himself look like less and less of a Hell Tour “rookie” every weekend. The 21-year-old wheelman from Hampton, GA, scored his second career World of Outlaws Feature win in the postponed Thursday night portion of the USA Nationals at Cedar Lake Speedway last weekend, beating Chase Junghans to the stripe by just .107 seconds to secure the $6,000 prize.

Winger returns to the Hell Tour this weekend in search of career win #5 at two Summer Nationals staple venues – Highland, a track he’s never been to before, and I-55, where he won a Feature in local competition last year.

BI-STATE BATTLE – Since the first weekend in April, a special Late Model points championship tally has been kept between select events at Highland and I-55, offering a $5,000 grand prize to the points leader at season’s end.

This Saturday will mark the 13th race of the miniseries. Michael Kloos leads the charge into Highland with the points lead and three Feature wins so far this year at the quarter-mile, accompanied by two checkered flags at I-55. Jordan Bauer is second in points with one win at Highland, trailed by Mark Voigt, who won the series opener at Highland on April 3.

ROOM FOR SECONDS – 2013 Summer Nationals champion Brandon Sheppard, of New Berlin, IL, will saddle up with the family-owned #B5 at both tracks this weekend, marking his second stint with the tour this season.

B-Shepp scored two victories in five starts during Week #3 and is coming off a strong weekend with the World of Outlaws at Cedar Lake, bagging two top-five finishes in the USA Nationals behind the wheel of the Rocket1 Racing machine.

He’s been downright dominant the past few years when he unloads at I-55, taking the checkered flag in each the last three Summer Nationals appearances at the high-banked third-mile oval (2017, 2018, 2020), plus a win in the Karl’s Chevrolet 50 last year.