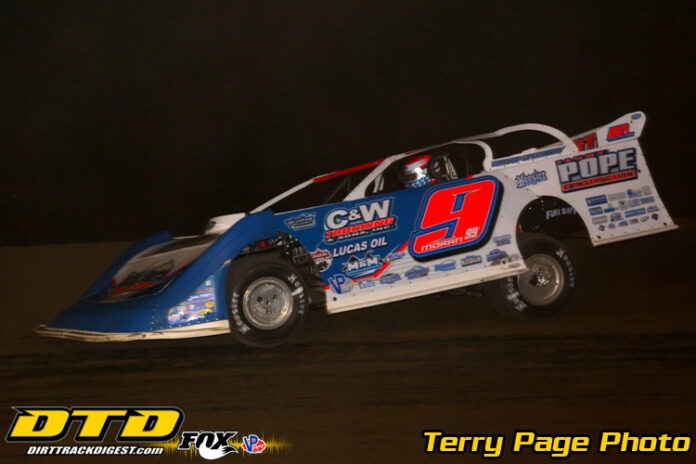 LAKE ODESSA, MI – Seven starts, two wins. Devin Moran has made his 2021 DIRTcar Summer Nationals campaign a short one, but a very sweet one.

After grabbing his first checkered flag on tour back in Week #1 at Kankakee County Speedway, The Mailman cashed-in again Thursday night at I-96 Speedway, leading all 40 laps en route to his third career Hell Tour victory.

“I felt like we were gonna be good as long as I didn’t make a big mistake, and that’s kinda what happened. We kept pace and it all worked out,” said Moran, of Dresden, OH.

A win in the opening Heat Race set Moran up for a Feature starting spot on the outside front row, where he jumped out to the early lead at the drop of the green. He took that jump and extended it out to a five-plus-second lead before the first caution erased it on Lap 18.

Moran held the top spot through another restart before jetting out to a solid lead again, and soon reached slower traffic with points leader Bobby Pierce, of Oakwood, IL, right on his tail. Pierce closed the small gap quickly and looked to make a move on Moran, now impeded by traffic.

With a little patience and some great car control, Moran was able to maneuver through the pack. Pierce got caught-up in the jam, allowing Moran to pull away.

“They were side-by-side, and I was set up a little bit free so I could run the top, so I couldn’t just blast-off down in there,” Moran said of the lapped traffic. “I just kinda had to wait and find the right moment to when my car was going to be able to pass them, and we took advantage of it.”

Continuing to rip the top side like he had been all night, Moran kept it steady on the wall-less 3/8-mile and appeared to have it in the bag when the caution flew one final time with two laps left. Bobby Pierce had been showing smoke for the previous 4-5 laps and took his Pierce Platinum #32 pit-side and would not return, fearing engine issues. Travis Stemler, of Ionia, MI, also gave up his spot inside the top-10 and headed pit-side after running on the podium earlier on.

Moran dropped the hammer on the green-white checkered finish and led the field back around to the checkers unscathed, collecting his second $5,000 check of the season.

“I watched some videos on the place, and it kinda seemed like the top was the place to be,” Moran said. “It got kinda sketchy though – the cushion got almost all the way off the end of it, so I had to be tip-toeing there at the end.”

The Summer Nationals Late Models return to the unique Tri-City Motor Speedway on Friday, Aug. 20, for the next-to-last race of Champions Week and the 2021 campaign. Catch all the action live on DIRTVision presented by Drydene.

The young gasser from Mayfield, KY, has done it again. Sixteen-year-old Hunt Gossum parked it in I-96 Speedway Victory Lane Thursday night after a dominating performance in the 25-lap Feature.

Using the low side of the fast 3/8-mile, Gossum seemed as though he was on rails, rapidly pulling away from his competition en route to his second DIRTcar Summit Racing Equipment Modified Nationals Feature win this season.

“After the Late Model race, I knew they were all up top,” Gossum said. “I thought [the Modifieds] were all gonna be up top, so I went down low in Turn 1 on the start and there was a lot of grip down there.”

Jeffery Erickson took the lead in the opening laps as Gossum mounted his charge from behind. By Lap 3, he had taken second from his fifth-place starting spot and made a bee line for the leader.

With Erickson riding the low-middle groove, Gossum was able to hug the ultra-bottom lane and pick up the plentiful speed to make the pass on Lap 6.

From that point, there was no stopping the Elite Chassis #99. Each lap, he padded his lead a little more, even with sections of slower traffic in his path. Even a few rapid-fire cautions in the final laps could not shake his concentration as he cruised to the $1,500 payday.

“Stick guy right here – he gave me a big enough lead, so I figured I’d just stay on the bottom and ride around until the checkered flag,” Gossum said.

The Summit Modifieds return to the unique Tri-City Motor Speedway on Friday, Aug. 20, for the next-to-last race of Champions Week and the 2021 campaign. Catch all the action live on DIRTVision presented by Drydene.