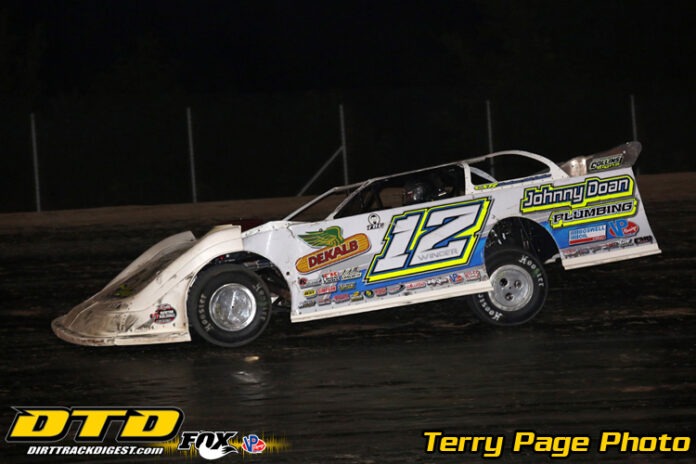 AUBURN, MI – When the pressure’s high and the money’s on the line, Ashton Winger only seems to perform better.

Leading Friday night’s DIRTcar Summer Nationals Feature at Tri-City Motor Speedway with only a handful to go, the 21-year-old DIRTcar Late Model ringer had a solid lead in traffic and looked as if he was going to cruise to his third $10,000 payday of the season. With the wave of the white flag and a dive down into Turn 3, a spinning lapped car appeared right in his path, bringing out the caution.

Winger took evasive action and was able to avoid getting caught-up in the incident, keeping him as the leader for the restart. But now, a fast and hungry Devin Moran sat on his rear bumper for the restart – a one-lap shootout for all the marbles.

Winger mashed the throttle at the drop of the green and mounted a small gap to Moran, but Moran’s plan was already unfolding. He went high in Turns 1-2 to build momentum and sailed it deep into Turns 3-4, looking for a last-corner slide job for the win. But Winger was not to be denied.

The two bumped and banged wheels coming to the stripe, and Winger was able to hang on for the win by .197 seconds over Moran.

“I was just trying really hard. I wanted to win. I probably should’ve leaned on him a little harder, but I just don’t really race that way,” Moran, of Dresden, OH said.

“I’m thankful for him racing me clean,” Winger, of Hampton, GA said. “He could have roughed me up there, because he drove by me like three times.”

Moran did, in fact, drive by people multiple times – only to have them ruined by caution flags. Once while going for second around Winger while Brandon Lance spun, and another a few laps later when Moran took the lead from Heckenast before Brandon Thirlby and Joe Godsey looped it in Turns 1-2.

This would have frustrated some drivers, but Moran kept his cool and stayed with it through the plethora of yellows.

“I wanted it green all the way – I felt like my car was really good once we got rolling,” Moran said. “I wasn’t very good on restarts. I just couldn’t get going.”

After the Thirlby/Godsey caution that sent Moran back again, Winger noticed the speed Moran had when passing for the lead on the bottom and decided to try it himself on the following restart. And it worked, especially when his car took off on the bottom lane.

“With the shape of the racetrack, it’s just hard to start on the top. I fired really good one time on the top of Tanner, and then we got together a little bit, and I fired good again and got by him,” Winger said.

Tanner English, of Benton, KY, had another solid night with a fourth-place run, but lost more points on his lead over Winger for runner-up in the standings. Unofficially, it appears the two drivers will be tied for second in points heading into the final race, with an extra $3,480 on the line.

The 2021 Summer Nationals season comes to a close Saturday night when the Late Models make their return to Merritt Speedway for the fourth time in tour history. Catch all the action live on DIRTVision presented by Drydene.

DID IT AGAIN: Gossum Beats Michigan Regulars at TCMS for Back-to-Back Wins

Coming into the final week of the DIRTcar Summit Racing Equipment Modified Nationals in Michigan, young Hunt Gossum said did not expect to win any of the four races. Now, after three complete, he’s already won two.

“It’s something about Michigan out here. Awesome racetracks, always racey. Something about the bottom down here, it’s always good,” Gossum said.

However, Gossum was forced to deal with the wrath of polesitter Jeffrey Erickson ahead of him for the first half of the 30-lap contest. But, a well-handling car and plenty of grip in the bottom lane gave him the edge he needed to make the pass for the lead on Lap 15 – one he would not surrender as he crossed the line unchallenged for his fourth career victory.

“I was following Jeffrey there for a while. I didn’t think I was gonna be able to get around him, and then he kinda bobbled down in Turns 3-4, and I just got a patch of grip and got around him,” Gossum said.

The 2021 Summit Modified season comes to a close Saturday night when the tour makes its return to Merritt Speedway for the fourth time in tour history. Catch all the action live on DIRTVision presented by Drydene.