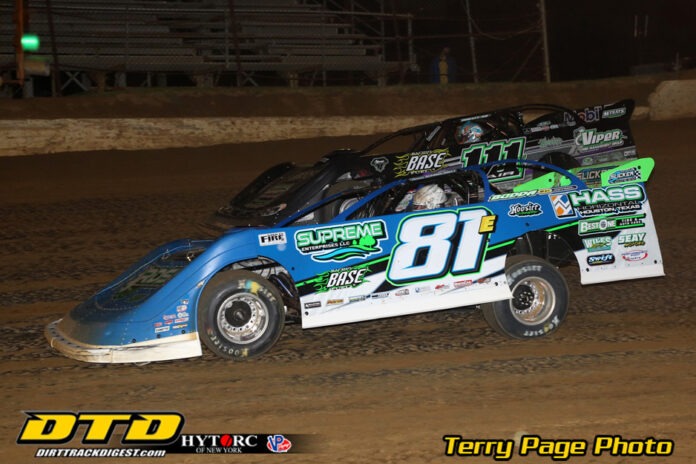 Dillard and his S&S Fishing & Rental/Black Diamond Race Cars #97 slowed significantly coming out of Turn 4 and pulled to the infield, done for the race. He and crew chief Donnie Pederson took a look underneath the car and saw the broken drive shaft yoke that caused the loss of power to the rear wheels; their hopes of a first career Hell Tour victory now dashed.

The Robeline, LA-driver led 37 consecutive laps before the breakdown and was maintaining a near one-second advantage over second-place Tanner English, but ultimately came up just two laps short of the $5,000 grand prize.

“Around the five-to-go area, Donnie was telling me I had a decent little lead and we were pulling away,” Dillard said. “Right before I broke, I got comfortable and just made sure to hit my marks, and figured as long as I didn’t mess up, it was ours.

This handed the lead over to English, who encountered a fierce challenge to his outside from a high-flying Bobby Pierce in the final two laps, but held on for his third career Summer Nationals victory.

“I thought [Dillard] thought the race was over, I didn’t really know,” English recalled when he saw the #97 slowing. “I saw the green flag come out, and that meant two-to-go, and then he pulled down. I didn’t know what had happened.

“I just hate it for him, because I’ve been there.”

Dillard was in the midst of turning around a train of bad luck in his first two Summer Nationals starts this week – which consisted of a DNQ and an 18th-place run Wednesday at Adams County Speedway – qualifying quickest in his group, then winning his Heat Race and redrawing the outside pole for the Feature. He and the team worked hard, and though it didn’t end how they envisioned, they were proud of the efforts they made to get there.

“It’s just me and Donnie, and we’re working hard,” Dillard said. “I know it’s a lot of miles no matter where I go race. It’s a lot of work and a lot of time away from home. To be able to put yourself in position to win these things is good because they’re hard to come by.”

“To let one slip away from me like that is tough, but we’ll keep working hard and try and put ourselves in position.”

English celebrated in Summer Nationals Victory Lane for the first time since his win at Tri-City Speedway last year after a charge from 10th on the starting grid. He made crucial, quick passes toward the end of the race that set him up to be in position when Dillard broke at the end and get the win.

After starting fourth, Pierce came back from as deep as seventh at one point to finish second. The Oakwood, IL-driver was able to make the top groove work in the closing laps, and nearly stole the win out of Turn 4 coming to the checkered, crossing the stripe just .159-seconds after English.

Max Blair, of Centerville, PA, crossed in third for the third-straight time this week. Ryan Unzicker was fourth, and Brian Shirley completed the top-five.

The DIRTcar Summer Nationals clashes with the World of Outlaws CASE Construction Equipment Late Model Series in the two-day St. Louis Firecracker Faceoff Friday-Saturday, June 24-25, at Federated Auto Parts Raceway at I-55. If you can’t be at the track, watch every lap live on DIRTVision.