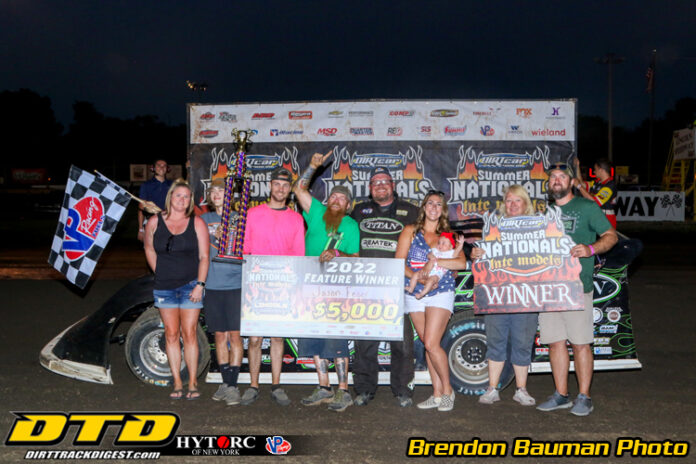 First, a cut tire while leading his Heat at Fayette County forced him to come from the tail of the Feature to finish eighth on Thursday. Then, another cut tire while running up front in the Feature at Paducah on Friday set him back again.

With 10 laps remaining Sunday night at Lincoln Speedway and leader Bobby Pierce getting away in traffic, it looked as though he’d have to wait yet another day.

A slow car on the backstretch brought out the yellow, restacking a spread-out field in traffic that had been under green-flag conditions since the beginning. Feger now sat third in line behind only Ryan Unzicker and Pierce; Brian Shirley and Shannon Babb behind him.

The green dropped and Feger jumped to the high side, making the move around Unzicker for second and getting a good run on Pierce for the lead as they headed toward the stripe to complete Lap 33.

Feger got such a bite off the top in Turn 4 that he slipped right inside a closing gap between Pierce and Unzicker to his inside; three-wide they crossed the line with Feger only inches ahead. Then, a slide job from Feger to seal the pass into Turn 1, Pierce way up top and Unzicker rolling the bottom.

“I didn’t know what happened,” said Feger, of Bloomington, IL, describing his view from the cockpit of the madness unfolding. “I went into Turn 1 and slid Bobby and came out with the lead. I was thinking I was gonna get crossed-over.”

Feger drag-raced Unzicker into Turn 3 and had the advantage by corner exit. But behind him, Pierce was hot on the case, and made contact with Unzicker at the apex of the corner, sending him around and bringing out the yellow again.

“I heard the yellow come out and thought ‘Oh no, Bobby’s gonna get the lead back,’” Feger said. “I’m like, ‘Shoot, I’m definitely not going to win now.’ I guess lucky for me, it was [Pierce and Unzicker] that got into it. I don’t know what happened, I guess it was just a hard racing deal it sounded like to me.”

Under yellow, Unzicker and Pierce were determined to be part of the caution and were both sent to the rear of the field for the restart. This handed the lead over to Feger with seven laps left and four-time Hell Tour champion Babb right behind him.

The field went back to green, and the battle was on for the lead; Feger hustling the high side and Babb looking to make the pass down low. With the white flag in the air, Babb got a great bite off Turn 2 and briefly nosed ahead into the lead. But Feger’s momentum up top pulled through and defended against Babb’s last-ditch effort in Turn 4 to hang on and score his first Summer Nationals victory of the season.

“Shannon raced me clean there at the end, and I thought he had a chance to throw a slider on me and he didn’t do it,” Feger said.

Finally, Feger’s luck had turned around. He finished off what had been a trying week with a $5,000 check in the air and a grandstand packed full of fans cheering as he celebrated in Victory Lane for the 22nd time in his Summer Nationals career.

“It just feels good to finally get the monkey off our back,” Feger said. “We’ve been really fast the whole tour, and I feel like we’ve had a car capable to win every night, but just had some back luck and haven’t been in a position to get it done.”

The Summer Nationals takes the next three days off and resumes Thursday, July 7, at Macon Speedway for the 42nd running of the Herald & Review 100. If you can’t be at the track, watch every lap live on DIRTVision.