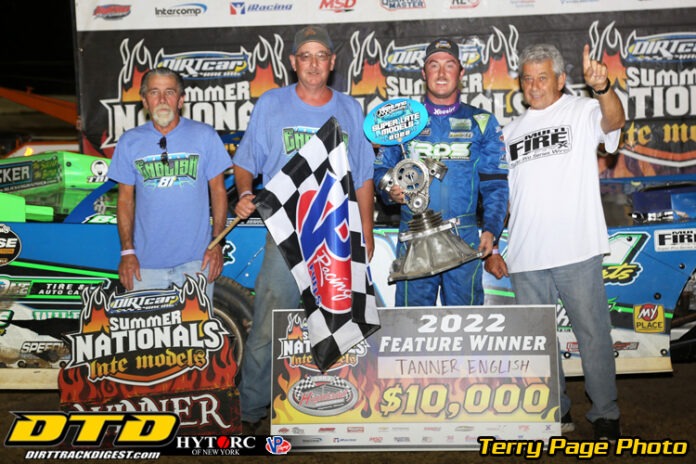 It’s a great achievement for the Riggs Motorsports driver originally from Benton, KY – nearly one year past his most recent season as a full-timer on the Hell Tour, in which he won once in 29 starts. This year, he’s won twice in only 11 starts on tour, while also chasing Rookie of the Year honors aboard the World of Outlaws CASE Construction Equipment Late Model Series.

A trip slightly over 90 minutes from his residence in Benton, IL, English chose to head to Highland Speedway Saturday night, and it paid off, winning $10,000 against a stout field of St. Louis-area and Summer Nationals regulars.

Outside polesitter Jordan Bauer turned heads early as the local favorite from nearby St. Jacob, leading the first 33 laps of the race before English made the move on him after a restart.

“Jordan was doing a heck of a job up top, really setting the pace, he was fast,” English said. “I had to make sure I hit the bottom on that restart and just try to get a run off them tires. I knew there was traction there, I just didn’t know how good my car was because I hadn’t gotten down there yet.”

Starting fourth on the grid, it looked as though English was going to have to run down Bauer and polesitter Bobby Pierce in traffic for a chance to pass them with the longest green flag stretch from Lap 3 to Lap 20. It was in that period when he knew he had a serious chance for the lead.

“When they got to lapped traffic and I caught back up to them and I knew I wasn’t going very hard, I knew,” English said. “It looked like they were using their stuff up pretty hard. I just knew if I held by own and bided my time, I could pick them off if they kept up top there.”

Once he made the pass for the lead, multiple caution flags in the final 15 laps forced English to play smart defense out front with drivers like Pierce, Shannon Babb and Jason Feger right behind him – all of whom are previous Highland Summer Nationals victors.

“I didn’t know if I needed to go to the bottom there on that first lap [after the restart] or not,” English said. “I knew Bobby [Pierce] was starting on the outside and he was going to have a run going.

“But then again, I passed him on the bottom, so I knew the bottom was fast.”

Though Babb slipped past Pierce for second in the final laps and gave it his all to cut into the two-second gap ahead of him, he could not close enough on English, who zoomed across the line for his fourth career Summer Nationals victory.

Babb crossed in second with Feger in third, while Pierce slipped back to fourth. Rusty Schlenk recovered from a blown engine while racing Friday night in Ohio, making the six-plus-hour trip out to Highland to come and round-out the top-five.

The DIRTcar Summer Nationals Late Models are back in action to cap-off Illinois-Indiana Week Sunday night, July 10, at Tri-State Speedway in Haubstadt, IN. If you can’t be at the track, watch every lap live on DIRTVision.