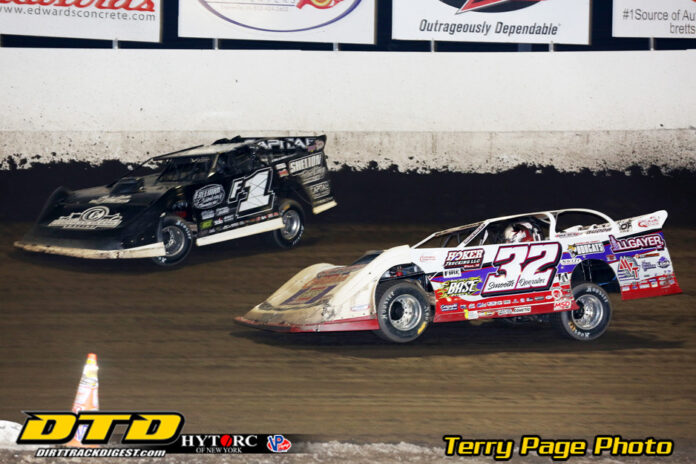 HAUBSTADT, IN – In the ultimate showing of rookie vs. veteran, a packed Tri-State Speedway was treated to a memorable show in the DIRTcar Summer Nationals’ return for the first time in over four years Sunday night.

It was a high-speed chase through lapped traffic, starring two of the Hell Tour’s brightest young stars – four-time and reigning champion Bobby Pierce versus Payton Freeman – the rookie from Commerce, GA, racing the high banks of Tri-State for the first time.

Freeman beat Pierce out of Turn 2 to take the lead on the opening lap, using the famed Tri-State cushion to its max, charged with momentum from the outside lane. He led the first 13 circuits of the race on the ragged edge, with more urgency in traffic than he’d ever shown before, surprising even Pierce.

“It was kinda like last night, I really had to get up on the wheel if I was going to catch and pass [Freeman],” Pierce said. “He was doing good, and then we got in lapped traffic and we were getting through there well.”

Catching the tail of the field only five laps in, Freeman pulled Pierce through traffic until the yellow came out 11 laps in, erasing the sizable gap he’d established.

On the restart, Freeman launched strong, but so did Pierce. Freeman sent it in hard on the cushion in Turns 3-4 and caught a right-rear full of black dirt, slowing him down just enough for Pierce to pounce with a slide job for the lead into Turns 1-2. Freeman answered back with a slider of his own in 3-4, but Pierce sealed the deal with another slide job back by the F1 in Turns 1-2.

“I had a really good restart, and he just made that one bobble there when I had a good run off of Turn 4 that allowed me to slide him in 1,” said Pierce, of Oakwood, IL. “He came down [to my pit area after the race] and I was like, ‘Heck, we could’ve done that the whole race, it was a lot of fun.’”

Now in control of the race, Pierce immediately tried to run away and hide, but Freeman didn’t back down. Another restart three laps later saw Pierce get the jump and Freeman following within a second-and-a-half. Back into traffic the two went, staying within two seconds of each other, weaving in-and-out of multiple waves of slower cars.

“When I got to lapped traffic, it was kind of the same thing – just get by them as quick as I can,” Pierce said. “It got hairy there a few times.”

Pierce appeared to be pulling away even further in the final laps, until the caution was displayed one final time with eight laps left on the board. Though he got another good jump on the restart, Pierce knew all it would take was one mistake for the field behind him to have a shot at the lead.

“I knew even when I was in second, it’s hard to get a good enough run on someone and slide them unless they make a mistake,” Pierce said. “So, I was just trying not to make any mistakes for those first few laps.”

In the end, Freeman was unable to catch Pierce, coming up nearly three seconds short of his first Summer Nationals win at the line. Pierce crossed comfortably for his fifth triumph on tour this season.

The DIRTcar Summer Nationals takes Monday and Tuesday off before returning to action Wednesday, July 13, in the tour’s debut at Montpelier Motor Speedway. If you can’t be at the track, watch all the action live on DIRTVision.