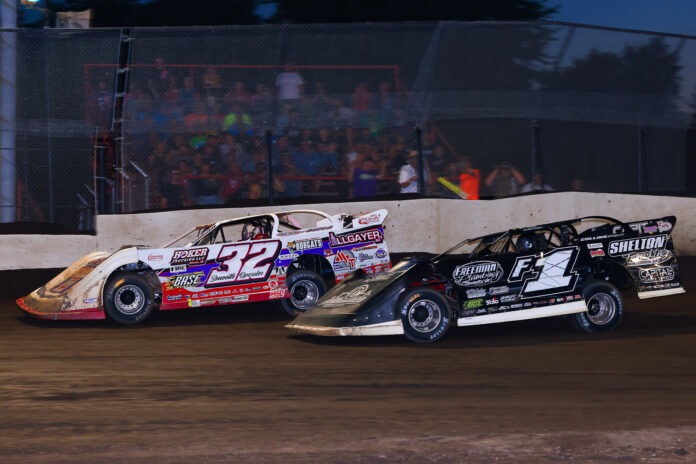 MONTPELIER, IN –  Two-thirds of the 37th annual DIRTcar Summer Nationals campaign is complete. Four weeks are in the can with two remaining, and the points leaders are increasing their gaps en route to their fifth career championships.


Tickets for each event will be available at the gates on race day. If you can’t make it to your favorite track, watch all the action live on DIRTVision – online at DIRTVision.com or with the DIRTVision mobile app.

Here are the drivers to watch for and the storylines to follow this week:

FIRST TIME FOR EVERYTHING – One-hundred-four different tracks the DIRTcar Summer Nationals has visited in its 37-year history. Wednesday and Sunday, No. 105 and 106 will be added to the list as the Late Models visit Montpelier Motor Speedway and Wayne County Speedway for the first time.

Montpelier will likely suit the Summer Nationals regulars’ taste, standing as the 10th quarter-mile track raced on so far this season. Though the track has hosted Super Late Models in the past, no Late Model touring series as large as the Summer Nationals has passed through the Northeast Indiana venue. It’s also a weekly hotspot for DIRTcar UMP Modifieds, serving as a Saturday night race place for names like Derek Losh (five wins in six starts), Zeke McKenzie (winner on May 14), Todd Sherman (seven podium finishes) and track points leader Tony Anderson.

Wayne County is also a weekly DIRTcar-sanctioned track for Modifieds. Colton Shaw is the current track points leader with two wins, but one driver has stood above the rest recently. Kyle Moore, of Mansfield, OH, won a whopping 14 Features there last year en route to his second-straight DIRTcar UMP Modified Ohio Region championship, and has won four times in four starts this year. In 2020, Moore was the winningest driver in the nation, collecting 23 total DIRTcar-sanctioned Modified victories in 30 recorded starts – one win more than the national champion that year, Nick Hoffman.

CLOSING ON THE CROWN – As the 37th annual Summer Nationals schedule winds down into the last third, defending champion Bobby Pierce is rapidly closing in on his fifth career championship.

He takes a season-high 168-point lead into Tri-State Week with nine points races left. With 19 races already completed, this creates a potential $31,000 champion’s check if all nine remaining races are completed.

Though Tri-State Week features one race in Illinois (at Farmer City), eight of the next nine venues are in either Indiana, Ohio or Michigan, where Pierce has, statistically, not been as dominant. Only five of his 45 career Hell Tour victories have come in those states. However, he did win three times in nine starts in those states on the road to his fourth title last season.

Only a driver’s best 12 finishes are counted toward the overall points total in the Summit Modified standings. Should Hoffman win at least once over the remaining 11 race dates, he will have maxed-out his win total for the fourth-straight season.

The Mooresville, NC-driver has only four Summit Modified race dates remaining on his calendar – Wednesday at Montpelier and Thursday at Shadyhill before concluding with two nights at Fairbury Speedway for the 32nd Prairie Dirt Classic, July 29-30.

ROOKIE RUNNER-UP? – Though he sits 317 points back in the standings, Payton Freeman has a chance to make up some serious ground on Pierce and claim a runner-up spot in points before the season’s out.

He currently sits 149 points out of second-place and is projected to surpass that gap in the coming races, which means a potential $12,400 could be waiting for him at season’s end, provided all 28 races are completed. As has been the case all season, the Hell Tour’s top rookie has never seen any of the remaining tracks on the schedule but is determined to get a Feature win before the tour is out. His runner-up finish to Pierce on Sunday at Tri-State Speedway could be a big indication of a Victory Lane trip in the near future.

MAILMAN RETURNS – Devin Moran, of Dresden, OH, has all five races of Tri-State Week on his schedule and will be among the favorites to appear in Victory Lane with two races in his home state on Saturday and Sunday night.

The former World of Outlaws Rookie of the Year stepped away from the full-time national touring scene for the 2022 season in favor of a more pick-and-choose schedule, in which he’s won six times in 51 races. He won two races in the two full weeks he spent on the Summer Nationals trail last year and shoots for his fourth career victory with the tour this week.