MONTPELIER, IN – Not even Mother Nature could hold back the determination of Bobby Pierce Wednesday night.

After a rain shower delayed the program, the DIRTcar Summer Nationals’ debut at Montpelier Motor Speedway took the green flag for 40 laps around the 1/4-mile. Pierce started from fifth on the grid and worked his way through positions four and three in the first 20 laps, getting around Joe Godsey and Payton Freeman in the bottom lane – a place few others dared to venture out.

“The bottom was really good, it really surprised me,” Pierce, of Oakwood, IL, said in Victory Lane. “I was talking with some buddies up in the grandstands about it, and I was like, ‘I don’t think the bottom’s gonna come in.’ But it shocked me, it did.”

Now with only Billy Moyer Jr. and leader Devin Moran still in his path, Pierce could smell Victory Lane stronger with every lap completed. Moran and Moyer were the first to reach lapped traffic, and when they both faltered behind the slower cars, Pierce took advantage, getting by both cars on the bottom.

A few final restarts in the final 10 laps tested Pierce’s concentration at the drop of the green, but neither Moran nor Moyer could get the jump they needed to make up the gap, and Pierce drove away with his sixth victory on the Hell Tour this year.

Devin Shiels, of Britton, MI, crossed the line fourth in his first appearance of the season on tour, while Summer Nationals rookie sensation Payton Freeman, of Commerce, GA, bagged his second-straight top-five finish in fifth.

The DIRTcar Summer Nationals Late Models are back in action Thursday at Shadyhill Speedway in Medaryville, IN. If you can’t be at the track, watch all the action live on DIRTVision.

When a tough field of local powerhouses came knocking, Nick Hoffman answered the door with authority.

The four-time and defending DIRTcar Summit Racing Equipment Modified Nationals champion encountered the largest field of opponents he’s faced all season with 32 total Modified drivers in the Montpelier Motor Speedway pit area Wednesday night. Loaded with Montpelier’s fierce weekly field and several of the region’s top contenders, not once did Hoffman crack under the pressure. 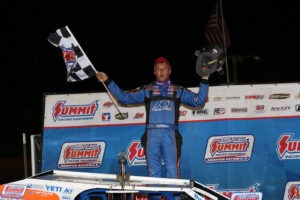 Starting on the pole for the 25-lap Feature, Hoffman was beaten to the line on the first lap by local ringer Todd Sherman, who led the field around for the first four circuits before coughing up the lead to Hoffman on Lap 5.

“He was just sliding himself, trying to protect the bottom there,” said Hoffman, of “Once he got into that position, he was just vulnerable down the straightaways.”

“It really killed his exit momentum, and I was able to come down the hill and out-motor him down the back straightaway.”

Hoffman threw a slide job into Turn 3 and made it stick, taking the lead and bringing it all the way back home unchallenged for his 69th career Summit Modified Feature win, and 12th of the season. This gives him his fourth-straight season with a maxed-out win total, as only a driver’s best 12 finishes count toward the tour points standings.

The DIRTcar Summit Modifieds are back in action Thursday at Shadyhill Speedway in Medaryville, IN. If you can’t be at the track, watch all the action live on DIRTVision.