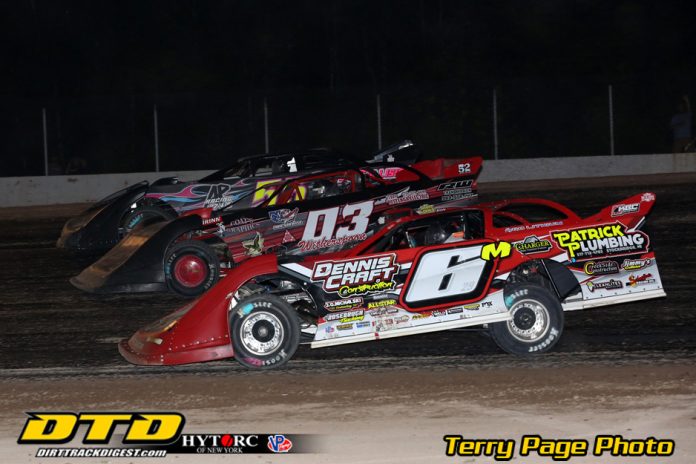 Two seasons ago, it was a late pass for the lead that sealed his first Hell Tour triumph. Friday night, it was a display of dominance by the 38-year-old from Houghton Lake, MI, as he led all 40 laps around the 3/8-mile oval to score another $10,000 and his second career victory with the series.

“I love Tri-City,” Marcoullier said. “It’s the kind of place that levels-off, where there’s no motor – it doesn’t matter. You can have the best car; you’ve just got to be able to drive it. That’s why I like the place so much.”

The night went well for the 6M team, qualifying atop their group and winning Heat Race #4, earning Marcoullier an outside pole starting spot in the redraw. At the drop of the green, he wasted zero time, slipping past polesitter Cody Bauer with momentum on the high side to take the lead on the opening lap.

“The tire fired good, I didn’t screw-up, I didn’t push, and I just got good momentum running,” Marcoullier said. “That’s really how this place runs – you’ve just got to keep the car rolling; you can’t bend the car because there’s no traction. There’s no cushion.”

From there on out, it was Marcoullier’s race to lose. The race went caution-free in just over 10 minutes total, which meant Marcoullier was never forced through a restart and could stretch his lead – which went nearly as wide as five seconds at one point.

Though Marcoullier’s progress through lapped traffic was slowed at various points, the field behind him was unable to catch him. Once Billy Moyer Jr. got to second on Lap 23, he began reeling the leader in slightly, but never got closer than three full seconds back.

Ultimately, Marcoullier went unchallenged for the win and completed the first-ever Michigan sweep of the Hell Tour after fellow Michigander Collin Thirlby won the DIRTcar Summit Racing Equipment Modified Feature earlier on in the evening.

The win also counts as his third DIRTcar Late Model Feature triumph in four starts at TCMS this season. He did it in his older Black Diamond Race Cars chassis, but it’s the one he knows best, and has built on it since he began winning more often.

“I think it’s just growing up racing my whole life and not having the best equipment,” Marcoullier said. “We’ve always had smaller motors, older cars, and you just learn how to make those cars work.

“Now, we’ve got some better pieces, and we can shine.”

The DIRTcar Summer Nationals is back in action Saturday, July 23, for the penultimate round of competition at Merritt Speedway in Lake City, MI. If you can’t be at the track, watch all the action live on DIRTVision.