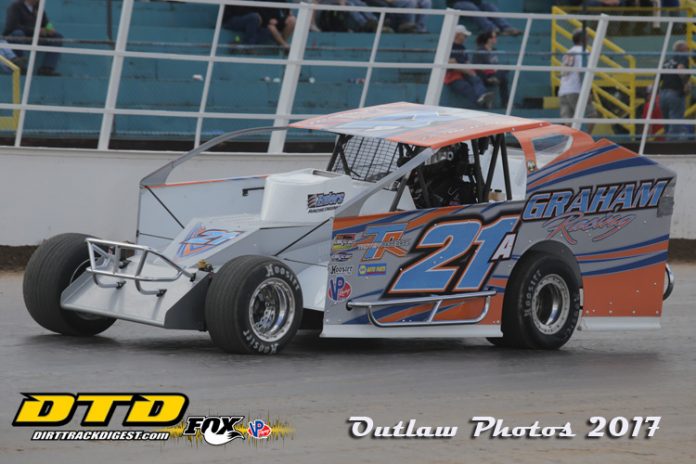 The Australian standout, Peter Britten, is excited to announce he will be teaming up with Ray Graham to chase the 2018 Super DIRTcar Series championship.

“I’m looking forward to starting our second season in dirt with a driver I feel is ready to break out,” said car owner, Ray Graham. “Not only is Peter talented behind the wheel but extremely knowledgeable of the cars and extremely hard working. We will work hard and do the best we can and have some fun along the way.”

After a top-ten finish in the point series last season in his familiarly owned No.21a, Britten is grateful for this opportunity to be running for Graham.

“There’s a lot of pressures in racing,” added Britten. “I always take a lot on my plate but not having to necessarily worry about the financials of the team and figure out how to pay the next bill to go racing again is huge. It takes one of the burdens off of my shoulders and allows me to focus on my job to win races.”


Graham believes everything works well because of the chemistry and hard work of those involved. “Peter and I approach things very similar,” Graham said. “We’re always trying to learn and make our car better each time on the track. Peter and my sons team also hit it off right from day one so I’m looking forward to seeing the whole team gel and improve this year.”

Not only is Britten excited but he is also confident with the new team combination.

“Whenever Ray is involved in anything, he’s fully in,” added Britten.” The beauty is he will be hands on which is a big plus. He’ll be another eye at the track which will be a lot stronger. Being involved with him is great for my career.”

After an astounding run at Super DIRT Week last year, Troyer Race Cars and Kevin Enders will once again be an active part of the team.

“I would really like to thank Bill Colton and Kevin Enders who will be supplying the cars and motors,” noted Graham. “They worked together as a team great last year when we put the package together for Super DIRT Week so I’m looking forward to seeing the progression those two will make for our team.”

Troyer Race Cars owner, Bill Colton, looks to not only help the team win races and the championship, he looks to help improve their product and provide information to pass on to his customers.

“Peter has been instrumental in helping Troyer improve our cars,” Colton said. “We are looking forward to building on the momentum we had at the end of 2017. We only ran a few races with Ray last year, but it really seemed that his involvement really made Peter and the whole team better.”

The first race of the season for the Graham Racing team will be at the Land of Legends, formerly known as Canandaigua Speedway, on Saturday, April 14th.

“We’ll be doing a lot of racing at Canandaigua,” added Britten. “We’re going to start off running there and take it as it goes. If we’re running good there and it seems valuable to us, then we’ll stay. Being a new team, we want to get some more races under our belt, so we’ll do whatever is best for the team at the time.”

The first Super DIRTcar Series race will kick off at Fulton Speedway on Saturday, April 28th for the High Bank Holdup.