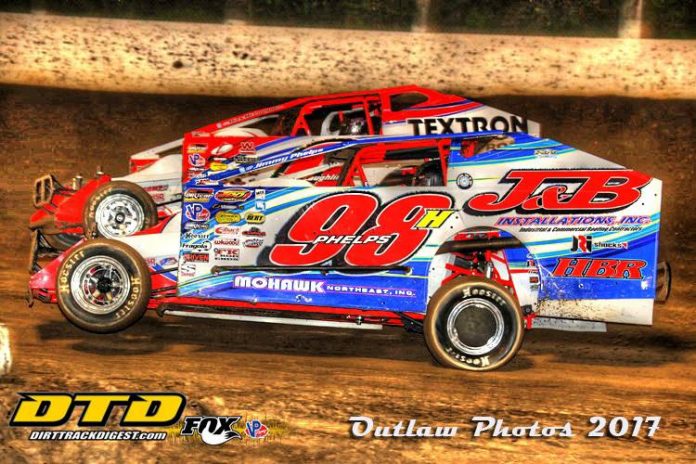 With racing season right around the corner, the Heinke-Baldwin Race team is excited to announce their 2018 schedule.

We will once again find the acclaimed duo competing at Brewerton Speedway in Brewerton, NY on Friday nights.

“In my opinion, Brewerton is still one of the best tracks in the country,” added Jimmy Phelps. “We won a bunch of races and a few championships there. We seem to run well there so I’d like to go after another championship.”

The Baldwinsville Bandit, Jimmy Phelps, closed out the 2017 season second in the points battle at the fast clay oval while teammate ‘Mad’ Max McLaughlin finished in a strong fourth-place.


“I felt really good at the end of the year because the last four weeks we were in the top five,” noted Max McLaughlin. “We found some speed late in the year so I’m excited to put together our notes from then with the things we learned at Volusia and win some races.”

Unlike years in the past, the team will have a new Saturday night home at the half-mile dirt track in Canandaigua, NY – Land of Legends Raceway.

“I’m looking forward to going back there,” noted Phelps, who ran weekly at Land of Legends Raceway in 2012. “I’ll miss Fulton. It’s been my home since I was a little kid, but we’re racing big blocks so we have to go big block racing. Canandaigua isn’t a whole lot further so it’ll be any easy transition for the team.”

With success from years in the past, Phelps is looking to grab his first championship at the fast half-mile.

“The biggest thing I’m looking forward to is that the place really tells a story of how you’re doing as a driver and a team,” added Phelps. “It’s going to be a good test for us.”

As for McLaughlin, it’ll be his first time running weekly at the Land of Legends Raceway.

“I’ve only run there twice,” McLaughlin said. “I’m excited though. I think it’s a driver’s track; it’s difficult to figure out. It’s a track that will teach you a lot and help you develop as a driver. It’s a slick track that’ll help us a lot on the series.”

Both the No.98H and the No.6H teams will once again compete on the Super DIRTcar Series in contention for the championship title. Both drivers capped off the year with a top-ten in the points chase and are feeling confident going into their first race at Fulton Speedway on April 28th for the High Bank Holdup.

“We always get excited about a fresh start,” Phelps said. “We’ve done our homework and have documented our weaknesses since last year. I think we’ve done a lot of work in the shop and are fortunate enough to get started at one of our better tracks (Fulton Speedway) so hopefully we’ll get things off on a good note.”

McLaughlin struggled on the series at the beginning of 2017 but was able to pick up speed towards the end of the season and is looking forward to picking up where he left off.

“We have a good race package; we just have to work on our qualifying,” noted McLaughlin. “I’m really excited to get racing up here in Central New York with all of the slick racetracks. I think we have a good package for those tracks.”

APPAREL –
The HBR team has apparel available for sale at their racecar trailer during events they compete in this season.