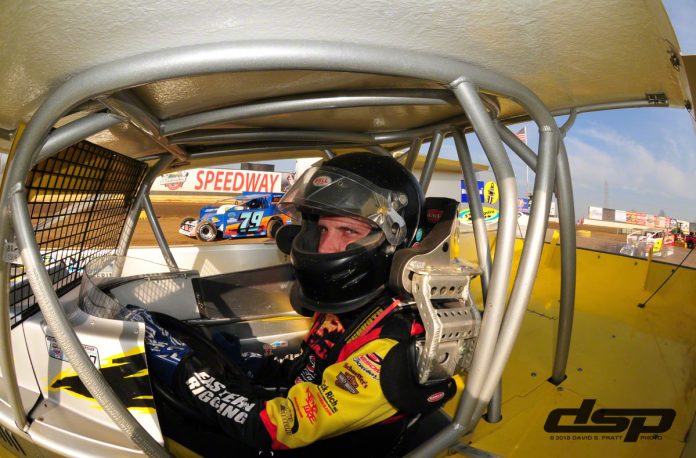 Pauch Racing is proving to be a strong force this season as they rallied four top-ten finishes and two wins this past week at four different tracks, in three different states.

Pauch Jr. qualified forth in his heat, placing him on the inside of the seventh row for the main event.

“We had a really good run going,” Pauch Jr. added. “I was up to fifth with a few laps to go and slid off the track and fell back to seventh. That’s where we ended up.”


Pauch Jr. then went to Big Diamond Speedway Friday night for their season opener in his Kid Racing No.15 Small Block Modified.

Pauch Jr. rolled off sixth in his heat race and made a last lap pass to take the win, placing him into the top-12 redraw.

“By luck of the draw we drew third out of 12 spots,” Pauch Jr. said. “We were able to wrestle the lead away on lap nine. We lost the lead on lap 21 only to get it back on lap 24 and drove away for the win. It was a great way to start the year at Big Diamond, especially with a brand new car.”

Saturday night Pauch Jr. made his first visit of the season to New Egypt Speedway and clinched his second season opener of the weekend.

Pauch Jr. started third and moved up to second in his heat race.

The top-13 line-up was decided by revenge draw. Pauch Jr. was given the eighth starting spot for the 40-lap main event.

“We were able to drive up and get the lead on lap four,” noted Pauch Jr. “We played tire management and was able to salvage the win. We had a really good car on Saturday. It was nice to get the year started off on the right foot.”

With 40+ modified’s and a packed house, Pauch Sr. rolled off seventh in his heat race.

“We were up to fourth, where we needed to be, then I guess I overheated the tires, lost traction, and missed the transfer by one spot,” Pauch Sr. said.

Pauch Sr. continued to the consi and qualified fourth for the 40-lap main event.

“We started close to last,” added Pauch Sr. “We were good early. We got up to the top ten, as far as eighth at one point. Then I started to lose the tires again towards the end. I lost the handle on the handling and backed up to ninth. We went forward, so it wasn’t all that bad. I wanted to win but we’re definitely getting better.”

Pauch Sr. plans on running Big Diamond Speedway this Friday, April 20th, and if all goes well he will be at Bridgeport Speedway on Sunday, April 22nd to test out the new 3/8-mile dirt track.

Pauch Jr. has a weekend full of racing as he will start get his weekend underway this Thursday, April 19th at Georgetown Speedway then to Big Diamond Speedway on Friday, New Egypt Speedway Saturday, and Bridgeport Speedway Sunday.