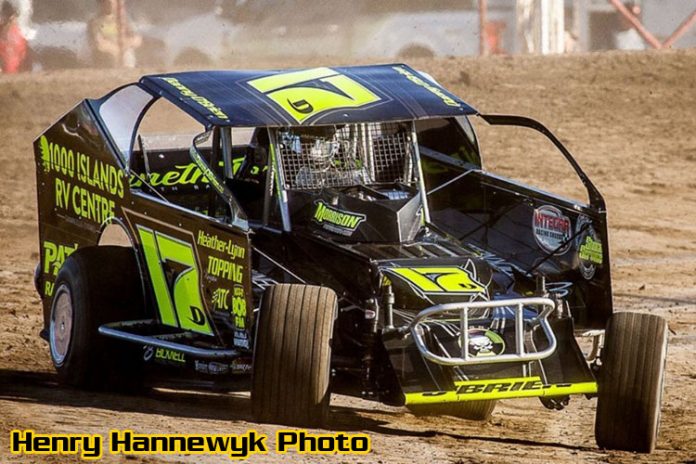 While O’Brien will once again make Brockville his home track for his 32nd season in the cockpit and will make regular appearances at Can-Am Motorsports Park in Lafargeville, NY, he will start his season one week earlier by making a trip to Fulton in Central New York.

“With Fulton, I don’t race there a lot and I haven’t been there in a long time, so we’ll have to take it as we go,” O’Brien explained ahead of Saturday’s event. “The real season will start when we get back up here when Brockville and Can-Am open up. We’re going to go down (to Fulton), have some fun and try to learn some stuff before we come back for the openers.”

In addition to running at Brockville and Can-Am, two tracks which are within a reasonable drive of his Inverary, Ont. shop, O’Brien also plans to make a few special trips outside his home region.

“I hope to hit a couple of different tracks throughout the summer,” O’Brien explained. “I wouldn’t mind going down to Utica-Rome once or twice throughout the summer. If we’re not racing somewhere weekly on Fridays, it gives you the opportunity to do something else once in a while and to race in the fall.”


After 31 seasons of dirt track action, O’Brien still has plenty of motivation entering the new campaign. While he still wants to be competitive at the track and win as many races as possible, he maintains it’s the fun away from the track and in the garage that often keeps him going.

“I just love doing it. We have as much fun in the garage during the week as we do racing it,” O’Brien said. “I have a good bunch of guys and we enjoy doing it together. I have enough people that we don’t have to work too hard and we don’t work every night. When it’s fun, it’s enjoyable.”

O’Brien had a successful 2017 campaign on the track and will return with largely the same package for 2018, consisting of Pat Morrison Engines under the hood of his Bicknell Racing Products chassis. However, O’Brien and his team were far from stagnant over the off-season.

“We fine tuned everything,” O’Brien stated. “We had a good package, but you can’t sit idle. We made sure we had everything we needed, upgraded some parts and changed some to what we wanted. We got our engine program hopefully a little bit better, our car program a little bit better and we’ll see how it goes.”

“We want to thank all of our sponsors for returning this season,” O’Brien said. “They’re a big part of what we’re able to do as a team and allow us to compete at the level that we do all summer.”

After nearly six months of off-season preparation, O’Brien is certainly eager to hit the throttle when the first green flag drops. He continues to stress that having fun is a top priority again this year. Naturally, winning is fun and winning big races at fast tracks is even more fun.

“You pick the tracks you want to go to where we have fun,” O’Brien said. “After 32 years, it gets pretty routine, but there’s some good paying races in this area. There’s a 110-lap (and $10,000-to-win) race on a Wednesday night (in August) at Brockville, so it’s nice to have some good money right in your backyard this year.”