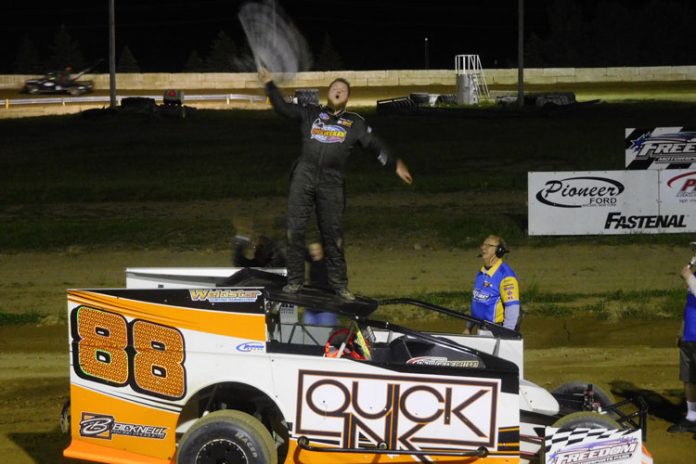 THOROLD, ONT – Shayne Pierce will never forget his Birthday Celebration last summer. The St. Catharines Ontario second generation racer won back to back Prime Time Energy Outlaw Modified Features at Freedom Motorsports Park in early June with his Birthday between the two.
When the 2018 Season kicks off May 11th at the Delevan NY facility, Pierce is hoping to build on 2017 in a run for the Points Title at the Friday Night Track where he finished in 4th spot last season.
“Last year we definitely had some highs with the wins,” remembered the 27 year old Pierce of St. Catharines, “but we also had some lows … fighting some issues with the car.”
Twenty years ago this year his racing career as a rookie Kart Racer at 7 years of age. After 7 years of Tuesday Night action, Pierce would step away from the sport only to build a Street Stock which he would begin racing in 2006. After capturing the Ohsweken Speedway Thunder Stock Title in 2009, a move to the 358 Modified Division would be in store for 2010.
2017 had the father and son team switch to a New Generation Big Block Engine for his first campaign with a ‘home’ track since 2014.
“A Big Block makes you a better driver,” added Pierce, “it gives you lots of opportunity to race as well.”
John Pierce remains a huge influence on his son Shayne. Pierce raced in the former Bomber Division before helping drivers such as Garry Moreash and Rob Devenyi. Shayne’s current engine was built by his Dad and Al Blanchard.
Assisting the Pierces are crew member Scott Bretherick, David Hemphill at the races and Bill Sargent at the shop.
On the walls of his race shop are pictures of others who have influenced his racing including former NASCAR Racer Dale Jarrett, who he shares his 88 with, Danny Johnson, Carl Saunders and Brian Stevens. Formerly of Wainfleet, Pierce adopted the racing-rich Western Hill Region of St. Catharines as his own three years ago March.
Pierce shares the former Ray and Brian Stevens’ house and shop with his girlfriend Ashley Wood and their puppy Kylo.
In addition to his 2015 BRP Chassis, Pierce’s shop also is home to his on line racing equipment. Shayne is a regular Sunday Night No Lift Racing competitor in addition to iRacing.
“It’s pretty realistic, fun and keeps your reflexes up,” said Pierce who works at Central Fabricating and Welding, “maybe the best part of all though … if you wreck it – you don’t have to fix it.”
At the track, the Shayne Pierce Motorsports #88 will once again be sponsored by Quick Ink Custom Screen Printing, New Generation Racing Engines, Williamson Welding, Ohsweken Speedway, Rival Powder Coatings and Sandblasting, Weldstar Custom Fabricating, Platinum Grafx and GMC Detailing.
With the 2018 Season just weeks away, there are opportunities still available with the team. For more information on marketing partnerships – contact Shayne.pierce.motorsports@gmail.com.
To catch Shayne Pierce in action this season check out his schedule by clicking on https://www.facebook.com/140830905979644/photos/a.821843157878412.1073741826.140830905979644/1791857574210294/?type=3&theater
Race Fans can follow Shayne Pierce as well on Face Book at https://www.facebook.com/Shayne-Pierce-Motorsports-140830905979644/ and on Twitter at https://twitter.com/shayne88live?lang=en