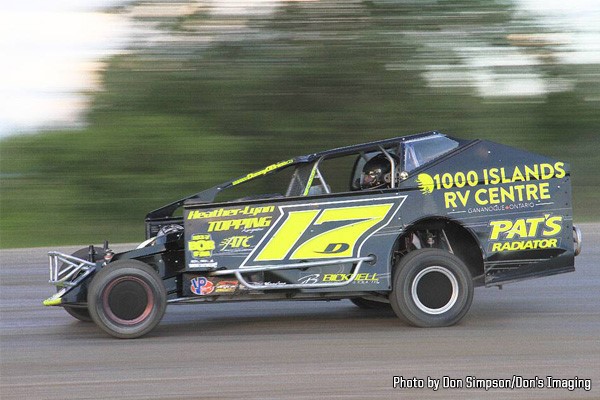 INVERARY, ONT – Danny O’Brien tallied a strong start to his season when he recorded a second-place finish in the season-opening race at Brockville Ontario Speedway last Saturday night. The driver of the 1000 Islands RV Centre No.17D set quick time in time trials and won his heat before starting up front for the 50-lap main event.

O’Brien led until Luke Whitteker was able to get underneath him in turns three and four on lap 49, just as the white flag waved in front of the two drivers.

“We led 49 laps,” laughed O’Brien. “The track started taking patches of rubber and, when you’re leading you don’t move around as much as you probably should, so I missed the rubber and he got by me on the bottom. When you’re leading the race, you get running your line and you think you’re okay, but we came to the white flag and he got back in front of me. It was still a good night though. We’re happy with it.”

O’Brien was also in action on Friday night at Can-Am Motorsports Park, but was involved in an early incident to start the Feature and suffered damage to the car’s rear-end that ended his night prematurely.


After this weekend’s pair of races, O’Brien has now competed in three races to start the season, including his season debut at Fulton Speedway in Central New York a week ago. He now has a top-five and a top-10 to his credit.

“Saturday I think we were good,” O’Brien said of the Brockville opener. “Friday, I really can’t say because we didn’t really get going enough to tell. Down at Fulton, I thought we had a great night, I just don’t race down there enough and it took me half the night to get accustomed to the track. Fulton was a really good night for us considering we started back a ways.”

O’Brien enters the upcoming Victoria Day weekend with a single event on tap.

“We’ll run Brockville Saturday, but we’re going to take a week or two off from other racing to regroup and get some stuff back in shape,” O’Brien explained. “Hopefully the weather stays nice and we can get some good racing in.”

Follow along with Danny O’Brien’s 2018 season of DIRTcar 358 Modified racing on Facebook by Liking his team’s official page, here www.facebook.com/DannyOBrienRacing.