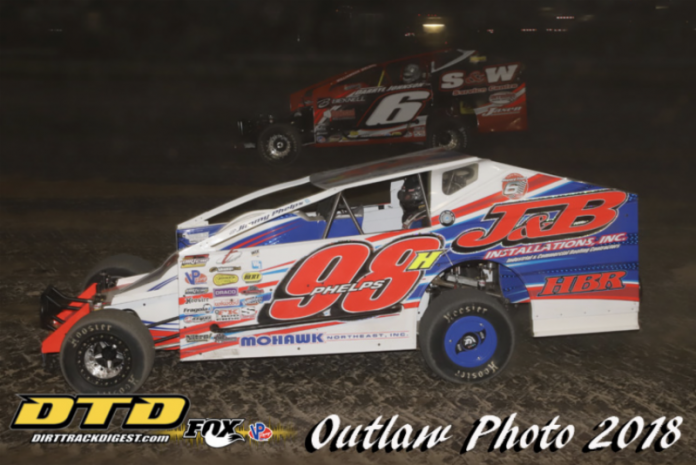 The Heinke-Baldwin race team rallied three solid top-ten finishes in the Empire State this past weekend.

Max McLaughlin opened Friday evening at Albany-Saratoga with a makeup feature from the previous week where he started on the outside of the second row.

McLaughlin’s Friday seemed to have ended as fast as it started.

“The track was fast,” he said. “We fell back early but got a little bit better and started to come back through the field. Keith Flach blew up right in front of us and I had nowhere to go so we ran into him. It took my right front shock off the car, ripped it right off. I went into turn three right after I hit Keith, I couldn’t get the car slowed down in time, so it started to bottom out and I flipped over.”

Saturday evening saw both teams at Land of Legends Raceway.

McLaughlin charged forward to win his heat from his fourth-place starting spot, lining him up eighth for the main event.

“Usually that track is tough on tires, so I was saving my tires,” added McLaughlin. “I was running on the bottom waiting to make a move or for a caution to come out. I waited a little too long and was a little too patient and ended up fifth. It was the first night out in our brand-new car and it was the best we’ve been, but I just waited way too long to go. At least we got a good finish.”

McLaughlin capped off the evening with a solid fifth-place result.

Jimmy Phelps was potent right out of the box Saturday night in his new Teo Pro Car.

“We brought a new car that we hadn’t run yet,” added Phelps. “We wanted to shake it down for Bridgeport. We felt really good.”

Phelps made an impressive maneuver on the first lap of his heat race to pull away with the win.

“We started sixth in the heat,” he said. “We caught a wicked break on the opening lap and was able to pass a bunch of cars in turns one and two and were leading by the end of the first lap. We felt really good about our car. We knew we caught a break, so we didn’t rest on it. We made a few changes for the feature.”

Phelps lined up on the outside of the sixth row for the main event.

“We got into the top three pretty quick,” noted Phelps. “It took longer to get into second than I hoped, which allowed the leader to get away from me. Lap traffic held the leader up, so we were able to run him down, but he was able to get into a clear track before we did so we were never able to make it back up.”

Phelps rounded out the night with a second-place finish in his No.98h machine.

Phelps and his team decided to make the trip to Utica-Rome Speedway on Sunday for the 358 DIRTcar Series race to do some testing.

“At the end of last year, I felt our big block program was on track,” Phelps said. “We had the coil car sitting here and had a 358 motor, so we decided to put a small block in it and do a little testing with the coil car.”

Phelps finished second in his heat race which placed him on the outside of the second row for the 100-lap main event.

“I thought our car was good, just not maneuverable enough. At one point during the feature we fell back to 12th. As the top started to slow we were able to dig our way back into the mix and get sixth.”