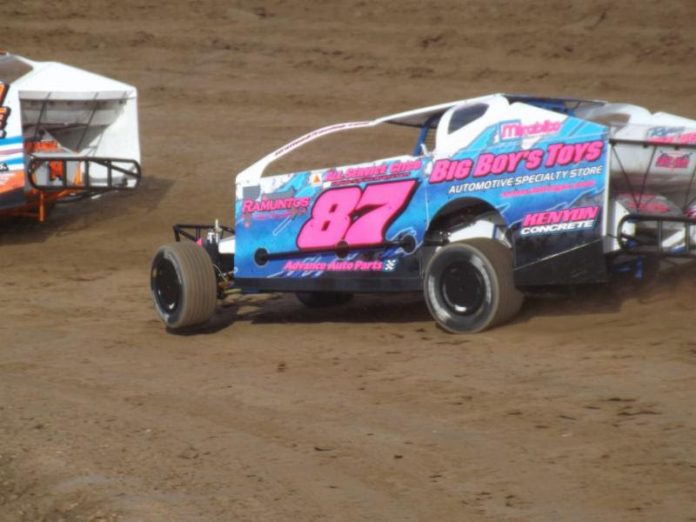 The driver out of Bennington, VT kicked off the night with a makeup feature from the previous weeks rain out.

“We started deep and passed a few cars and the driver made an error,” Stratton said. “I clipped the yuke tire and stripped the pitman arm, which ended that race. I didn’t have any steering after that.”

After thrashing to get the car turned back around for the heat race, Stratton was able to make it back out in time to roll off on the pole of the heat.


“We lead the whole thing and had a straightaway lead,” Stratton added. “The car was good but anything that could go wrong went wrong up until then.”

Stratton’s first race of the season back in April, Albany-Saratoga’s season opener, had ended with a rear end torn out of his car after an accident in the consi. Needless to say, Stratton’s heat race win was just what the team needed.

“Last year we never broke one thing and this year we’ve broken more than I would have expected, but it’s all a part of it.”

Stratton’s heat race win lined him up on the front row for the 35-lap main event.

“Since it was the first week of handicapping, we started on the pole,” noted Stratton. “We lead 25 of 35 laps. The car was really good, then a caution came out. I was doing everything in my power to keep the tires from sealing over. Once we started back up again the car started pushing like a dump truck after that and we faded back to tenth. I never had a tire seal over that bad, so it was a first for me.”

Despite the tires sealing over, Stratton was able to hold on to post a tenth-place finish.

“I know the car is good, we just have to put it all together. It’ll come.”

Neil’s father, Hector Stratton, was scheduled to make his debut last Friday, but due to a few parts missing, Hector was unable to make it to the track. Hector is now set to make his return behind the wheel this upcoming Friday at Albany-Saratoga Speedway.

“Their car should be done for this Friday,” Stratton said. “It should be fun to race with him again for sure. There will be more work in the garage, but hopefully it’ll all pay off.

The Stratton Racing team is slated to reunite the two-car team and take on Albany-Saratoga Speedway this Friday.