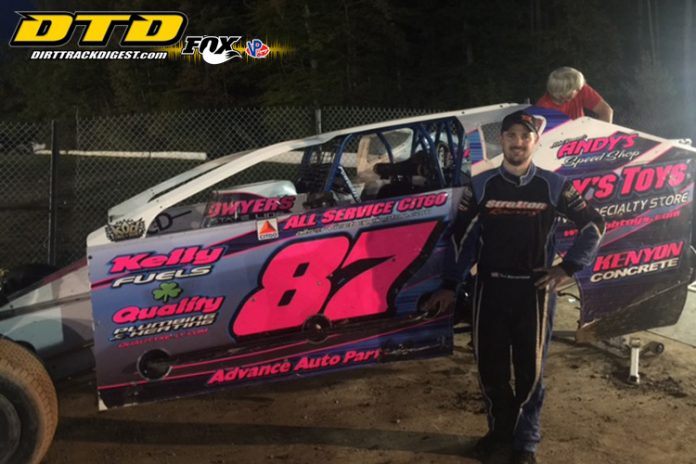 Neil Stratton and the No.87 team are starting to show consistency with two straight top-ten finishes at Albany-Saratoga Speedway.

Friday evening, however, didn’t start off as planned for Stratton and his team at the fast oval.

“The heat race was a little bit of a struggle for us,” Stratton said. “A car spun in front of me going into turn one, so I checked up and two cars went by me. The yellow came out and I figured it was going to be an original restart minus the cars that spun. Instead of doing that, they raced us back to the line which was pretty foolish. We lost two spots and fell back to seventh, so I missed the handicapping but still qualified.”

Stratton was able to rebound and qualify seventh in his heat race, placing him on the inside of the tenth row for the main event.


“The car was pretty good, a little bit off,” added Stratton. “We marched our way forward and kept picking away at it. It was another slick track again which made it tough, but we got back up there.”

Despite early struggles in the beginning of the night, Stratton and the No.87 team are starting to show consistent top-ten finishes at Albany-Saratoga.

“We’re finally going in the right direction after the first couple of weeks. I know we have a top ten car but we’re slowly putting it together.”

Hector Stratton was slated to race on Friday but was unable to make the finishing touches on his car before Friday night’s event.

“They worked until midnight, taking days off, they worked their butts off, and just didn’t get it done in time last week,” Stratton said. “It’s the little things, and you don’t want to rush something like that. They should be set for this upcoming Friday.”