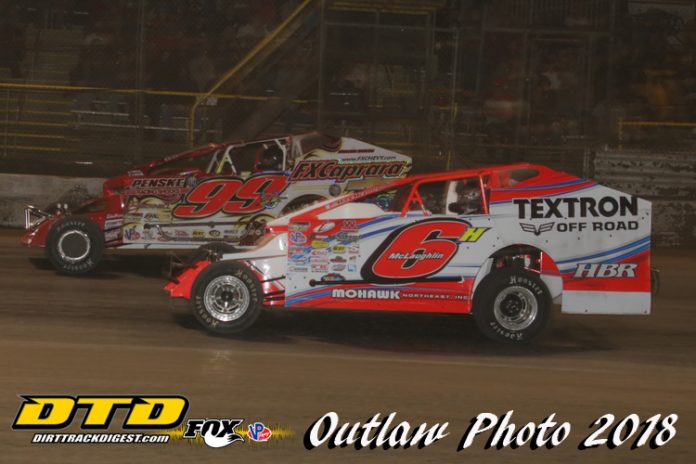 The HBR team made quite the statement on Memorial Day by placing both cars on the podium during the Super DIRTcar Series season opener at Weedsport Speedway for the Heroes Remembered 100.

The team’s weekend got underway Friday evening at Brewerton Speedway.

The ‘Baldwinsville Bandit’ Jimmy Phelps, was fast once again for his second week at Brewerton.

Phelps rolled off sixth and qualified third in his heat race, lining him up on the inside of the seventh row for the main event.


“It was almost a replay of opening night at Brewerton,” added Phelps. “We got to the front, but the leader beat us there. We were basically going the same speed but couldn’t get by him.”

Max McLaughlin started fourth in his heat and picked off two cars to place second, which lined him up on the inside of the fifth row for the main event.

“Before the Series started we had been trying to experiment with everything we could,” McLaughlin said. “Brewerton was our last chance to really try something. Needless to say, the experiment didn’t work. We ended up having a mechanical failure and didn’t finish. We weren’t bad, but we were just maintaining right before we pulled off.”

Saturday saw Phelps and the No.98h team back at Land of Legends Raceway.

“We were too good too early,” noted Phelps. “The track was choppy in the heats. After that we kind of made a bad call in the feature. We thought there’d be more grip than there actually was.”

Phelps rolled off on the outside of the seventh row for the main event and climbed his way into the lead by lap 10.

“We lead until about eight to go and lost the lead,” he said. “We got too free at the end, considering we didn’t make enough adjustments and got second. Things are really moving in the right direction right now.”

Memorial Day Monday saw the HBR teams in their backyard at Weedsport Speedway for the first Super DIRTcar Series race of the season.

“Our group was pretty fast,” added Phelps. “We had a decent car but still timed fourth in group time trials. We had to go to work and make some adjustments and were able to fight our way back into the redraw in the heat race.”

Phelps’ third-place finish put him into the top-12 redraw for the 100-lap main event. By luck of the draw, Phelps drew the outside of the second row.

“We fell back there for a bit and got back into the top three and were chasing down the leaders,” he said. “We lost some steam and had to settle for third with about thirty laps to go. I’m happy with the whole event though. The night was really great, and Max ran really well. To put two HBR cars on the podium, especially at Weedsport, was pretty special.”

McLaughlin’s struggles early on in the season finally paid off Monday evening at Weedsport Speedway with the Super DIRT car Series.

“It’s funny, we were a little off in hot laps, but we didn’t do anything to the car. We figured we’d see if the track would come to us in time trials,” McLaughlin said.

McLaughlin timed second in his group time trial which lined him up second for the heat race.

“I felt like we still had a lot to gain,” he said. “The track really slicked off in the heat, but we put our heads together and made some good adjustments. We were the first ones to make the outside work all night. We got the lead on a restart, got to the bottom first and got the heat win”

McLaughlin’s heat race victory placed the No.6h team into the top-12 redraw for the 100-lap main event. By luck of the draw, McLaughlin drew sixth.

“Right from the green I knew we had a really good car,” noted McLaughlin. “We never really stuck that good in the black like that before.”

McLaughlin drove his way to the front and found himself in second-place with just 25 laps in the books.

“Stew and I battled pretty much side-by-side most of the race,” he said. “I knew I was a little better out of two, but he was good everywhere else. It was going to come down to lap traffic or he would need to make a mistake, but he’s one of the best in the country and doesn’t make mistakes. Just running second to him is a win for most people.”

Both HBR teams proved Monday night that they will be strong contenders on the Super DIRTcar Series this season.

Next on tap for the HBR teams will be Brewerton Speedway this Friday and Land of Legends Raceway on Saturday.