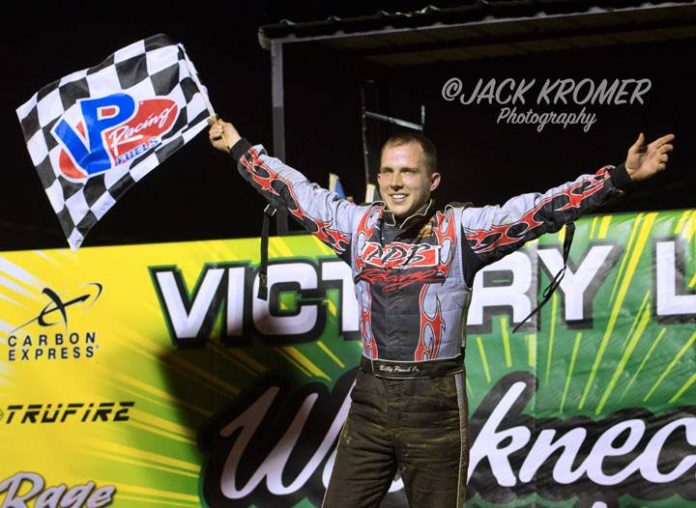 The Pauch Racing team had a busy weekend of racing, posting one win and four top-ten finishes over the holiday weekend.

Pauch Jr. timed second in his group, which lined him up second in his heat race. Pauch Jr. fell back a spot and qualified third, placing him into the top-12 redraw for the main event.

Pauch Jr. rolled off on the outside of the third row for the 50-lap main event.


“We missed the setup and struggled a bit and fell back to 13th,” he said. “Some days you’ll have that.”

Friday evening saw Pauch Jr. back at Big Diamond Speedway in the Kid Racing No.15.

Pauch Jr. finished fourth from his sixth-place starting spot in the heat race which lined him up on the inside of the fourth row for the main event.

“Unfortunately, we got loose at the end and ended up finishing fifth.”

Pauch Jr.’s third straight day of racing had him back at New Egypt Speedway for a special 40-lap event.

Pauch Jr. started fourth in his heat and drove away with the victory.

“We started ninth and got up to second pretty fast,” added Pauch Jr. “At that point we ended up running second with ten to go and broke a fuel pump. It wasn’t a good night. Stuff happens but we’ll come back and get them again.”

“We had the car too tight in the heat and had a hard time passing but made the invert,” added Pauch Sr.

Pauch Sr. rolled off on the inside of the fifth row for the main event.

“The first fifteen laps went nonstop and were up to sixth on that caution,” he said. “We had passed Watt, Willams, and Pratt so we were coming forward pretty good then we had that long caution for the delay with Laubach. That took about a half an hour. I don’t know if the tires sealed up or what but after that the car just wouldn’t go. We dropped to seventh and that’s where we ended up. I feel we have a pretty good direction on the car, hopefully we get it back to where it’s right and get another win.”

Both Pauch Sr. and Jr. were scheduled to run Grandview Speedway on Sunday but due to heavy rain in the forecast the track was forced to cancel the event.

A special event on Memorial Day Monday had Pauch Jr. back at Action Track USA in the SpeedSTR and 600 Micro Sprint.

Pauch Jr. made strides in the micro sprint heat to grab the win from his sixth-place starting spot.

“We started seventh in the micro feature and was able to get third,” said Pauch Jr. “We were a decent car but didn’t catch the right breaks.”

Pauch Jr. capped off the evening with a third-place finish in the Micro Sprint.

Pauch Jr. rolled off fifth in the SpeedSTR heat race and made a late race pass to take the victory, which lined him up on the outside of the fifth row for the main event.

“We took our time and was able to get the lead by lap 17,” noted Pauch Jr. “Tom Mayberry gave us a good challenge, but we were able to withstand them and was able to pick up the ‘W’ and end the week on a good note.”