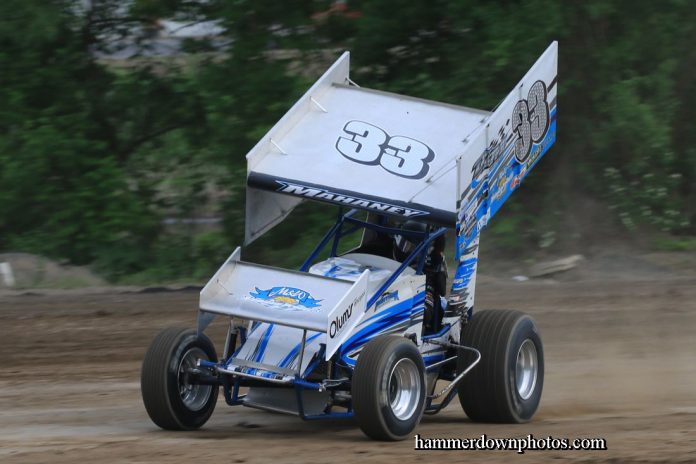 ‘Magic’ Mike Mahaney collected one victory and six top ten’s out of nine races, in a total of seven different cars in the month of May.

Mahaney opened May in the Breitenstein Motorsports No.14 Small Block Modified at Grandview Speedway in Bechtelsville, PA.

“We started 16th and finished 10th,” Mahaney said. “Our heat race was the highlight of the night. We started last and finished third. It’s a really strong team. We were unfortunate we didn’t get to race as much as we hoped to in May due to rainouts and other scheduled conflicts, but we will be back at Grandview more in June and throughout the rest of the season.”

“Orange County was the luckiest draw I’ve had all year,” he said. “We drew eight coming in the gate. We won the heat and drew the pole for the feature. We had a great qualifying effort for the first time out with the Buzz Chew Chevrolet No.88 Small Block Modified. We got pushed around in the feature but managed to come home sixth.”

“We showed up for the opener hoping for a good finish knowing we wouldn’t be able to be there every week,” added Mahaney. “We started seventh in the feature and slowly picked off a few cars throughout the race. We were able to pass the second and third place cars in lapped traffic just in time for a late race caution with two laps to go. We lined up single file behind Andy Bachetti on the restart. We got a great start and were able to sneak underneath him on the last lap in turns one and two to take home the victory in the Olum’s No.21 Small Block Modified.”

The following week, Mahaney strapped behind the wheel of the Doug Emery’s No.33 sprint car at Outlaw Speedway with the Empire Super Sprints.

“We had a very tough qualifying group,” noted Mahaney. “We started 19th in the feature and had a great car. We were able to make it up to tenth. I felt like we had a great car but there was only one caution and it was on lap one which made it really hard to get to the front from 19th.”

Mahaney closed out the evening with a tenth-place finish.

Mahaney and the Buzz Chew Chevrolet team went to Weedsport Speedway for their ‘Ice Breaker’ event.

“We started out the night with a bad draw,” he said. “We were able to pass two cars in the heat race, but it wasn’t enough to make the redraw. We started deep in the feature. We got a left front flat part way through. The crew did a great job to get me back out there. A bolt broke and held us back the last twenty laps of the feature. We ended up 15th.”

Just a few days later, Mahaney made his first trip to Delaware International Speedway in the Olum’s and Eastern Rigging No.33 Big Block Modified.

“We put together a great deal with Eastern Rigging,” Mahaney said. “We’re really fortunate that Ed and Karen at Eastern Rigging got us the tools that we needed just in time to be able to race down south at a new track that I’ve never had the opportunity to race at before.

Our time trial didn’t go well due to limited experience at the track, but we were able to pick some cars off in the heat race to make it into the feature. We started 15th and finished 14th. We learned a lot from the experience. I can’t wait to go back.”

Mahaney made his second trip to Afton Motorsports Park in the No.21.

“This time at Afton we had to start 12th,” noted Mahaney. “We were able to capitalize on a jingle in turn two early and squeeze through from eighth to third in one lap. I quickly got to second. We were right there waiting for a mistake by the leader, but Nick Nye did a great job. We ended up crossing the line in second.”

The day after Afton, Mahaney made the trip to Fonda Speedway with the Empire Super Sprints.

“We timed first overall,” he added. “The invert placed us fourth in the heat race. There wasn’t much of an outside groove early on. We worked very hard to get into the third spot, but a red came out and they reverted back to the last lap, so we missed the redraw by one spot. We went on to win the dash, that lined us up in 13th for the feature. We ended up tenth in the feature.”

“We were second quick in our group in hot laps,” he said. “The track slicked off very quickly, we fell to fourth pretty fast in time trials. We then finished fourth in the heat. We missed the redraw by one which lined us up 16th for the 100-lapper. I felt like we had a fast car. We got shoved into the jersey barrier coming out of two on lap 25. We were the only crash of the night during the feature. We were able to finish the race in 15th even with bent steering. I wasn’t able to turn to the right, so I almost spun out multiple times.”

On a positive note, Mahaney finished every race in the month of May and all in the top-15.

“We got to race a lot in a lot of different cars,” he said.

“We will be opening the month of June with a Canadian swing with the Empire Super Sprints in the Doug Emery No.33 sprint car. The next race for the Olum’s and Eastern Rigging No.33 will be at Big Diamond Speedway with the Short Track Super Series. We will be making our first trip of the year to Action Track USA in the No.33 SpeedSTR in the middle of the month. The following day we will be at Grandview Speedway for a Thunder on The Hill event with the Breitenstein No.14 Small Block Modified. The day after Grandview will be our second Super DIRTcar Series race at Brewerton Speedway with the Buzz Chew Chevrolet No.88 Big Block Modified.”

The month of June will be even busier for Mahaney, but you can stay up to date with his schedule by visiting his website www.mikemahaneyracing.com

All Mike Mahaney apparel will be available for sale at his racecar trailer during events they compete in as well as online at www.mikemahaneyracing.com. 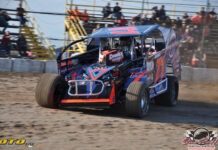 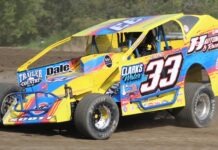