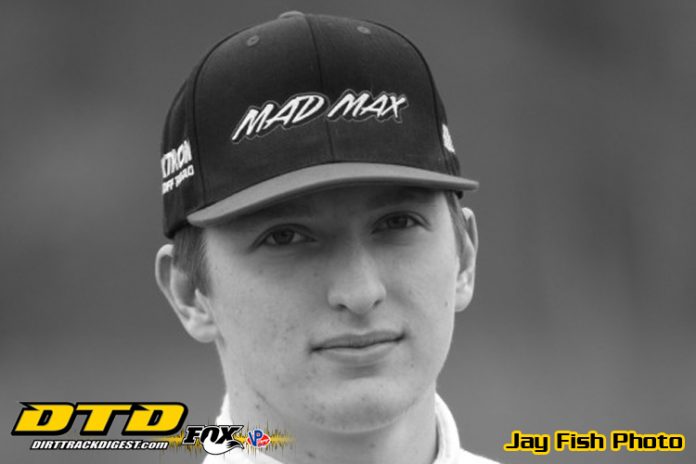 Heinke-Baldwin Racing would like to wish fellow teammate and friend, Max McLaughlin, the best in his future endeavors as he has signed on with Hattori Racing Enterprises (HRE) to race full-time on the NASCAR K&N Pro Series East for the 2019 season.

“This is a tremendous opportunity for me to further my career,” McLaughlin said. “This will be my first concentrated effort in asphalt racing and this will be a big change and challenge.”

After joining the HBR team in 2016 at the age of 16, McLaughlin had much success behind the wheel of the No.6h Big Block Modified.

McLaughlin’s first full season on the Super DIRTcar Series showed promise for the Mooresville, NC native by picking up the Rookie of the Year title and a 13th-place finish in the series point standings.


It wasn’t until 2017 when McLaughlin had his breakout year where he clinched his first two career Big Block Modified victories and placed 9thin the overall point standings.

2018 showed fans and competitors what ‘Mad’ Max was really made of…true grit. McLaughlin came up shy of several victories on the tour but he never gave up on his goal. McLaughlin’s strong outings netted him third in the overall point standings in the prestigious Super DIRTcar Series. Add in two wins at Brewerton Speedway and one at Land of Legends and McLaughlin had his best season to date.

McLaughlin also went on to win the Most Popular Driver award in both 2017 and 2018 with the Super DIRTcar Series.

With much success and many improvements made over the past three years, HBR couldn’t have asked for a better father and son duo to join their stable.

“The contributions made to our program by Max and his father, Mike, are immeasurable,” said owner Al Heinke. “We believe that the timing for Max’s appropriate next step is spot on. His future is bright, and we are glad that Max had his Big Block start with us at HBR.”

Team Manager, Betsy Angelone, has been alongside of McLaughlin, mentoring and cheering him on from the first day at HBR, and is very pleased with how far he has come and where he is headed.

“We are incredibly proud of Max and the work that he did with us,” said HBR’s team manager, Betsy Angelone. “Watching Max was like watching my son come into his own. I feel like a proud parent with all that he’s accomplished. We are all very excited for him and look forward to watching his next chapter unfold.”

“I will still be running the HBR car whenever my schedule allows me to,” noted McLaughlin. “I can’t thank Al Heinke and everybody at HBR enough for the opportunities that they’ve given me. I’m very excited about the future with HRE and to get the season underway.”

With select shows available for McLaughlin to jump back in the No.6h machine, the HBR stable will become a one car team in 2019 with Jimmy Phelps, the ‘Baldwinsville Bandit’, the head driver of the no.98h Big Block Modified.

After a stout season in 2018 where Phelps collected six wins and one track championship, Phelps and the no.98h team are looking forward to kicking the season off on a high note.