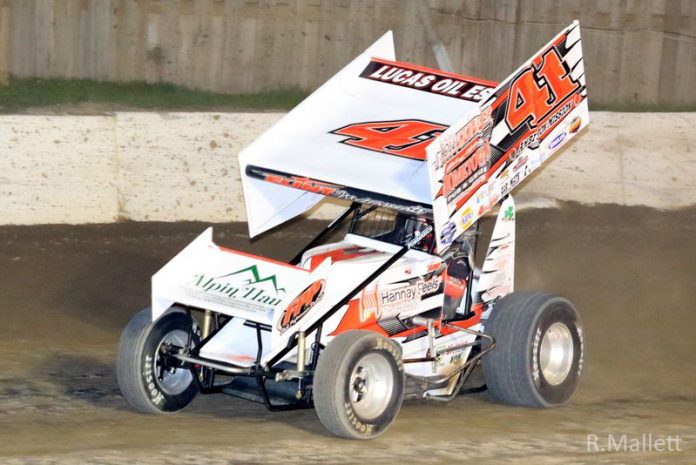 CHERRY VALLEY, NY – One year removed from being the Empire Super Sprints (ESS) Rookie of the Year, Josh Flint is set to embark on another season traveling with some of the best 360 Sprint Car drivers in the country.

Flint, from Cherry Valley, NY, is working hard over this off-season to make his program stronger. He wants it even better than 2018 as he and his Hannay Reels #41 team chase their first career Series victory.

“I’m more focused than I’ve been in a long time to make this team successful,” Flint said. “Coming back from a horrible 2017 and running a majority of the ESS tour last year, being named Rookie of the Year was awesome and makes us more determined to do well as we head into this season.”

With that increased drive comes improvements to the team’s equipment. Josh will be strapped into a new chassis for the 2019 season and with it is getting a little more than just new parts and pieces.

“I was struggling at the beginning of last season with the car we were running,” he said. “Jason Barney from 87 Speed was more than willing to jump in and help. I had him dyno our shocks and he really started helping us get a handle on the car. We hit it off really well and I liked his professionalism. We started looking at the X-1 Chassis that he sells and felt our team needed to head in a different direction. I wanted someone I could compare notes with so Jason and I talked and I decided to get an X-1.”


Having a former champion who’s running the same stuff you are helping you at the track can be huge for a young driver like Josh. That’s something that has him pumped up for what’s to come in 2019.

“We are building this car almost identical to what Jason has,” he said. “It’ll have the same stuff on it, even down to the same Fox Shocks. That way it’ll be easier to compare. Other drivers like Larry Wight and Chuck Hebing are running strong in X-1 cars and I wanted to be apart of that. Jason’s offered to continue support with technical advice along with Ryan Linder from X-1 who is also a driver in PA.”

Flint is also making a change in the powerplant department as well.

“Due to motor issues that have haunted us the past two seasons, we’ve moved our program to Kevin Enders’ shop,” he said. “Kevin and my father have been friends for years so it made sense to go to him. We were doing motors in-house to save money but what we had was old and just worn-out. They really needed help that we couldn’t do to make them more reliable.”

Josh knows to be one of the best in the sport, you need to be prepared, and he’s hoping his team will be much improved during the new season.

“I’m going all in on our program this year,” he said. “The Empire Super Sprints have amazing teams that race with them and if your stuff isn’t 100%, you’re not going to run well.”

Look for more information from the team in the coming weeks, including more on their schedule for the 2019 racing campaign.