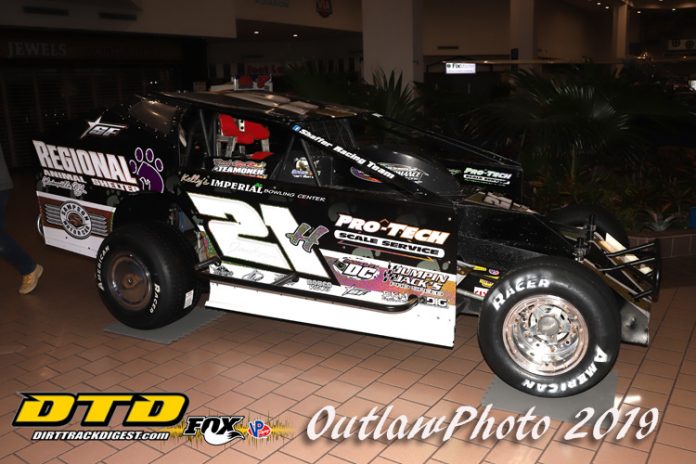 If local Dirt Sportsman drivers “Happy” Harry Shaffer and younger brother Mike Jackson have anything to say about it, the 2019 season has already, “gone to the dogs.” Instead of the negative connotation that the phrase would normally carry, Shaffer Racing will unveil their new cars at the Rotterdam ViaPort this weekend with a positive and familiar organization on each of them dedicated to Gloversville’s Regional Animal Shelter. While the logos have been carried on the popular 1H and 21H cars over the past 5 seasons, the all-volunteer dog rescue has taken top billing on Jackson’s 21H Teo Pro Car.

“We spend quite a bit of time marketing to new potential sponsors and partners for our team,” Jackson stated on Thursday. “…(S)eeking a primary sponsor is pretty difficult for any racing team, and we have  been fortunate in the past. It was clear in late 2018 that I wanted to try something else with the car for this racing season.”

While the sponsor hunt is difficult enough for many of the auto racing teams in attendance at ViaPort Rotterdam’s Northeast Racing Expo this weekend, Jackson’s is even more challenging with his career working at local government agency. Ethics policies often dictate who can even be approached to create marketing, product, and service agreements with Jackson’s racing efforts.

“It is frustrating sometimes, but I have a really challenging and fulfilling job. I have watched several large opportunities pass by my racing efforts over the three or four years, the potential conflicts of interest just are never worth it though.”

So what do you do with an open spot on your racecar’s primary sponsor location? The answer was simple for the 2017 Glen Ridge Limited Sportsman Champ: Give it to Regional Animal Shelter.


“My wife Alexandra began volunteering for Regional a few years ago, her focus was less about an organization and more about helping the animals. She found that and a great group of volunteers at Regional all with a similar goal and focus… (I)t’s really inspiring to watch everything they accomplish from my stand point.”

Based in Gloversville, NY, Regional Animal Shelter is an all-volunteer based organization that operates out of a less than 600 square feet Annex on West Fulton Street. While they manage the ever growing stray dog population in the city, they also advocate for dogs that have been abused, mistreated, or abandoned; ultimately taking the time to care for medical needs, manage behavior, and find ‘fur-ever’ homes for some very grateful pups. Regional also seeks to educate, train, and provide public awareness for the needs of pets and their owners.

Funded primarily through individual contributions, grants, and fund raising efforts, Regional Animal Shelter (unlike other local shelters) spend $0.00 each year on salaries; so any contribution made to the organization benefits the dogs that call their Annex home on a temporary basis. Jackson’s 21H will carry Regional Animal Shelter’s name and recognizable Purple Paw on the rear quarters for 12-16 events in 2019, as the Amsterdam, NY pilot begins his second full campaign at the historic Fonda Speedway in addition to select events at Glen Ridge Motorsports Park.

Both Regional Animal Shelter and Shaffer Racing will exchange in social media promotion, coordinated event attendance (with a partnered adoption event already planned for this weekend at ViaPort Rotterdam), and will participate in a coordinated fundraiser planned by local racer and Regional Volunteer Jennifer Spraker, as well as avid racing fan and community champion Scott Friers on May 4th, 2019 at Fonda Speedway.

Shaffer Racing Team’s goal in all of this is to provide real value to Regional Animal Shelter, bringing their name, vision and efforts to a new audience, as well as provide an incredible platform to market and promote. The most obvious question in all of this- who is paying for all of the logistics to make this marketing effort work? Swagger Factory Apparel, Jackson’s racing apparel company is covering the racing operational costs associated with a primary sponsor’s obligations, as well as a night at the races for Regional Animal Shelter volunteers to visit Fonda Speedway in conjunction with the fundraiser organized by both Spraker and Friers. Every dollar raised during this effort will go straight to Regional Animal Shelter.

On Thursday Board President of the Regional Animal Shelter, Renee Earl recognized this opportunity stating, “We are thrilled to be teaming up with the Shaffer Racing Team this year. It is an honor to be a part of this incredible racing family. This opportunity gives our little shelter added visibility and networking that we wouldn’t have otherwise.”

Shaffer Racing will start their 2019 Racing Schedule at Fonda Speedway in Late April. You can learn more about Regional Animal Shelter, their volunteers, and their efforts by visiting them on Facebook or online at www.RegionalAnimalShelter.org