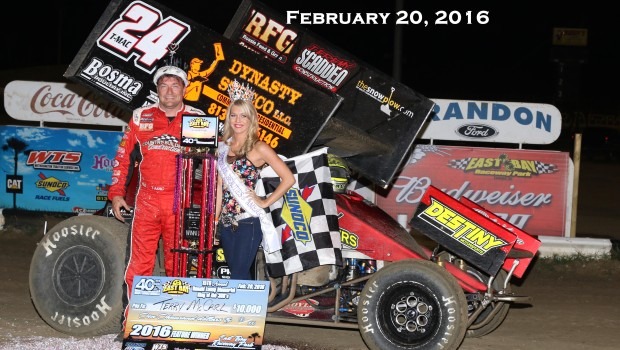 TAMPA, FL – Terry McCarl started 5th and beat some of the best 360 drivers in the nation Saturday at East Bay Raceway Park and claimed the $10,000 prize for winning the 15th Annual Ronald Laney Memorial and wearing the King of the 360’s crown with pride.

He was pumped after finishing a masterful drive that went 40 laps of weaving through heavy traffic to stay ahead of Chad Kemenah who was close on his bumper for most of the race. At the end of the race, he had lapped up to the 10th place car, and Terry complimented track owner Al Varnadore for his track preparation. “When I started 20th on Thursday and finished 6th, then won last night and tonight, I give him a lot of credit for making the track with so many grooves that I could move around when I had to get going.”

The winner told the crowd that today was his Father’s 77th birthday and mentioned that he was not doing well and that the win would surely help. At the same time he invited the crowd to bring their kids down to the pits and have them sit in his race car and he confessed that even some adults came along and they took of the offer and sat in his race car for the first time-ever.

Being quick to credit his sponsors for many years, he mentioned Randy Bernett’s Rock and Landscaping, and Dynasty Stucco, Bosma Poultry, Don Long and his Searsbro Telephone Company, Country Builders and Construction, Rossie Feed and Growers.

When I was just keeping ahead of Kemenah and I could see his nose up close, I counted on my Hoosiers to gain some distance, “They are the best tires in the world, and my Jamie Moyle engine did the job with my A.R.T. chassis.”

At the start of the race, Chad Kemenah started on the pole but it was Danny Martin, Jr. who grabbed the lead for the first three laps before Kemenah took over until it was McCarl’s turn to lead on lap 12. A yellow on lap l7 had the field bunched up tightly with McCarl, Kemenah, Tim Shaffer,Aaron Reutzel, Mark Smith and Phil Gressman in tight formation. It was a close finish the rest of the way with McCarl and Kemenah , with Smith taking third at the end followed by Reutzel, Shaffer, Travis Rilat, Seth Bergman, Jason Sides, Danny Martin, Jr., and Thomas Kennedy. 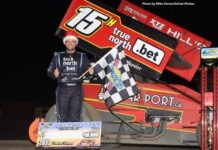 Hafertepe Jr. Crowned As King of The 360’s In Winternationals Finale 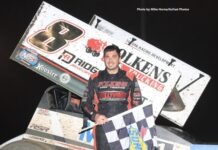