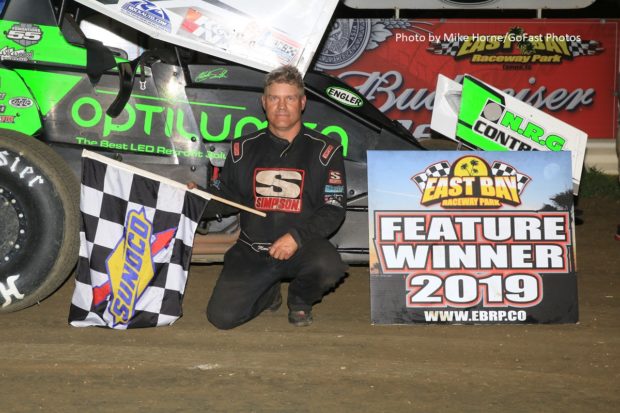 GIBSONTON, FL –  Mark Smith was on the threshold of victory in the opening race, denied by a last lap pass for a win. Whether that turn of events was motivation or the idea that Smith has a fast race car, whatever the circumstance, Smith was not to be denied as he marched through the field to claim the Friday win.

Smith earned the front row after winning his heat race and wasted little time in moving to the lead. Behind him, Tim Shaffer and Travis Rilat sparred for second, which gave Smith the go-ahead to pull away. Smith was running 14-second laps early on, easily catching lap traffic by lap four. The backmarkers were of little concern, staying glued to the bottom while the leader inherited the middle of the track. About the only hope anyone had would come in the form of a caution….that never came.

The 25-lap main ran without a yellow flag thrown, so there was no stoppage. Smith had a half track lead by lap 14 and, when the checkered flag came, there were only six cars on the lead lap in a race that saw very little attrition.

The points for the two nights will be added together with the top six locked in for the Saturday night main.


Robby Hoffmann jumped into a back-up car to win the 25-lap Mini Sprint main. Hoffmann blew the engine of his primary ride during the heat race, but luckily the team had brought along Dirk Miller’s car #68. That would be the mount Hoffmann would use for the feature, but he was relegated to the tail for the start. In short order, Hoffmann found himself poised behind race leader Luke Thomas and set up his challenge. As Hoffmann closed, a car spun in front of the duo. Thomas was able to squeeze by, but Hoffmann made contact and stopped on the track. It meant a return to the back of the field with only 10 laps remaining, but the story remained the same. Hoffmann started picking off cars and moving through the field until he again lined up second. With just a few laps remaining, Hoffmann was able to motor by and grab the lead on lap 22. A final caution ended the race with 23 complete as time ran out.

The 2018 East Bay Raceway Park Micro Sprint track champion Kevin Strife rolled out for his heat race and a broken chain did not allow him to take the green. When the feature rolled around, Strife was at the back, but only for a little while. He soon moved from 11th to second in few laps, jumping into the lead that would never be relinquished for his first victory of the Winternationals.

The 43rd annual Winternationals will conclude with the King of the 360s event on Saturday. Race time is 7 p.m.