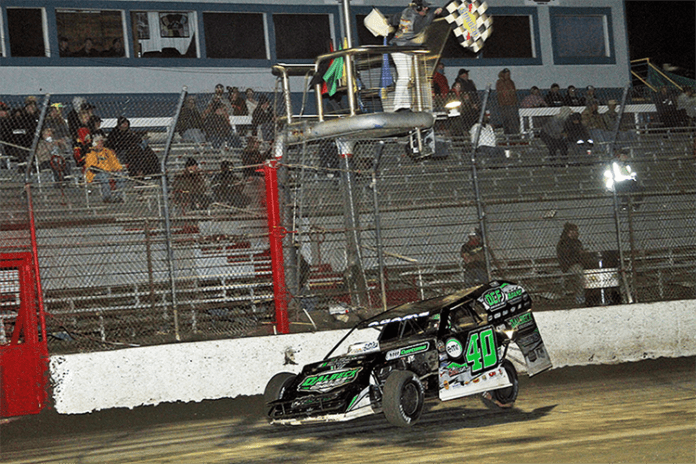 TAMPA, FL – Kevin Buzzy Adams traveled over 1,500 miles to be at East Bay Raceway Park this week. He was going to do everything in his power to bring back at least one Feature win to his native Cameron, WI.

“Anytime you can get a win down here, I don’t care if it’s a Heat Race, a preliminary night or anything, it’s tough to win these races. We’ve been coming here a long time and struggled a lot of years, so we’re happy,” Adams said.

Round 2 of the 2021 DIRTcar UMP Modified Winternationals at East Bay Raceway Park Wednesday night was a great showing for Adams, as he grabbed the lead early on in the 30-lap contest and held off all chargers en route to his sixth career Winternationals victory over Tuesday’s winner Drake Troutman and Chris Wilson.

Adams, who was victorious in last year’s $5,000-to-win Saturday night finale, began his climb to the front from outside the second row after winning his Heat Race earlier in the program. He immediately jumped to the outside groove and picked up two spots on the opening lap before sailing past polesitter Chris Wilson on Lap 2 to take the lead.

Several caution flags early on hindered his ability to open up a substantial gap between he and the field, and from his vantage point, may have even aided in how the track changed over the course of the race.


“We look at a lot of things, from the weather to the tide effect, tire wear… The track changes so fast, especially on yellows. The characteristics change when there’s no movement on it. But that’s what makes it challenging,” Adams said.

Once the race got moving about one-third of the way in, Adams was able to open up an advantage and eventually dive into lapped traffic with it while the rest of the top-five battled it out behind him. Right in the middle of that mix was Tuesday night’s Feature winner, Drake Troutman.

The Pennsylvanian young gun duked it out for the second spot with Wilson and Jason Hughes for several laps, powering around the outside line, much like he did in his Tuesday night win.

“The longer we went, about halfway through, I was going to drop down and try the bottom. When I did, it was real cleaned up. I just couldn’t make up any ground,” Troutman said.

While that line may have worked for him earlier, Troutman did eventually drop to the bottom once again in the final stages and slowly began to reel in leader Adams.

Adams had been diving in low through Turns 1-2 and up high in 3-4 for most of the race, but decided to take it high in Turns 1-2 with two-to-go. This opened up the door for a hard-charging Troutman underneath.

Troutman got a nice run down the backstretch and took a big look to the inside but was unable to make the pass. This really got Adams’ attention.

Now with his heart in his throat, Adams mashed the accelerator as he took the white flag, Troutman still right on him. Fortunately for Adams, two lapped cars sat riding the very bottom as they entered Turn 3. This forced Troutman back up high, where he was left to ride it out to the stripe and see Adams collect the checkers.

“I felt like maybe with another lap, or if those lapped cars weren’t there… but it’s just a part of racing, that’s part of the deal. You’ve got to be able to get around them. I feel like it would have been a really good race if we could have just made something happen there at the end,” Troutman said.

Even though he was unable to pull off another last-lap thriller, Troutman now leads the Winternationals points standings by 25 over Tyler Nicely with his one victory and runner-up finish. This also puts him atop the momentum meter heading into Saturday night’s 75-lap, $5,000-to-win finale with just two nights of action remaining before the big dance.