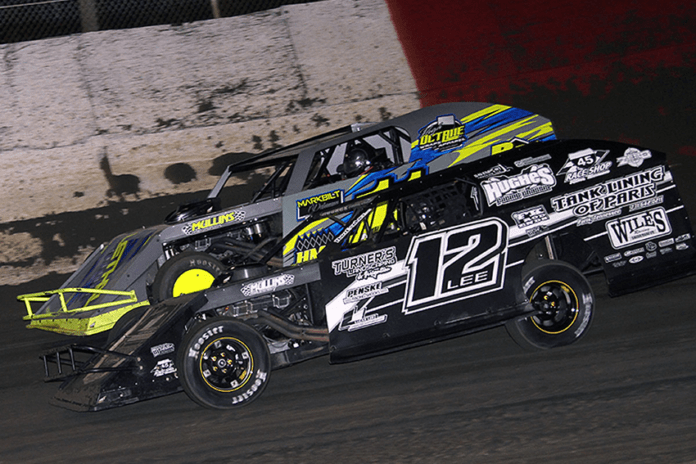 Tuesday night at East Bay Raceway Park did not exactly go as well as the Paris, TN-native had hoped in the series opener, cutting a right-rear tire down while running second. Wednesday night didn’t end any better, blowing a right-front tire while running fourth.

But Lee and his Hughes Racing Chassis were able to put it all together on Thursday night, coming from the fifth spot and holding off teammate Jason Hughes, of Watts, OK, after a great battle in the closing stages to claim the $1,500 prize and his third career East Bay Winternationals triumph.

Spencer Hughes (no relation to Jason) got the jump from the outside pole and led the first three laps, ripping the top side of the third-mile oval, while Lee was forming a run on the bottom. Swiftly maneuvering past Jason Hughes for second, Lee got a big run down the front-stretch and into Turn 1 underneath Spencer Hughes in a bid for the lead and completed the pass as they came out of Turn 4.

Now with the advantage out front, Lee tried to open up a gap on the field but was halted several times over the proceeding 20 laps by caution flags. The longest stretch of green-flag conditions began inside of 15-to-go, where a great battle for the lead made things interesting for the final stanza.

Lee was content running the middle groove for much of the latter half of the 35-lap contest, while Hughes continued to dig on the bottom. After running closely for several laps, Hughes got his best shot at the lead with six-to-go, pulling right up beside Lee as they dove into Turn 1.

“[The bottom was] kinda where I could go with [Lee] in front of me. There wasn’t much room on the outside. So, I just had to dig down there on the bottom and try to make something happen,” Hughes said.

Hughes won the race into Turn 3 and appeared to have sealed the pass until the dreaded caution lights illuminated the speedway as they were coming to the stripe. Because the lap had not been completed when the caution was thrown, Hughes, by rule, was forced to give the spot back to Lee.

“Them cautions usually bite me,” Hughes said. “And not for the good.”

“I was just looking out of the corner of my eye and I saw [Hughes]. I thought I gave it to him there at the end,” Lee said.

Holding on to the revived opportunity, Lee made sure to protect his inside on the restart and drove his #12 the rest of the distance to pick up the win.

“I hate it for [Hughes], because they’ve been busting their tails too. I’m glad it happened for me, but we’re all on the same team so it would have been the same thing if he won too,” Lee said.

Hughes ended up slipping back to fourth after the final restart, but knowing a teammate got the win after a hard start to the week put a smile on his face.

“I think if we hadn’t got that caution, we would’ve had us a good enough car to win. I could’ve made it a little wider running out in the lead instead of second, but with a team car, you’re definitely not gonna get in there and rub on anybody,” Hughes said.

“We wanted to win, but we’re happy to be a be a part of this deal in [Lee] getting a win.”

The DIRTcar UMP Modified action continues Friday night from East Bay Raceway Park with Round 4 of the 2021 Winternationals with the second of two 35-lap, $1,500-to-win Features. Stay tuned to DIRTcar’s social media channels for live updates throughout the event.