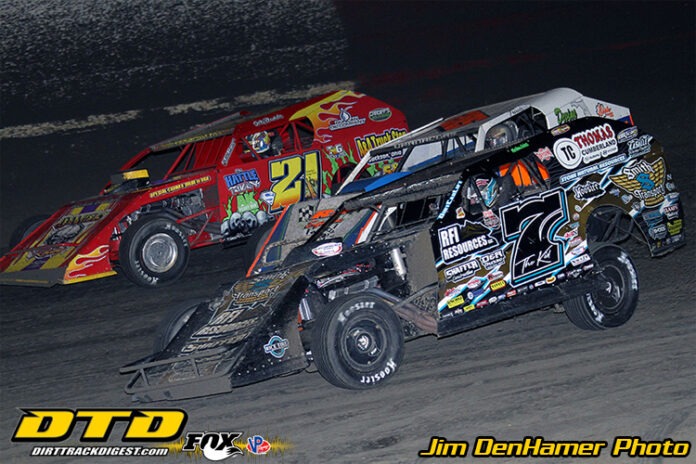 TAMPA, FL – Coming from out of a Last Chance Showdown, Devin Dixon had a chance for the win on the final lap and wanted this one bad. The problem was, so did Drake Troutman.

With a high-acceleration charge out of Turn 2 and a deep dive into Turn 3, Troutman slid up in front of leader Dixon in Turn 4 and flew across the line to steal the DIRTcar UMP Modified Winternationals Round 4 Feature win and make his second trip to East Bay Raceway Park Victory Lane this week.

“Honestly, it’s unreal,” Troutman, of Hyndman, PA, said with a big smile after the race. “We went from not having any national wins with these guys, and now this week we have two. It’s amazing. This Is definitely one to remember.”

Even though he was beaten to the finish line, Dixon, of Apollo Beach, FL, was able to crack a smile after the race, knowing he still finished second after coming from 21st on the starting grid. From his seat, the tacky racing surface just pulled him a little too far into the corner on the final lap.

“Those last three or four laps, I was just trying to hit my marks. I just got in there a little too hot in Turn 1, jumped the cushion, and that gave [Troutman] a little advantage. You know he’s a hell of a wheelman, you can’t take anything away from him,” Dixon said.

When Dixon and the rest of the field took the green, however, the race originally appeared to be in the hands of someone else.

Thursday night winner Lucas Lee took the lead from the outside pole right at the drop of the green and led smoothly, even through the many caution flags in the opening stages. He sustained this lead until reaching the back of a slower lapped car at the tail of the field on Lap 21, when the two came together in Turns 3-4, sending him to the rear after spinning and bringing out the yellow.

This handed the lead over to second-place Nick Allen with Dixon right behind him. On the restart, a battle ensued between the two, which lasted several consecutive laps. Dixon was content to running the cushion while Allen rolled the bottom. Back-and-forth they swapped the lead at the stripe several times before Dixon was able to pull away with only a handful of laps remaining.

“He stayed in his line, I stayed in mine and it was a hell of a race. He’s a hell of a wheelman, too. I’m glad he finished where he did,” Dixon said.

By this time, Troutman was already beginning to gain momentum back in third. He had closed the gap to second-place Allen under eight car lengths with five-to-go and was getting faster every lap.

“I just saw [the flagman] show five-to-go, and I knew I had to go,” Troutman said. “I was going as hard as I possibly could. The car was great.”

When the white flag dropped, Troutman pulled the trigger, shot around Allen for second and drove it hard into Turn 1. Dixon appeared to get into Turn 1 just a tiny bit harder than necessary, which may have given Troutman the single ray of light he needed to make the move.

“Dixon went in there and he got a little bit tight and looked like he sheared it, broke loose up here in [Turns] 1 and 2, and that helped me some,” Troutman said.

Troutman got the holeshot on Dixon out of Turn 2 and beat him to Turn 3, setting up his magical slide job in Turn 4 to take the win.

For having such a fast car, it seemed unlikely to find Dixon’s Lethal Chassis in a Last Chance race to punch his ticket in. This immediately put him behind in the Feature, and by lap 11, he had already cracked the top-five. But despite his great effort to climb all the way up to the top spot, Dixon said the charge may have taxed his equipment too much, too early.

“We just had to start so far back, and when the racetrack’s like that, it’s heavy, pretty hammer down and you’ve gotta use your stuff up early just to get by some guys. Even though we’re points racing, you’ve still gotta be smart and try to get to the front as fast as you can,” Dixon said.

He’s won two Features this week, but neither have been anywhere close to 75 laps in length. However, Troutman’s confident he can contend for the win, so long as he can get the car to come-in again towards the end of the race, just as it’s done nearly every night this week.

“I feel like we definitely have the car to do it because the longer runs, the longer races with this thing this week, we’ve just been great. That seems to be whenever my car comes in. So, we’re gonna roll with what we’ve been doing,” he said.