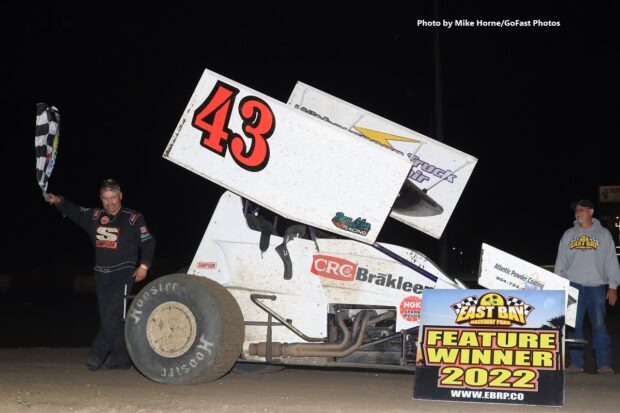 GIBSONTON, FL – A field of 57 360 Sprints gathered on a Thursday night for the opening action of the final series for the b46th annual Winternationals. Pennsylvania’s Mark Smith snatched the race lead on a lap 17 restart, making a return visit to Victory Lane.

There were six heat races with passing points being the determining factor that qualified 16 cars directly into the A main. The remaining drivers would have to perform in one of four B-mains to earn a spot in the 25-lap main.

In the 25-lap feature, Danny Martin Jr. grabbed the early lead as polesitter Sam Hafertepe Jr. slid back outside the top five. Ryan Smith grabbed second, slipping by Martin on lap 3 for the lead. A.J. Maddox was the man on the move, taking second from Martin on lap 5 before grabbing the lead on lap 6. Maddox caught lapped traffic two laps later, but managed to push through and keep a backmarker between himself and his challengers including Mark Smith who had taken over second. The first caution waved on lap 14 for a Johnny Gilbertson spin. Just before the caution, Hafertepe found new life, sweeping from fifth to third in one corner. On the next restart, Smith sought the lead and was ready to make a move before the caution waved. It took a lap 17 restart to spring Smith from second as he swept to the top to rocket by Maddox, bringing Hafertepe along. McCarl had used the highlight to put himself in the mix, but Smith could not be caught.

The Mod Lites gathered for their first night of action for the weekend. Brent Begolo and Austin Martin took heat wins, but it would be Codey Benoit who parked in Victory Lane at the conclusion of the feature. Benoit, who had exited his heat race with suspension damage, picked his way into second by lap 8, trailing leader Josh Sliter when the leader spun in turn two. Though only 8 laps had been completed, the race had hit the time limit, setting up a green-white-checkered finish. No one could deny Benoit his Winternationals win.

The race was red flagged on two occasions. New York racer Kyle Demo flipped on lap one and Bo Bass made contact with a stationary Morghan Johnson on lap two, sending Bass’s car on its roof.

The two divisions will be back in action on Friday with the final night of the Winternationals including the crowning of the King of the 360s. race time is 7 p.m.