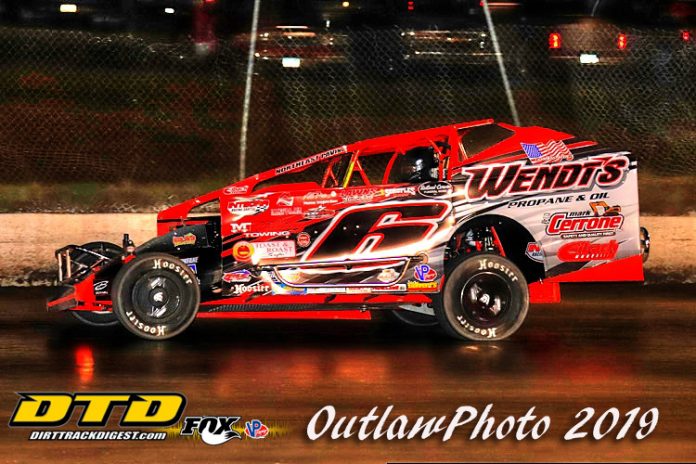 MIDDLETOWN, NY – Mat Williamson’s dream season continued at the Orange County Fair Speedway. He just keeps finding a way to win at the Hard Clay. Williamson was the dominant car in the small-block Modified 100-lap main-event on Friday night while on his way to picking up a $15,000 payday and his 100th career feature victory.

Williamson started from the pole position and briefly gave up the lead to Matt Sheppard after a bobble in traffic. Sheppard eventually bobbled himself handling the lead back to Williamson. He was unimpeded from that point forward other than a few rain drops that slowed the race. Williamson went on to get the job done.

“This is awesome,” commented Williamson. “I can’t thank my guys enough. The super team did it again. They worked hard all day.”

Williamson earned the pole position via the pole-dash earlier in the night with his Bicknell No.6. He took full advantage of that starting spot to beat fellow front row starter Matt Sheppard to the lead heading into turn one.

Williamson’s quick pace allowed him to catch the tail of the 37-car strong starting field by lap eight. Traffic was a challenge as the bottom quickly became the preferred lane on the speedway. With Williamson getting boxed in, Sheppard pulled up to his back bumper.

On lap 12 Sheppard mounted a challenge off of turn four to get under Williamson in traffic to take the lead. Williamson got in line behind him with McCreadie glued to his rear bumper as well.

Like Williamson, Sheppard struggled navigating his way through the slower cars at the back of the pack as the bottom became even more dominant as the laps clicked higher. It ended up being Sheppard’s downfall as he bobbled going into turn one on lap 36 allowing Williamson to get back to the lead.

“I was just worried about protecting the bottom,” said Williamson. “I slipped up with the lapped car and he got by me. Fortunately he did the same thing and I got back by him.”

Now back in control, Williamson charged away from Sheppard as he contended with McCreadie. Sheppard missed his mark again on lap 39 allowing McCreadie to go by him for the runner-up position.

Williamson showed the way at the halfway point before a caution came on lap 52 for Yan Bussiere as he slowed with problems while running in the top 10.

With a clear track in front of him for the restart, Williamson simply checked out. He was far and away the best car in the field at this point as he amassed a full straightaway lead over McCreadie and Sheppard.

Traffic became an issue again on lap 65. Like earlier in the race, it was a difficult task for Williamson, but he was up to the challenge. Williamson was very good coming off the turns which helped him put several cars between himself and the race for second.

Williamson led with Sheppard hounding McCreadie for second. McCreadie tried to go around a slower car on the outside. Sheppard dove underneath both of them to take back the runner-up position back on lap 79.

The race was put on hold on lap 91 as weather became an issue. Drivers were briefly brought to pit road before race resumed. The green lights came back on for three more laps before Gary Edwards Jr., spun on the frontstretch. Under yellow the rain intensified again causing another delay in the program.

“I was just worried after what happened at the Centennial,” mentioned Williamson about the delay. “I didn’t want that to happen again. (Brett) Deyo made the right calls. We probably could have stayed out there and did the same thing, but here we are.”

After a 10-minute delay, the race got going once more with Williamson resuming his dominance of the field. He charged away from the field at the green and was never deterred to take home the win.

Sheppard drove the Slack Racing Bicknell to a second-place run. Sheppard was pleased with the effort after coming up just short. He wasn’t going to be able to run the race until the Slack family stepped up to give him a ride in their car.

“I was pretty content where I was,” cited Sheppard. “I didn’t have enough for the six car (Williamson). I don’t think anybody did. I can’t thank the Slack family enough for dragging this car down from Canada for me to drive tonight. If it wasn’t for them I’d probably be watching this race.”

Brett Hearn took advantage of the final restart to get by McCreadie to score the final spot on the podium. The outside was good for restarts and Hearn used it to his advantage to get up to third at the checkered.

“It was a matter of the tires being cool with the yellows,” stated Hearn. “It seemed like for a lap or two you could go up there and get some momentum, then you had to get back to the bottom again. Timmy and I swapped the spot back and forth a little bit.  Luckily the rain stopped long enough for me to make that high-side run.”

McCreadie settled for fourth with Billy Decker completing the top five in the running order at the checkered flag. 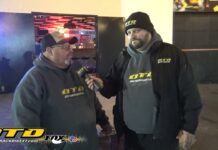