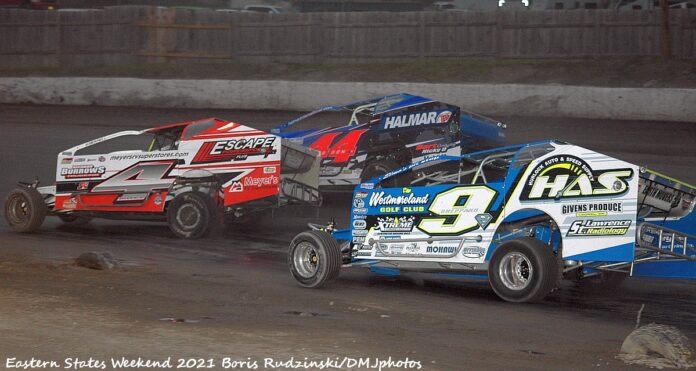 MIDDLETOWN, NY – It was one for the ages.

“That was unreal,” said Sheppard.  “I hope the fans got their money’s worth tonight.  What a slugfest.  You know, there were so many points in the race where I thought we had the car to beat and he’d (Friesen) drive back by me and drive away.  I’d think I didn’t have anything for him.  I’d pull the rabbit out of the hat and sneak back by him, then he’d sneak back by me again.

“Everything just worked out.  We got out front, got some good restarts at the end, found a good lane on the bottom, got through the lapped traffic clean and everything went out way.  That’s what it takes to win this race.  I’m just excited.  This race has been a thorn in my side for a long time.”

Friesen fired from the pole position with Sheppard going off from the eighth starting spot.  He was quickly into the top give before moving into second on lap 15.  A lap later he took the lead the first time.

Sheppard was out front when the first caution came out on lap 27 when Kenny Tremont went up in smoke.

The race went back green on lap 32 with Friesen rolling through the middle of turns one and two to put his Halmar No. 44 back at the front.  Sheppard stayed with him.

Friesen caught traffic on lap 40 which allowed Sheppard to close to his back bumper.  They remained stuck together for the next several laps including a side-by-side battle for the top spot on lap 45.

Sheppard drove around him on lap 46 before Friesen regained the lead on lap 48.  That’s the way they’d stay as they battled in heavy traffic for the next several laps.

Sheppard took back the lead on lap 62 and Friesen returned the favor a lap later before Sheppard went around him again on lap 65 off of turn two.

It was Sheppard on the point until Friesen found the middle groove again in turns one and two in traffic.  He drove by Sheppard down the backstretch to take over the lead.  A lap later, the caution came out for Sam Martz as he got into the wall in turn three on lap 81.

Under the caution Friesen, Sheppard and most of the front half of the field elected to come down pit road for their one and only pit stops.  Tim Fuller remained on track and inherited the lead with Peter Britten in line behind him.

Fuller kept himself on the point with Friesen restarting in the eighth position.  Over the course of the next few laps a few cautions and restarts later allowed Friesen was able to move his way back into second by lap 95.

The race went back to green on lap 99 which allowed Friesen to race around Fuller for the lead just before the halfway stoppage.

After pit stops concluded, Friesen looked next to him and saw Sheppard there with him one more time on the front row for the second half of the race.

Friesen was strong during the opening laps of the second half of the race keeping Sheppard behind him.  The top two remained unchanged when caution was necessary on lap 126 for a slowing Tyler Boniface.

A few cautions later Sheppard got another crack at Friesen.  He was able to get close, but he just couldn’t make the move to get by him.

Friesen changed his lane as the top of the speedway as it seemed to be coming around.  That lane changed allowed Sheppard to pull in and make a move for the lead on lap 148.

Friesen worked hard to get back to Sheppard, which he did on lap 155.  He drove by Sheppard in traffic to take over the top spot once again.  At that point C.G. Morey slowed with a flat tire to bring out yellow.

The race went green then quickly red as Bob McGannon and Sean Beardsley got together in turn two on lap 161.  Beardsley got over in the second turn and was uninjured in the incident.

Friesen fired first for the restart, but it was Sheppard who’d take the lead in turns three and four.  Sheppard rolled the high-line to regain the top position.

“He chose the bottom and you could roll the top for about a lap there,” stated Sheppard.  “I was just able to clear him on the outside and tuck back down to the bottom.  From there it was a cat and mouse game there in lapped traffic.”

Sheppard kept his No. 9s Bicknell at the front from that point forward.  He found his way into lapped traffic with only a handful of laps left.  They were kind to Sheppard allowing him to drive by to take the checkers.

Friesen was forced to settle for a runner-up finish in the 200.

“It was fun,” mentioned Friesen.  “Being on the losing end of it kind of stinks, but it was definitely a fun battle all race long.”

Defending race winner Mat Williamson came from 27th to finish in the third spot.  He was consistent all day long allowing him to finish in the final podium finish after a tough start to the weekend that saw him destroy a car on Friday night.

“We just persevered,” said Williamson.  “We got some good restarts.  We just worked our way to our way to the front slowly and here we are.”

Anthony Perrego ended up in fourth with Peter Britten coming back to finish in the fifth spot.