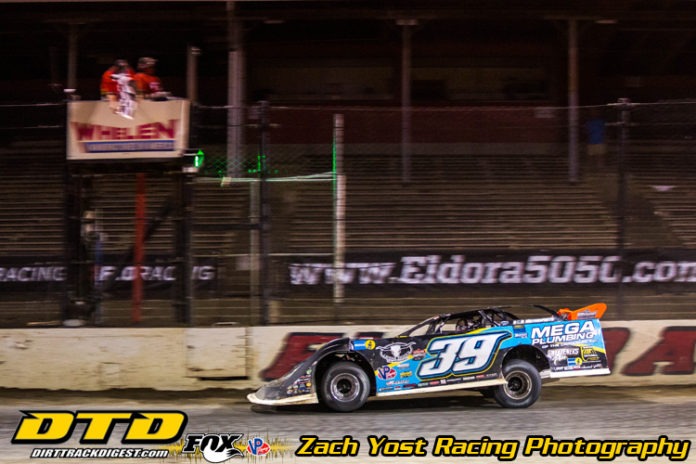 ROSSBURG, OH– For Eldora Speedway’s 67th birthdate, it was only fitting the DIRTcar Late Models put on an absolute thriller in the closing laps. In the end, it took a green-white-checkered finish to decide a winner in the Dirt Late Model Stream Invitational.

Tim McCreadie pinned the throttle off of Turn 4 and led the mad scramble for $50,000 down into Turn 1 with fellow Eldora Late Model crown jewel winners Brandon Sheppard, Jonathan Davenport and Bobby Pierce right on his tail. After spending most of the race on the bottom, McCreadie let his Paylor Motorsports #39 drift up to the top side of the track to block any pass attempt from that lane behind him, not knowing if it would work.

But it did. T-Mac powered down the backstretch and left his competition in the dust to win the inaugural running of the vacant-grandstands event and his first marquee Late Model event at The Big E since the 2018 World 100.

“We have two cars that are great, so it’s pretty amazing we’re here, that’s for sure,” McCreadie told pit reporter Ben Shelton in Victory Lane.

McCreadie’s preliminary Feature efforts on Thursday and Friday night did not turn out exactly as he planned, with finishes of 14th and 19th, citing internal mechanical issues as a culprit. But that only made the turnaround that much more impressive.

“We struggled all weekend kinda, when it slowed down, I’ve been complaining about no grip in the right rear,” McCreadie said. “We broke a motor in the other car the other night.”

He and his crew rolled out the other Bilstein Shocks car after the Feature Friday night and immediately got to work, prepping the backup car for the task ahead of them. Right from the drop of the green flag in the Feature, McCreadie went to work on the 25-car field.

Originally, McCreadie was scheduled to start from 13th after grabbing the final transfer spot in his Heat. But the entire inside row was moved up just before taking the green, as polesitter Chris Madden was unable to fire due to a failed ignition box. This put McCreadie 11th on the grid as Sheppard inherited the pole and took off like the Rocket Chassis underneath him.

Sheppard took to the high side and led for the first 17 laps of the race with Davenport chasing him down. Superman got his first crack at the leader when a caution was thrown for Thursday night’s winner Kyle Strickler, which put him to the outside of Sheppard for the restart.

Davenport got a big run on the top side as Sheppard crossed him over down the backstretch, prompting a big slide job from Davenport in return to take the lead out of Turn 4. Davenport held his #49 in the lead on the top side through Lap 35, when Sheppard returned the favor to his outside after another restart.

Meanwhile, Pierce had made his way to the front very quickly from his 15th starting spot, riding his signature high line and abusing his right-side quarter-panel as he reached the top-five by Lap 22. He and Sheppard chased leader Davenport around the half-mile until both getting by him after the Lap 36 restart.

Pierce chased leader Sheppard around on the extreme high side for the next 25+ laps, both cars banging off the outside wall. But into the frame stepped McCreadie with just seven laps remaining, who had quietly been picking cars off on the bottom and gaining on the leaders since the previous restart.

McCreadie was getting a great bite on the bottom and stayed smooth as he made the pass on Pierce for second with five laps to go. As he was reeling in leader Sheppard, a lapped car broke Sheppard’s momentum up top. This opened the door for McCreadie down low, which he quickly slipped through with just two laps to go.

McCreadie was pulling away when the final caution was displayed just after taking the white flag. He made the risky decision to slide up top from the bottom on the restart, and he executed it perfectly to defend the lead and score the win and his second big check at Eldora.

“I just figured you’ve got two of the best behind you on the cushion, and the last thing I wanted to do was get beat because I didn’t at least try to go up there,” McCreadie said. “I know I didn’t get all the way in the cushion, but I figured if I drove in hard enough and kept my speed up, they wouldn’t be able to get that huge run off the corner because I was in their way.”

“I just figured, ‘well, if he’s under me, I can see him, and then I can knock the deck out on the last lap if I gotta try and do something,’” McCreadie continued. “I never seen ‘em off of Turn 2, so I did my normal line through Turns 3 and 4. In 1 and 2, I just tried to carry speed.”

Pierce made the mad scramble for the top line on the final restart work to his advantage, as he was able to hold off the hounds behind him for a runner-up finish with almost no right-rear quarter-panel remaining.

“Any little chance I had, I had to take it because the track started taking rubber there at the end,” Pierce said. “All in all, the racetrack was really good. To provide racing like that, there’s nothing like Eldora Speedway, that’s why I love coming here.”

After a third-place run Friday night, Dale McDowell was able to sneak by on the low side for another third-place finish on the final restart.

“We re-fired on one of those restarts and drove up through there, and then it was like having a flat and I had a little tire shake,” McDowell said. “So, I don’t know what went on. And then it kind of laid off; it came and went. The last restart, I was just a little patient and those guys were hustling pretty good. So, I was able to get me a few spots.”