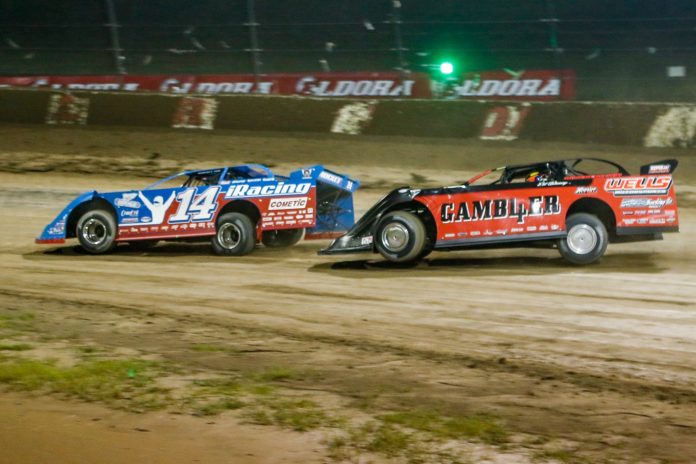 ROSSBURG, OH – If opportunity arises, you strike. Josh Richards did just that on Thursday night at Eldora Speedway.

With polesitter Josh Rice of Verona, Ky. succumbing to a heart shattering lap one DNF, Richards of Shinnston, W.V. assumed the point and never looked back. Commanding all 30 laps of the Intercontinental Classic opener, the 32-year old driver banked $10,000 for his triumph aboard the Clint Bowyer Racing, iRacing.com, Dekalb No. 14 Rocket/Cornett.

For Richards, who now resides less than 20 minutes away from the Rossburg, Ohio half-mile, it was his third career preliminary feature win at “The Big E” – joining previous prelim victories from the 2013 Dirt Late Model Dream and 2018 World 100. A fulfilling return to any victory lane for that matter, Thursday marked the third win of his season and first since July for the four-time World of Outlaws Morton Buildings Late Model Series champion.

“I know there’s no points on the line, but we really want to win at Eldora,” said Richards, who has yet to bask in the glory of a Crown Jewel Championship at Eldora. “We’ve been so close. To be back up here, even though it’s a preliminary win, there’s still 48 awesome cars here and it’s all of the best drivers in the country. Being on this stage means a lot for me.”

Moving up to the pole position following Rice’s unfortunate trouble, Richards outgunned Ricky Weiss of Headingley, Man. into turn one and set sail on the field. Mastering the first restart of the race on lap 14 – following a Zack Mitchell caution – Richards ran off into the Rossburg night while Brandon Overton of Evans, Ga. went to the second spot and set his sights on the Clint Bowyer Racing No. 14.

Held up by a trio of stoppages past the halfway mark, Richards time-and-time again went with the outside lane for double-file restarts, sticking Overton down low on an already narrow track. Surviving each attempt “Big Sexy” threw at him for the lead, Richards was able to turn away every deep dive into turn one and easily control his pace once establishing a green flag run.

A lap 21 caution for Kyle Bronson set the stage for the final restart with nine laps to go, but Josh Richards was simply not to be denied on this Thursday night. He fired off and yanked Overton off the start, running away to the checkered flag with a 1.420-second advantage at the stripe.

“I was just taking it one lap at a time out there; I felt really relaxed tonight,” noted Richards on his feel for the car. “I’ve never doubted my abilities when we come to Eldora, and especially this year with how we’ve been consistently fast. It’s just a matter of putting all the right pieces into the perfect package. I knew clean air and restarts would be big tonight. My biggest concern was with Overton being down low, I knew he would fire off well and charge me into turn one, but this thing was great and we took care of business.”

Settling for a runner-up bid in the feature, Overton still left Eldora as the top dog in one way on Thursday night. Collecting 741 points from his second-place qualifying time [45 pts], heat race win [200 pts], and second-place feature finish [496 pts], “Big Sexy” topped Richards by two markers to leave as high point man after one night. It was a near perfect start to the weekend for Overton, who dons a special throwback scheme to “The Gambler” Ed Basey on his Wells Motorsports No. 76 Longhorn/Clements.

“This track was so demanding tonight and it was hard on equipment, but we got our points and survived,” Overton thought afterwards. “I almost had Josh on one of those restarts, but he pinched me off just enough to hold on. I knew I needed to be smart with two more nights left, so it wasn’t worth risking anything. He could just zing the top so well, I was too tight for that. I tried to get up there and almost junked it a few times, after that I went back down.”

Rounding out the podium with a third-place finish and ending up third in #EldoraClassic points was Canada’s own Ricky Weiss. A sixth-place finisher in June’s Dirt Late Model Stream, Weiss and his Drydene Performance Products No. 7 Team Zero/Vic Hill continued their stellar run of late at the Ohio half-mile.

“There was a lot of hard racing out there tonight,” Weiss stated in post-race tech. “We had a great qualifying run, another great heat race, and followed that up with a consistent feature. I can’t thank Vic Hill enough for putting this new motor in earlier this week. Hopefully we can get up there where Josh is at, that’s what we want.”

June’s Dirt Late Model Stream Champion, Tim McCreadie, finished fourth aboard his No. 39 Longhorn with Kevin Rumley at the wrenches. Chase Junghans, a 26-time top ten finisher with the World of Outlaws this year, made his way to the fifth spot with a charge from 11th in his Shop Quik No. 18 Rocket. Closing out the top ten in Thursday’s preliminary feature was Iowa’s Chad Simpson in sixth, Brandon Sheppard in seventh-from-18th aboard the Rocket1 Racing ride, Eldora achiever Shane Clanton in eighth-from-15th, Spencer Hughes with an impressive ninth-place outing, and Chris Madden in tenth with the Rum Runner No. 44.

Still without any fans in attendance due to the COVID-19 pandemic, the eeriness and emptiness of “The Big E” was felt and seen all night long. Particularly from Richards, who climbed up top for a roof stand with no roaring cheers or boos from the masses at Eldora to greet him.

“It’s so different,” Richards thought on the environment. “We’ve got the best fans in the whole world and all we want is for them to be here with us. We want to put on a show for them, that’s what this is all about. I hope everyone tuned in at home is enjoying this deal. We can’t wait to have you back with us.”

The Intercontinental Classic at Eldora Speedway rolls on with another preliminary show on deck on Friday night. Qualifying, Heat Races, B-Mains, and a 30-lap, $10,000-to-win feature will again await the DIRTcar Late Models. The 48-car field continues to fight for crucial points, which will set the stage for Saturday’s heat races and lead into the 67-lap, $50,000-to-win feature on Saturday night.