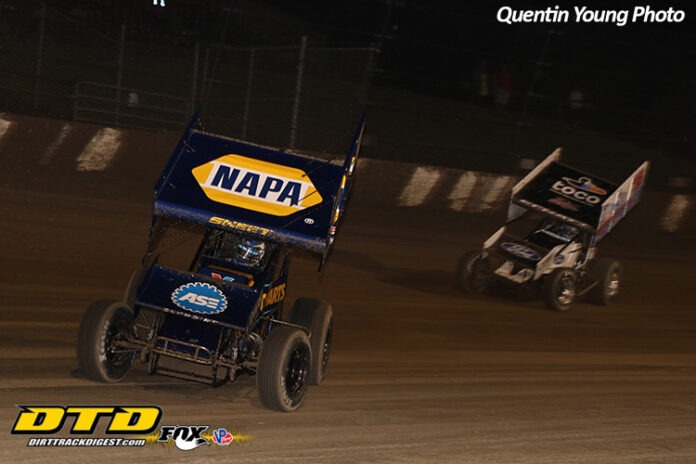 ROSSBURG, OH – In one of the most-anticipated announcements in its 68-year history, Eldora Speedway officials today revealed the 2021 schedule of events, and – most importantly – the return of fans to the grandstands for the first-time in 20 months.

The 24-night slate kicks off May 7 and 8 with the #LetsRaceTwo Doubleheader Weekend showcasing both the World of Outlaws NOS Energy Drink Sprint Cars and the USAC AMSOIL National Sprints Cars.

Fans may think they are seeing double for much of the season as Eldora confirmed three of its marquee event weeks will feature first the event originally planned for 2021 and then the event rescheduled from 2020.

The first week after Labor Day sees Dirt Late Model drivers and fans make an annual pilgrimage to Ohio, and for that week Eldora becomes home. The site of the sport’s most-coveted triumph, the year 2021 offers an opportunity unlike any other with two opportunities at victory.

The first comes Thursday, September 8, when the 51st World 100 offers up a rare chance at the famed globe trophy, $54,000-to-win, and a historic marker place in the record books.

Already revered for its electrifying atmosphere, the excitement at Eldora during World 100 week is sure to be at a feverish pitch, as fans and drivers alike turn their attention to Saturday night. It’s the golden anniversary of The Biggest Dirt Race in The World™, the night they will have been anticipating for 736 days, and on Saturday, September 11 it will finally take place – the 50th World 100.

In addition to the marquee events, the 2021 season is dotted with a collection of new and fan favorite events.

The Superstar Racing Experience (SRX) on Saturday, June 26, a throwback to the International Race of Champions, showcases 12 world-class racers from wide-ranging backgrounds competing in identically prepared stock cars overseen by legendary crew chief, Ray Evernham. The event will be broadcast live on CBS.

Local DIRTcar Late Model drivers, UMP Modifieds and Eldora Stocks will again be showcased on the Sunday night of Memorial Day Weekend in the Johnny Appleseed Classic presented by Miller Lite and the Sunday night of Labor Day Weekend in the 13th Baltes Classic by Coors Light. The three divisions will first take to Eldora’s high-banks on Saturday, May 15 in the “$5,000-to-win Lidlifter.”

The two $10 Family FIREWORKS Nights by Casey’s General Stores return to their traditional May and August weekends. In addition to the UMP Modifieds and Eldora Stocks, the K&L Ready Mix NRA 360 Sprints will join the card on Saturday, May 22. A new special national event for compact cars, sanctioned by the Vores Compact Touring Series, will be part of the Saturday, August 7 show.

Eldora’s season will conclude on September 24 and 25 with the 39th running of the 4-Crown Nationals Weekend. Friday night’s ‘BeFour The Crowns Showdown’ will include full racing programs for the World of Outlaws and USAC NOS Energy Drink Midget Championship plus qualifying for the USAC Silver Crown Series. As is tradition, Saturday’s ‘4-Crown Nationals’ will feature full-programs for the USAC National Midget, National Sprint Car, and Silver Crown divisions plus the FloRacing All Star Circuit of Champions Sprint Cars.

Eldora’s broadcast partners for the 2021 season include FloRacing, DIRTVision, and CBS. The 2021 schedule is posted in its entirety at www.EldoraSpeedway.com

TICKETING & CAMPING UPDATE:
The State of Ohio and Ohio Department of Health’s (ODH) issued an amended and simplified order last week. It included welcome new ‘’common sense” guidance for outdoor events and large gatherings: practice social distancing at the event; wear a mask when not in your seat or at your campsite; wear a mask when you’re in a building or can’t social distance; limit your interaction with people you don’t know; and urged getting vaccinated against COVID-19 (if you choose).

Applying the parameters of the amended guidance to the entirety of Eldora’s current reserved seating, general admission areas, and grass hillsides, Eldora officials believe they can achieve a capacity close to 30% for the May events on a reserved seat basis.

Governor DeWine has committed to lift all statewide health orders when/if the state’s number of COVID-19 cases drops to 50 per 100,000 (over a two-week period). The Eldora team joins our fans and racers in doing everything we can to get back to 100% capacity as soon as possible.

About Eldora Speedway:
Since carved from a cornfield in the natural amphitheater that existed between the Eldora Ballroom and the Wabash River by bandleader Earl Baltes in 1954, Eldora Speedway has grown to be a frontrunner in motorsports growth and stability. Baltes chose to sell the legendary high-banked clay oval to motorsports entrepreneur and NASCAR, IndyCar and USAC champion Tony Stewart in 2004. Eldora celebrates its 68th season of racing in 2021. Information on Eldora’s 2021 calendar, including ticket and campsite information is available at www.EldoraSpeedway.com. Fans can get behind-the-scenes access by following @EldoraSpeedway on social channels Twitter, Facebook, Instagram and Snapchat. Exclusive video content posted on www.youtube.com/EldoraSpeedway has over seven million views. Eldora’s official livestream video partner is FloRacing. You can watch nearly every event from Eldora on your favorite screen at FloRacing.com or via the FloSports app.