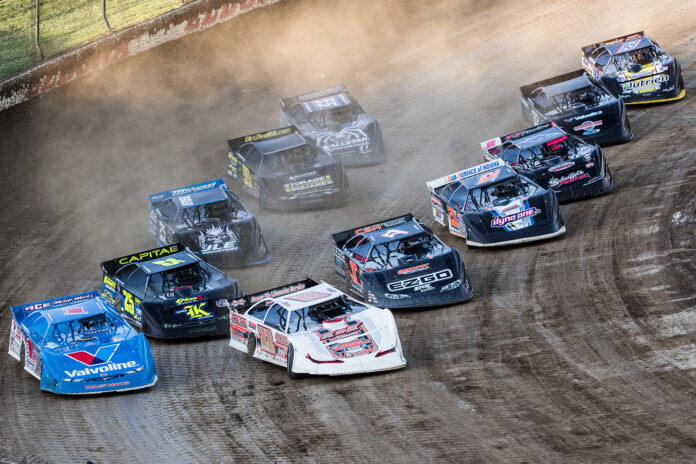 The 26th & 27th running of the Dirt Late Model Dream hits Eldora Speedway in just under two weeks’ time – Wed-Sat, June 9-12. The 26th (2020) Dream, postponed to 2021 due to health restrictions from the pandemic last June, will be run Friday and Saturday night after the 27th (2021) Dream, contested on Wednesday and Thursday.

With the addition of the fourth day to this year’s mega version of the famed event, the stakes and the pressure on the drivers and crews will also get a boost. Defending Dream champion Brandon Sheppard, of New Berlin, IL, and the Rocket1 Racing crew will return to the half-mile this year in search of their second Dream title, and have stuck to their guns in dealing with defending the many titles they’ve garnered over the past decade.

“It’s why we’re here night-in and night-out, to try and win,” Sheppard said. “If you let the pressure get to you there, you’re just going to fold, so you’ve just gotta let it be another race and try to win.”

A fourth night of competition also means another night of wear-and-tear on equipment. 2016 World 100 winner Bobby Pierce has taken on some new additions to his crew this year but is confident in their abilities as a team to keep the car in shape.

“I know I’m going to be prepared for it,” Pierce said. “You’ve just got to keep up with your equipment. Every day you’re racing, it’s going to be hard, just making sure everything’s top-notch.”

Being that the event concludes just four days before the start of the 2021 DIRTcar Summer Nationals Late Model tour, of which Pierce is a three-time champion, the double Dream will likely be a test to see how well prepared he and his new team are to tackle a busy summer.

“It’s kind of a deal like Summer Nationals. You’re racing every single day it seems like, and you might get behind on checking stuff. Really, your crew help’s gotta be good on those long stretches,” he said.

For the first time in over a year, Eldora is welcoming spectators back into the grandstands for its annual racing spectacles. Pierce, the 24-year-old from Oakwood, IL, first captured the eyes of the larger motorsports world at Eldora with his runner-up finish in the 2015 Dirt Derby with the NASCAR Truck Series, and has held their attention ever since.

Historically speaking, the three-time DIRTcar Late Model national champion has always been a head-turner when it comes to he and The Big E. His flashy, special car designs that only come out for his appearances at Eldora always coincide with a new t-shirt design, which will surely be a high seller on merchandise row now that the fans are back in the seats.

“So many people go to the Dream and the World [100] and some of those big races, but especially at Eldora. Heck, there’s people that only go to one race a year and go to Eldora. For sure, we missed out on some opportunities there [last year], so it’s gonna be nice getting the fans back and just getting that energy back at the whole racetrack,” Pierce said.

Sheppard echoes the same sentiment, as it just wouldn’t be the same for him to attempt a Dream repeat without a packed house to witness the action.

Despite all of the anticipation and excitement lost in last year’s Dream (and World 100) postponements, the Eldora Speedway staff is following through on their commitment to provide great racing entertainment to its fans and an opportunity for its drivers to capture some big winnings by running two of its biggest Late Model events in back-to-back editions. Needless to say, the drivers and teams are thankful.

“Eldora’s really sticking their neck out for us in doing that and allowing us to be able to race for that much money,” Sheppard said. “It’s really cool of them to do that.”

Don’t miss the 26th and 27th runnings of the Dirt Late Model Dream in double back-to-back nights – June 9-12 at Eldora Speedway. Find live coverage and updates throughout the week on all of DIRTcar’s social media channels, as well as DIRTcar.com.