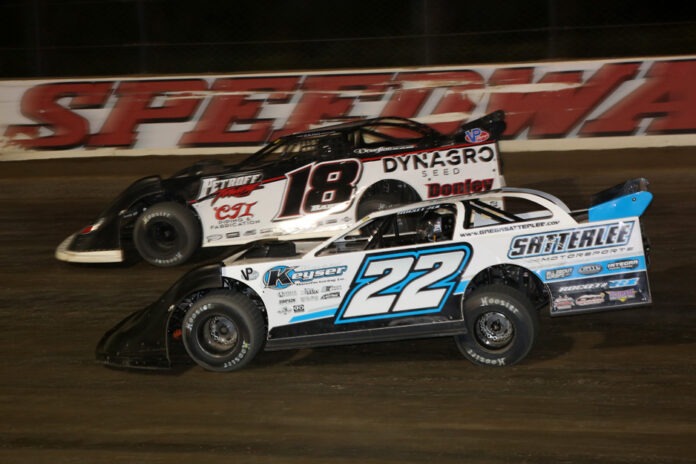 ROSSBURG, OH – The stars always find a way to shine in the big moments at Eldora Speedway. Brandon Overton and Gregg Satterlee found some star power of their own on Friday night and traded it in for two $10,000 checks in the preliminary night of action at the 26th Dirt Late Model Dream.

Unlike the previous two nights of action in the 27th Dream, the rain stayed away completely and helped the track crew to present the drivers with a smooth, slicker surface to race on. This played right into the hands of Overton and Satterlee, as they took advantage of its multi-lane characteristics and made passing for the lead look easy on their way to Victory Lane.

A zero was spun on the Wheel of Misfortune after both Features had concluded, which means there will be no inversion of any Heat Race starters for Saturday’s $126,000-to-win finale.

He’s now won a total of $147,000 in just three nights at Eldora. Not too shabby for the newly crowned 27th Dream champion, Brandon Overton.


The Evans, GA-driver made quick work of his competition in Friday’s Feature, compared to the lap-after-lap fight for the lead he had with Stormy Scott just two nights prior. Overton stared fourth on the grid and was up to second by Lap 3, putting 2003 Dream winner Darrell Lanigan in his rearview with a move to the inside heading into Turn 3.

Polesitter Ryan Gustin, of Marshalltown, IA, had jumped out to a sizable lead in clean air, but it didn’t last long. Overton was dangerously fast down low as Gustin clung to the high line, which ended up hurting him in the end as he slightly jumped the cushion in turn 4, swinging the door wide open for a lurking Overton down low.

Now in the lead as he crossed the stripe to complete Lap 9, Overton’s mission was to run away and hide. Which, he did, leading the remaining 17 laps to score his sixth career Eldora Feature victory and third in three days.

“This thing – I feel like anybody can get in it and drive it. It feels really good,” Overton said of his car in Victory Lane.

Gustin was able to hold on for a runner-up finish, nearly four seconds behind Overton at race’s end. He had only one explanation for how Overton got around him when all was said and done.

“Overton’s just fast. That’s all there is to it,” he said.

While he’d come close several times on some of the biggest stages, Gregg Satterlee had never won a Feature of any kind at Eldora Speedway. Until Friday night.

The Indiana, PA-driver capitalized on a mistake by polesitter Shannon Babb after a late restart to make the pass which led him to the $10,000 victory and those ultra-important Every Lap Matters points to get him in a good Heat Race starting spot on Saturday.

Babb, of Moweaqua, IL, crept out to a nice lead in traffic while Satterlee chased him down as they got down under 10-to-go. But a caution flag was displayed on Lap 18, which restacked the field and led to a restart which Babb would love to take back.

“I knew on that start that I had to get in the lead, and into Turn 1 I ran a little bit hard. [Satterlee] stayed with me at the flag stand, and I got in a little hard and kinda overshot Turn 2. I got a little push and got the angle wrong, and Gregg was able to take advantage of that,” Babb said.

Indeed, Satterlee walked through the open door that Babb left him down low, dove hard into Turn 3 and slid up in front of him to take the lead away out of Turn 4. From there, it was nothing but The Truth out front to the checkers.

“I saw it happening and I was able to adjust and get back underneath [Babb] and get a run on him,” Satterlee said of the pass for the lead.

While he was closing in on Babb before the yellow was displayed, Satterlee said the restacking of the field was actually something he needed.

“The lapped cars were kinda everywhere, the track was really dirty and dusty, so it was just able to get me reset and get back get back in clean racetrack,” Satterlee said. “Had [the caution] not come out, I don’t know that I would have passed him, but I was right there with him.”

The 26th Dirt Late Model Dream comes to an epic conclusion Saturday night at Eldora Speedway with the 100-lap, $126,000-to-win Feature event to cap off a night of Heat racing, B-Features and B-Scrambles. Hot Laps are scheduled for 6:30pm – follow DIRTcar Racing on Twitter, Facebook and Instagram for all the updates.