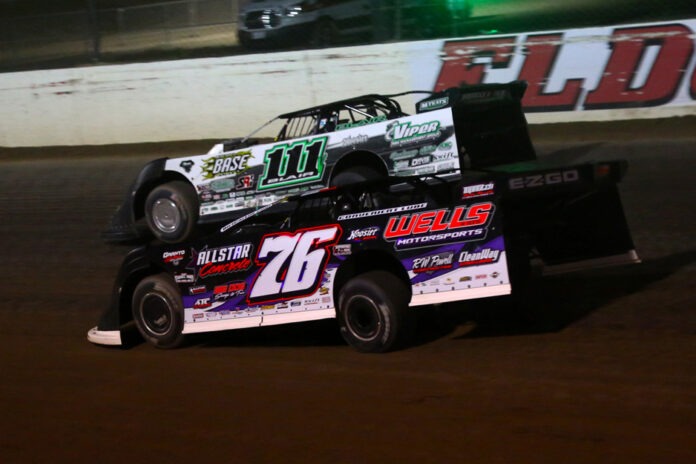 ROSSBURG, OH – When it comes to crown jewel Late Model events at Eldora Speedway, starting up front, making smart moves in traffic and getting the jump on starts each seem to play a big role in a driver’s path to Victory Lane.

Brandon Overton and Gregg Satterlee showed mastery of all three of those Friday night, winning their respective preliminary Features in the 50th edition of the World 100 – just as they both did on Friday night of the double Dirt Late Model Dreams back in June.

A grand total of 79 DIRTcar Late Models signed-in for competition in the gold anniversary of dirt track racing’s most prestigious event. After 50 total laps of Feature racing between the two split groups, a #4 was spun on the Wheel of Misfortune, indicating the top-four cars in Saturday’s Heat Race lineups will now be inverted before hitting the track.

He just keeps winning and winning at The Big E. With yet another victory Friday night, Brandon Overton has now won in six of the last seven Features he’s started at Eldora.

Overton led all 25 laps virtually unchallenged for the $10,000 prelim Feature win. But his journey to get there was a little different than in times past. He struggled in Qualifying, posting only a 20th-fastest time in the group, which set him fifth on the grid for his Heat Race.

However, Big Sexy made it back up to second by the end of his Heat, placing him on the pole for the Group A Feature. According to the event format, the top-two finishers from each Heat were locked into the Feature and given their fastest Qualifying lap back. The two fastest of the four third-place finishers were also locked in and given their Qualifying times back as well. The 10 total drivers were then lined up slowest-to-fastest by those times, which placed Overton on the pole.

Eldora crown jewel event formats always give drivers a challenge, but Overton approaches them all the same. Sit down, strap in and go fast. And win.

“They keep asking me what is it, or how… and honestly, I don’t know either,” Overton said with a smile. “Everything’s been going our way. We keep making mistakes early and it’s almost like we’re capitalizing on them with however they do that invert.”

His Wells Motorsports #76 was as smooth as glass around the half-mile, as he cruised untouched to the win. In traffic, he made smart, patient moves to avoid giving getting held-up and opening the door for runner-up Jimmy Owens to swoop in for the spot.

“When it’s out front, it’ll drive itself,” Overton said. “I just gotta get in there and steer it and aim it wherever I want it to go, get my arcs right getting in. It’s awesome.”

Now with three races down on the week and one final show left on Saturday, Overton and his team prepare for a chance at Late Model immortality. They’ll attempt to do the unthinkable, winning two Dreams and two World 100s in the same year. Right now, Overton’s got all the confidence in the world in his skills and all the faith he needs in his team.

“It makes me feel good to be able to make it go that fast,” Overton said. “There’s a lot of smart people in these pits. So, for us to do this and have that car that fast and consistent, at this big of a race, it makes me proud of my team and everything we’ve got right here.”

It’s never easy to hold off an entire field of cars in a sprint race at Eldora, especially with the youngest World 100 winner, Bobby Pierce, right in the rearview. But Gregg Satterlee did just that Friday night, earning his first career World 100 preliminary Feature victory from the pole.

“I was just making as smooth of laps as I could, keeping my speed up, trying to not commit myself to one line, but trying to use the middle groove to the bottom and ride it out until the end or Bobby got by me,” Satterlee said.

Satterlee indicated he never considered leaving the middle-bottom grooves for the top, which was right where Pierce was running most of his laps. For 25 circuits, Pierce was in hot pursuit of the leader, and was even given a few restarts to get a run on him, but could not make the move in the end.

“I knew what I was doing was working,” Satterlee said. “I could see that [Pierce] was close, but I didn’t think I was giving up enough for him to really get a slider and clear me.”

On the final restart came Pierce’s most fierce challenge, as he drove it deep into Turn 1 with two-to-go as if to try a slide job, but Satterlee had too much speed in the lane above and drove right on by to retain the top spot.

“At that point, I just tried to make a bigger arc in the corner, and just take up a little bit more room on entry,” Satterlee said. “I tried to make a little more speed down the straightaways to not enable him to get a run on me.”

The 50th World 100 comes to a close Saturday night at Eldora Speedway with Heat Races, Last Chances, B-Scrambles and the 100-lap, $53,000-to-win finale for the most coveted trophy in all of dirt track racing.