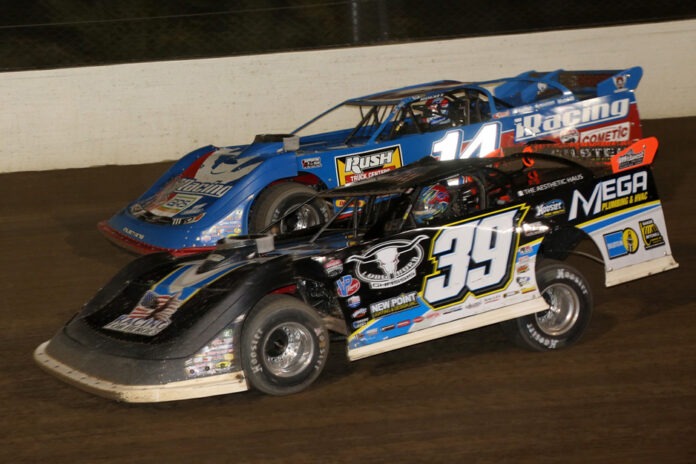 ROSSBURG, OH – Eldora Speedway® and official livestream partner, FloSports, a leader in sports streaming and original content, today announced the return of The Eldora Million®, one of the most legendary events in the history of the hallowed high-banked half-mile clay oval.

For just the second time ever – on Thurs., June 9, 2022 – the blue-collar superstars of Dirt Late Model racing will compete for a winner’s purse of $1 million dollars.

The Eldora Million® will feature a full-program of heat races, last chance showdowns, and culminate with the $1,002,022-to-win Championship Feature. The initial seeding for Thursday’s heat races will be set on Wed., June 8, via a program of tournament-style preliminary features.

The combination of two giant shows – The Eldora Million® and the 28th running of the $128,000-to-win Dirt Late Model Dream® on Sat., June 11 – in a span of four days, creates one of the richest open competition events in motorsports history with posted prize money already exceeding $1.9 million.

“I have said from the first-day I took ownership of Eldora that we want to make Earl and Berneice proud and continue to push the limits of race promotion. I can’t think of a better way to honor their legacy than bringing back The Eldora Million® one more time for both our longtime drivers and fans as well as a whole new generation who have only heard about it,” said track owner Tony Stewart. “And I couldn’t do it without our phenomenal partnership with Mark Floreani and his team at FloSports. I love working with them in growing our sport, showcasing our events, and creating engaging content for our fans on FloRacing, and the entire FloSports subscriber base.”

“Tony Stewart and his team keep raising the bar with their incredible events at the legendary Eldora Speedway,” said Mark Floreani, CEO and Co-Founder, FloSports. “Their commitment to motorsports has been integral to the growth of FloRacing and we are proud to support their mission to bring this sport to an even wider audience around the world.”

It was February 2000 when the inimitable promoter and founder of Eldora Speedway, the late Earl Baltes, stood up at the annual Racing Promotion Monthly Workshops in Daytona Beach, Fla., and shocked the industry with the announcement he would pay an unprecedented $1 million to the winner of a Dirt Late Model race that coming October. However, a combination of heavy rains, wet grounds, and unseasonably cold temperatures forced the event to be rescheduled to Saturday, June 9, 2001 – in place of the 8th annual Dirt Late Model Dream®.

Fan-favorite Donnie Moran, a four-time winner of the World 100® and native of Dresden, Ohio, triumphed by passing Martinsville, Ind.’s Don O’Neal, an eventual Dirt Late Model Dream® champion, with a slide job for the lead on lap-25 to lead the remaining 74 laps, forever earning the moniker “The Million Dollar Man – Donnie Moran!” Now, just over 20 years later, both Moran’s son, Devin, and O’Neal’s son, Hudson, are two of the young lions who make up the next generation of stars in the Dirt Late Model ranks.

“With today’s confirmation there will indeed be a sequel to The Eldora Million®, our great team here at Eldora now has the 2022 Major Events ticketing and camping calendar finalized. We appreciate the patience of our loyal fans, and renewal notifications will begin showing up in their patron accounts and email by early next week for their 2022 ticket and campsite renewals,” said general manager Roger Slack. “Like everything these days, it took a little longer than anticipated to deliver all of the details for a week of events of this magnitude. Our team wanted to get everything right and assure an expedited renewal process for the many patrons who hold tickets to each of our major events.”

Patrons who had tickets for the 2021 Dirt Late Model Dream – the 27th edition, which was held Wednesday, June 9 and Thursday, June 10, 2021 – will have first opportunity to purchase those same seats for The Eldora Million® as part of the event renewal process.

Public sale for tickets and campsites for all 2022 Major Events will begin on Saturday, December 18 at 10 a.m. Eastern exclusively at www.EldoraSpeedway.com, where fans can also sign-up for breaking news updates delivered via email or text message. The latest event information, including race day schedule and weather updates, can be found on the official @EldoraSpeedway accounts on social channels Twitter, Facebook, Instagram, Snapchat, and YouTube.

To access FloRacing’s live and on-demand coverage of the The Eldora Million®, the Dirt Late Model Dream®, the World 100®, the 4-Crown Nationals®, and more from Eldora Speedway, plus the Chili Bowl Midget Nationals, every USAC national series event, and the entire FloRacing All Star Circuit of Champions® schedule, visit FloRacing.com to become an annual PRO subscriber. The annual subscription unlocks access to premium content and live events across the entire FloSports network. Watch the events across all screens by downloading the FloSports app on Amazon Fire TV, Roku, Apple TV, the App Store, and Google Play Store.

About Eldora Speedway: In 1954, renowned bandleader and proprietor of the Eldora Ballroom, Earl Baltes, carved a flat quarter-mile clay oval out of the cornfield that laid in the natural amphitheater between Ohio S.R. 118 and the Wabash River. Over the next 50 years, the enterprising Baltes, and wife Berneice, grew Eldora Speedway from its humble roots to national prominence by promoting events no other promoter dared fathom on the half-mile high-banked clay oval.

As dirt racing’s popularity surged in the late 1990s, along came new multi-million-dollar facilities, and corporate entities began to pepper Baltes about purchasing Eldora. However, in Baltes’ mind, there was only one choice – and in true Earl Baltes fashion – in the spring of 2004, he contacted a brash young racer who had tamed Eldora’s high-banks as a driver on his way to national championships in USAC and IndyCar, the 2002 NASCAR Cup Series champion, Tony Stewart. As Stewart’s on-track career skyrocketed, he passionately reinvested into entrepreneurial endeavors involving his beloved dirt racing, beginning with race teams in 2001. Somehow, the two high-profile figures who always drew a crowd of well-wishers at Eldora, managed to keep their talks quiet and the celebrated-promotor and superstar driver announced the transition of ownership in November 2004.

Now entering its 18th year under the ownership of Tony Stewart, Eldora Speedway will play host to its 69th season of racing in 2022. The full event calendar, including ticket and campsite information, will be posted when available at www.EldoraSpeedway.com. Race fans can join a community of over 1,000,000 people from around the world who enjoy behind-the-scenes access by following @EldoraSpeedway on social channels Twitter, Facebook, Instagram and Snapchat. Exclusive video content posted on www.youtube.com/EldoraSpeedway has over 8.2-million views.

Every event at Eldora Speedway is available live. Race fans can tune into the World 100®, the Dirt Late Model Dream®, the 4-Crown Nationals®, The Eldora Million®, and more on FloRacing.com or on their favorite screen via the FloSports app. FloRacing is Eldora Speedway’s official livestream partner.