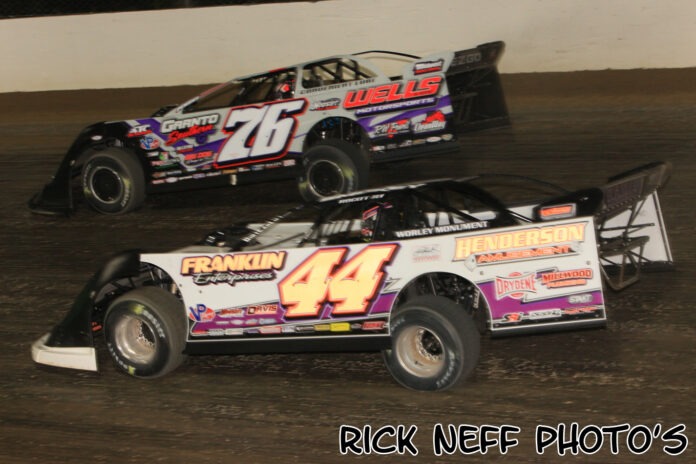 As Lap 90 clicked off the scoreboard in “The Dream,” he was running out of time to catch Chris Madden. However, his fortune changed when a caution brought the field together on Lap 91.

The Evans, GA driver, seized his opportunity on the restart, charging past Madden and holding on to earn his third consecutive Dirt Late Model Dream—this one worth $128,000.

Overton stated that without the yellow, Madden would’ve won the race. However, he used a lesson from his past at Eldora to gain the upper hand on the restart.

“I shouldn’t have won that race,” Overton said. “I probably had a second-place car, but I got a couple of guardian angels riding on this thing with me.

“All I was thinking is, I forgot which one it was when I was leading, and I chose the bottom, and he blew around my ass on the top. So, when he chose the bottom, I was kind of grinning, and I didn’t want to jinx it, and I drove it down in there and knew I had him clear, so I just let ‘er rip.”

“Big Sexy” is now the second driver to win “The Dream” more than twice, joining eight-time winner Scott Bloomquist on that list.

He remained just as satisfied with his third “Dream” win as he was with his first once he learned of the statistic in Victory Lane.

“Like I said the first time I won, if I don’t ever win another one, I did more than I’d thought I’d do,” Overton said. “It’s a good start to the week; let’s keep it rolling.”

The race resumed on Lap 15 Wednesday after being postponed due to rain, with 14 laps completed in June. Madden led all 14 laps at the beginning of the event and had to wait 88 days to see the green flag again at “The House that Earl Built.”

The Gray Court, SC driver, who also finished second in the Eldora Million, said he knew his lead was in jeopardy when the caution for Bobby Pierce and Devin Moran came out with nine laps left.

“We were fine as long as we didn’t have a caution,” Madden said. “I knew if we had a caution, we were in trouble. We were down a cylinder. We had a plug wire fall off with probably 25 (laps) to go, and we were just on seven cylinders putt-putting around.

“I knew if we had a restart, we were a dead duck. It didn’t matter which line I chose; I just couldn’t take off. I hate it. The best car didn’t win tonight.”

Tim McCreadie, from Watertown, NY, finished third, his sixth top five in “The Dream.” He said his experience at Eldora paid off, despite struggling with his tires during the Feature.

“Since we went to the tire rule for this track, it’s slowed me down a little,” McCreadie said. “We squeezed a top five out of it based off of experience and knowing where to be on the track. I had a real bad chatter issue with the right front I never had with the 20s.

“We need to go back to work. What worked here for three, four, 10, 15 races where we were a threat just isn’t the same. Hats off to Brandon and Chris and everybody in the top five.”

The Blairsville, GA driver charged into the top five and stated if he got around Brandon Sheppard sooner, it might have changed the race’s outcome.

“I really needed to get by Sheppard,” Davenport said. “I needed to restart fourth; I needed to be on that second row. But I was a tick-tight, and when I got to fourth, I just ran too hard.

“I thought I could just rail the top and get by [McCreadie], and then when he slid me back, he was just dirtying the air up just enough to where I couldn’t make the turn down in the corner like I needed to.”

Sheppard, the 2019 Dirt Late Model Dream winner, rounded out the top five. The New Berlin, IL driver charged from 14th but said his tires were too hot when he tried to pass McCreadie.

“My car was really good and really maneuverable all the way through halfway,” Sheppard said. “I truthfully think I stayed up top just about 10 laps too long, and I got my tires overheated and sealed up a little bit.

“Once I got to McCreadie, I got my tires hot, and I was trying to move around, and I couldn’t at that point.”

Before the conclusion of “The Dream,” drivers who hadn’t won a race at Eldora had their chance to reach the iconic Victory Lane stage for the first time.

Ryan Gustin, Mike Marlar, and Daulton Wilson each scored $5,000 “Chasing the Dream” victories, giving them momentum for the 52nd World 100.

UP NEXT: The DIRTcar Late Models return to Eldora Speedway on Thursday, Sept. 8, for night one of the 52nd World 100.