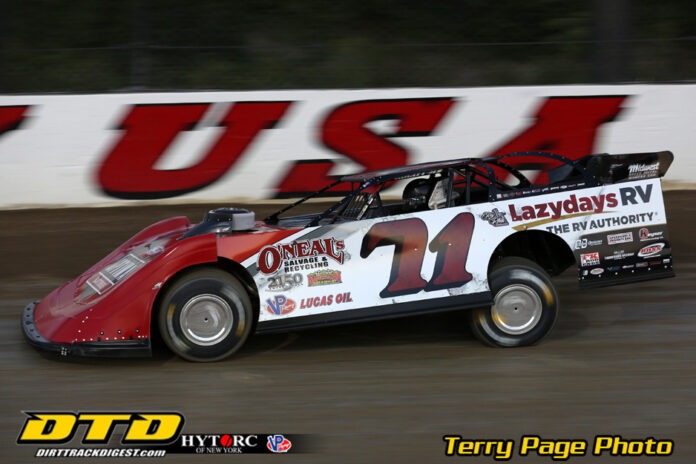 The Blairsville, GA driver stormed past Jimmy Owens on Lap 6 of Thursday’s Group A Feature to claim the $12,000 prize on night one of the 52nd World 100.

The four-time World 100 winner said his team made changes throughout the day, helping his car return to its winning form.

“I think we’re one adjustment away from being perfect,” Davenport said. “We changed quite a few things today. We just couldn’t get a good balance on it. 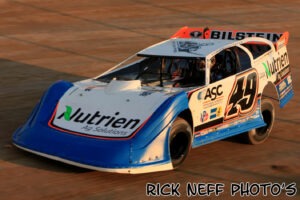 “I wish the racetrack was like that last night. We might have been right back up here. It’s a phenomenal job, by my guys, Jason, Vinny, and Tyler. We all put our heads together and constantly changed on this thing. We changed things on the car, and it messed the balance up a bit, and I think we got it back there pretty good.”

The Newport, TN driver stated he was happy with his car but needed to make a few more adjustments to stay with Davenport.

“I was just discussing with my guys about how we can get a little more stable in the corners,” Owens said. “I felt like we were good, but the 49 has been phenomenal all year. Another great year for those guys. Hats off to them.

“We got some work to do, and maybe we can make some improvements for the big race.”

Hudson O’Neal had one goal in his World 100 preliminary Feature—get in clean air quick.

The Martinsville, IN driver, accomplished that goal immediately, thundering around Shane Clanton in Turn 2 to take the lead.

O’Neal dominated the Group B Feature at Eldora to earn the $12,000 triumph.

“I got a really good start there, and I knew I just needed to get the lead there and get to clean air as fast as I could,” O’Neal said. “The first [Feature] went caution-free, so I figured the second one would, too.

“The air plays such a big factor here. I swear it felt like I slowed down two seconds when I caught lap traffic.”

Clanton, from Zebulon, GA, crossed the line second after winning a Heat Race earlier in the night.

The “Georgia Bulldog” stated he’s optimistic about the rest of the weekend.

“Our car was good, we had a good starting spot, and I hope we can do it again tomorrow,” Clanton said. “This Capital Race Car is pretty good right now. Hopefully, we can just keep it up.”

Chris Ferguson rounded out the podium one night after making an early exit in the Dirt Late Model Dream.

The Mount Holly, NC driver was forced to switch to a backup car and stated he was thrilled with how well the car ran.

“I just want to give a special thanks to my crew for all the hard work,” Ferguson said. “The car was really good. I could just kind of hang with Shane and Hudson but couldn’t get momentum going like we needed to.

Tickled to death; this is the first time I’ve raced this car here since 2018.”

UP NEXT: The DIRTcar Late Models return to Eldora Speedway on Friday, Sept. 9, for night two of the 52nd World 100, as drivers will battle in twin 25-lap split-field Features paying $12,000-to-win.