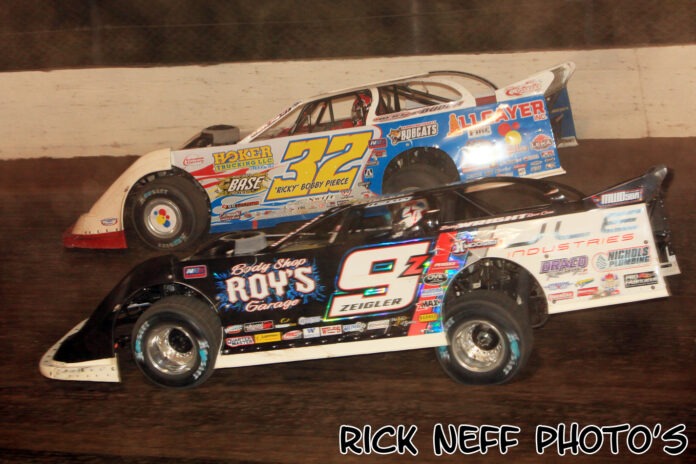 After two nights of racing, Chris Madden, the overall points leader, spun a six on Eldora’s Wheel of Misfortune. Six cars will be inverted in each of Saturday’s Heat Races.

Bobby Pierce and Ricky Weiss waged war for the lead in front of a packed Eldora Speedway crowd in the final ten laps of Friday’s first preliminary Feature.

Pierce chased Weiss on the outside, before thundering around the Headingly, MB driver to take the lead in Turn 2 with seven laps to go.

However, Pierce’s momentum was slowed immediately in traffic, allowing Weiss a chance to regain the top spot.

Weiss pulled even with Pierce coming out of Turn 4, pinching Pierce closer to the wall and making contact as the two crossed the start-finish line.

Weiss pulled away to take the checkered flag by more than two seconds. However, he was disqualified in post-race technical inspection, giving Pierce the win.

The $12,000 triumph is the Oakwood, IL driver’s 14th victory of the season—one he stated he’ll take knowing how hard it is to reach Eldora’s Victory Lane.

“You always hate to see that for other competitors, knowing how hard everyone works,” Pierce said. “I know it’s a kick to them, but we’ll take it. Anytime we can get on this stage here, no matter what happened, we’ll take it.

“We felt like it was almost our race to win there anyway. Normally this stuff doesn’t happen to me. I don’t get that good luck. I’m really appreciative to get it.”

Kyle Bronson, who led the first 15 laps of the Feature, finished second.

The Brandon, FL driver said his handling was good at the start but struggled with it once he reached lap traffic.

“We took off pretty good there,” Bronson said. “We had a pretty good car. I got a little tight when I caught them lap cars, and I just got up there and got my spoiler knocked off, and then it got really free.

“I just have to do a better job when I catch those cars, and we have to do a few little tweaks to the car to get it better for me.”

Many years of experience in traffic paid off for Dale McDowell in Friday’s second preliminary Feature.

The veteran driver chased Josh Rice in the final five laps of the race, inching closer to traffic directly ahead of them.

The “Mac Daddy” finally saw his opportunity to strike with two laps to go when Rice had to move away from the cushion. McDowell dove under Rice’s Rocket Chassis, sprinting away from the Verona, KY driver and earning the $12,000 triumph.

“You don’t know how many times you get to be up here or come here and be competitive,” McDowell said. “I really cherish it and thank all you guys. It’s been a lot of fun, and I got a lot of good people behind us. But it’s a lot of fun pulling back up on this stage.”

Rice crossed the line second, narrowly missing out on a win after leading 23 laps. He said he’d never thought he’d be disappointed with a second-place finish at Eldora.

“If you’d have told me I would’ve run second and be disappointed, I would’ve said you were crazy,” Rice said. “First off, congrats to Dale. He was so much better than me in the air when I caught them lap cars. I was already pretty much married to the cushion.

“We had a great car tonight,” Madden said. “It’s just inches out there. We started [seventh] and made it to third. I’m very pleased with the balance of our car and pleased with the racetrack. Hopefully, we can get a good starting spot in the Heat Race tomorrow and start up toward the front in “The World.”