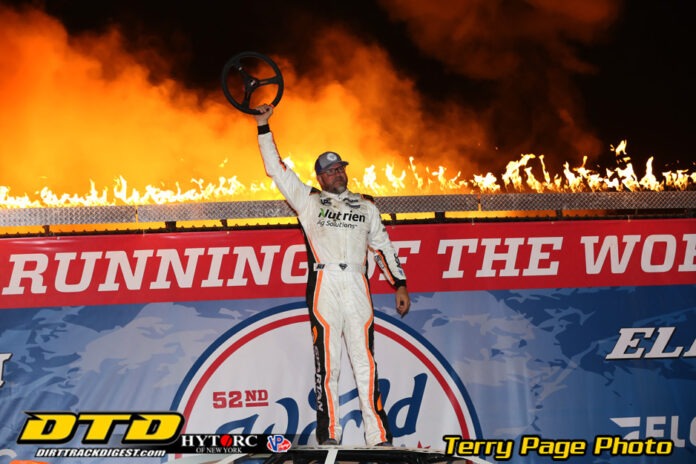 After the Blairsville, GA driver lost the lead to “Big Sexy” near the halfway point, Davenport returned the favor on a Lap 55 restart, sliding past Overton in Turn 2 to re-take the top spot.

From there, “Superman” flew away from Overton, beating him to the start-finish line by more than five seconds to earn his fifth World 100 triumph, worth $55,000.

“We weren’t great to start off with,” Davenport said. “I didn’t think we would be. As the tires kind of quit, our car got better and better. I knew when [Overton] got by me, it definitely worried me there. But I knew I had to get up on the wheel on the restart.

“I didn’t really go ahead and slide all the way across. I was just trying to block a little air, and that way, I could get to Turn 3 first.”

The victory is Davenport’s second crown jewel triumph at Eldora this year, having won the Eldora Million in June, his eighth win overall at Eldora and is his fifth World 100 victory in his last seven starts at the event.

“I don’t know what it is about this place; I just love it,” Davenport said. “I just have a feel that I want here, and ever since I figured out what I need with my race car, it’s helped me learn even more.

“The long laps around the top, around the bottom, and around the middle, me and Overton run the same line around this place. It was definitely going to be hard to pass him if it wasn’t on a restart.”

Overton, the race’s defending champion, crossed the line second. Ironically, what helped him gain a win in the Dirt Late Model Dream three days earlier – when Chris Madden had a spark plug wire fall off – kept him out of Victory Lane on Saturday.

“Y’all ain’t gonna believe this,” Overton said. “My damn spark plug wire fell off when I was right there behind [Davenport]. I just didn’t have nothing for him. It is what it is. Congrats to JD and them guys. We’ll take our second.”

Madden finished third, as his quest for a crown jewel victory at Eldora continues. The Gray Court, SC driver stated he didn’t have the car to win and that his Rocket chassis was tight toward the end.

“We did a great job this week. My guys did a great job. We’re happy with our finish. We didn’t win, but we have a good car, and we just need a few things here and there.”

“T-Mac,” said he struggled to pass unless it was on a restart.

“But for us, I’m happy with the car. You just can’t spot everybody all of them spots. When you get to [Madden], and you get to those guys up front that know how to just arc in a little different because they know what’s going on about these cars and how they’re unhooked, they cover just enough to slow you down.”

A lane change helped him charge forward after falling back early in the race.

“I fell back a little bit, and then I think it was the first or second yellow I moved off the bottom, and I picked up a lot of speed,” Thornton said. “We’ve kind of struggled here with the 100 lappers. We’ve been good on the [preliminary] night. So, it’s nice to be able to have good speed and really see third place in front of me.”

Jonathan Davenport continues to cement his legacy as one of the most significant competitors in World 100 history. Another win in 2023 would tie him with Billy Moyer for the most World 100’s all-time, as he continues to add to his impressive resume.