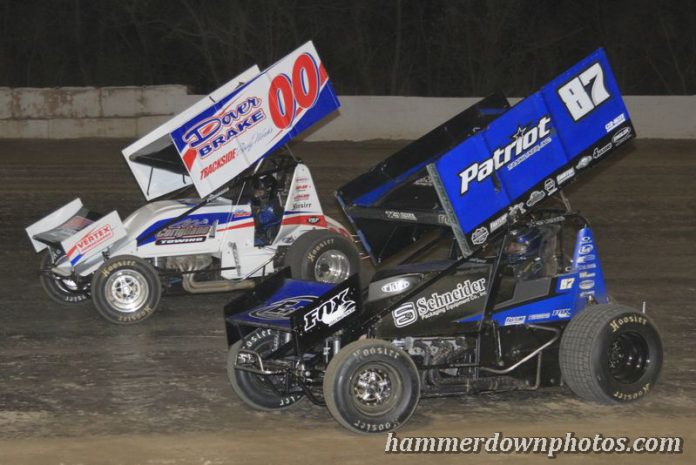 The last week of June, first week of July is one of my favorite times of the year. School is officially out and I’m free to go racing wherever, whenever I can and want.  Now that’s a good perk, but that isn’t the only reason I love this upcoming week. My favorite part of this time of year is that we reach, at least to me, the best part of the Lucas Oil Empire Sprint schedule with Donath Motor Worx Central New York Speedweek. It’s a five day grind that finds teams towing up and down Interstates 81 and 90. Huge fields of cars are usually joined by large crowds and awesome racing. The atmosphere is second to none. If you haven’t been to Speedweek event before, I highly recommend that you add it to your “bucket list” of things to do at some point. It’s a good time.

As I do every year, I put together a list of events as well as predictions as to who will win. If any of the drivers I’ve picked read this, I apologize now as I’m not purposely trying to put the jinx or the hex or anything else on you.  No one wants pre-race love, they’d rather have the headlines afterwards. Heck, I’ve had guys thank me for not picking them.

In all honesty, picking an ESS winner at any of these races is difficult. Although I don’t name everyone in these predictions, the ESS field at these at these tracks are always loaded with a ton of talent and there are more drivers that can win than I can count on both hands. There will undoubtedly be shocks and surprises.  To me, that’s what makes this week so much fun. The unpredictability of it all.

And now that I said that, lets try to make the unpredictable predictable as we take a look at  past winners while making some picks for the 2017 Donath Motor Worx Central New York Speedweek.

Prediction:
Caprara’s Can-Am Motorsports Park kicks off Speedweek for the first time in 2017 on Wednesday after being the Friday night date the last couple of years. Coming into this year’s event, Dan Kaszubinski and Steve Poirier are each tied with five wins on the all-time list in Empire Super Sprint action. My prediction is after Wednesday night, they won’t be tied anymore. Steve Poirier, although running a limited schedule in 2017, is a master on fast, momentum tracks. He’s won the last two events at the “Nasty Track of the North” and I expect him to kick off his title defense with a win at Can-Am.

Prediction:
Chuck Hebing was the pick last season (the only one I got right) and since that seems like the logical choice, I should pick him here.  Instead I’m not going to take the safe bet, I’m going to go out on a limb and pick someone that has never won at Canandaigua in Dylan Swiernik.  Swiernik is always right there at CMP.  He’s been so close to knocking one off.  He’s going to get it done during Speedweek.

Prediction:
I’m going to predict that a current Modified driver wins on Friday night at the Brewerton Speedway. Four out of the last seven Empire Super Sprint events at the track have been won by drivers that find themselves behind the wheel in both divisions on a regular basis. Mike Mahaney was a surprise winner last year as he grabbed his first ever Brewerton win in any division. This year, on Friday night when the series returns to the Demon, Danny Varin will find himself in Victory Lane. He’s been fast in every visit to Brewerton and won the September event last season.

Prediction:
The time is now for Larry Wight. Wight has dominated the action at the Fulton Speedway in big-block Modifieds. On Saturday night he will win his first Empire Super Sprint Speedweek event. He had terrible luck in the season opener when he flipped at the start of the A-Main. Fulton owes him one. Saturday will be the day that he finally puts it in Victory Lane at his home track with ESS.  Wight is also a possible choice to win the overall title as he’ll have the opportunity to compete in all five A-Main events if he chooses.

Prediction:
Utica-Rome is always tough to predict, then again, all of them are.  It seems to be whatever driver has the hot setup at the time is able to clip off a few in a row. That is currently the situation as Lucas Wolfe had a win last October then again in April during the Gladiator Twin 20 program. Danny Varin also earned an April win before winning the Memorial Day feature. Before that it was Jason Barney scoring back-to-back wins including the 2016 event during Speedweek. So with that, I’m going to pick someone outside of these three just to shake it up. I’m going with Coleman Gulick to score his first Utica-Rome win. Gulick came from mid-pack on Memorial Day weekend to finish third. He had the fastest car at the end of the race. Gulick is due another ESS win and Utica-Rome is going to be where he’ll get it.

Prediction:
Picking the Speedweek champion might be the hardest pick of all. There are so many talented drivers that are competing and there are no less than 10 guys that could easily be picked here. Steve Poirier and Chuck Hebing are the easy choices. Hebing has yet to earn the elusive Speedweek title, he’s won and accomplished everything else, but he’s come up a combined 30 points short the last two years. He’d be my betting favorite but I can’t count out a guy like Jason Barney. He might not win every race but when you look at the final rundown, usually Barney is there on the podium or in the top five. Then there is the defending champion Poirier. Poirier has run a limited schedule and it is yet to be determined what his schedule is for the week.

So with all the factors added in I couldn’t make a choice.  So I did an unofficial pole of some DTD staffers and they came to consensus.  They all picked Barney. The word that came up for him in each person I asked was “consistency.” He’s been consistent all year by scoring an average finish of 4.5.  That is the best average of any tour regular so far in 2017.  It’s expected that it will be more of the same for his team during Speedweek.  That should lead him to his second career Speedweek title.

For complete information about each event for the week CLICK HERE.