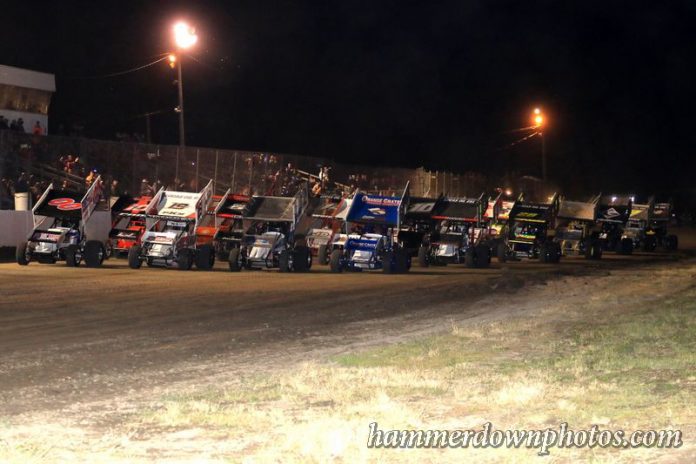 Another version of Donath Motor Worx Central New York Speedweek is in the books for the Lucas Oil Empire Super Sprints. It’s been a few days since it all wrapped up last Sunday at the Utica-Rome Speedway.  It took some time to compile all the stats and to add up the totals.  I honestly wanted to get this done earlier in the week, but it took a few days to catch up on some sleep and to get the final totals all added up.

This year a new champion was crowned with Danny Varin surviving the final night to add his name to the history books alongside former champs Michael Parent, Jason Barney and Steve Poirier. The biggest newsmaker of the week had to be the weather, but unlike last year, all five events were run. Now, let’s take a look back at Speedweek 2017 by the numbers.

Weather Forecast
If you would have said on Tuesday that all five nights of the 2017 edition of Speedweek were going to be run, I would have thought you were crazy based on the predictions of the weatherman. Although the local weather proved to be a bit more accurate than the national forecast, rain was a factor.

Wednesday night the Can-Am Motorsports Park kicked off the week-long event with a beautiful forecast. Sunshine and zero percent changes of rain.


Thursday at Canandaigua Motorsports Park the forecast wasn’t very good with a 50% chance of precipitation. Luckily the rain stayed north and racing went off as planned.

Brewerton Speedway had a 90% chance on Friday and it rained, then rained again. The track crew at Brewerton worked their tails off. Racing started at close to 9pm with the ESS portion wrapping up during the Midnight hour.

Fulton Speedway had a 60% chance of rain which they got in the morning with skies clearing in the afternoon.

Utica-Rome Speedway faced at 20% chance. A couple of rain drops fell during the afternoon and evening with a majority of the precipitation missing to the south.

Needless to say it was a week of close calls and near rain-outs. The tracks and crews should be commended for pushing through even the weather forecast wasn’t the most ideal for getting cars and drivers to the track.

Total Drivers
54 different drivers competed during Speedweek, which matched the 2016 edition on the nose. 17 different drivers attended every event on the schedule. A number that would have been higher had mechanical woes and a hard crashes not taken a couple drivers out of contention over the five day grind.

Car Counts
The week started out strong with 34 cars entering the first night’s action at the Can-Am Motorports Park. 27 cars made the trek to Canandaigua Motorsports Park with 30 cars entering into action on Friday night at Brewerton. The low for the week was Saturday night with Fulton Speedway garnering 26 before the high point of the week on Sunday night at Utica-Rome Speedway with 36. The average came out to 30.6 for the week.

Point Standings
As mentioned in the introduction, Varin captured his first ever Speedweek championship. The Fonda, N.Y., pilot wasn’t even sure if his team was going to run every event during the week. They got off to a strong start the first couple of nights and decided to stick it out for the title. Coming into the final night, it was a three car race between Varin, Mike Mahaney and Mark Smith.  Only nine points separating the trio. Mahaney had engine woes while Smith broke the wing tree on the car in the feature. Varin’s second place effort was more than enough to earn the championship.

Varin ended up picking up 514 points. Varin had a second place finish at Utica-Rome, two third place efforts (Can-Am, Fulton) and a fifth at Canandaigua. His worst finish of the week was 10th on a tough Brewerton surface Friday. This gave him an average finish of 4.6. It was good enough for the Speedweek title. He was the only driver, of all those that competed in all five nights, to finish in the top ten in every event.

Matt Tanner finished second with 450 points. Tanner’s best finish of the week came on Sunday night at Utica-Rome Speedway where he finished third. Mike Mahaney ended up third with 437. His best effort of the week was a second place run at Canandaigua Motorsports Park. Mark Smith was fourth with 431 on the backs of three top five finishes to start the week. Things went downhill from there for Smith. Matt Billings completed the top five with 419.

Chuck Hebing had three strong runs to end Speedweek with two wins and a second. He finished tied with Jason Barney for the sixth position as they both had their fair share of struggles during the week. Paul Kinney, Jonathan Preston and Paulie Colagiovanni completed the top ten in points.

Although he didn’t win the championship, Hebing took home the most money during the week. Hebing racked up $8,913 in earnings over the five day stretch and that was after starting the week with $150 in tow money on the first night after breaking the motor in his No. 45 during heat in the engines.

The total payout for the five nights, including point fund monies and Hoosier Tires came out to $80,505.

The Winners and Leaders
Lucas Wolfe, Larry Wight, Jason Barney and Chuck Hebing each reached Victory Lane during the 2017 version of Speedweek. For Wolfe and Wight, it was their first ever wins during the week-long stretch.

Wolfe started on the pole of Wednesday night’s 25-lap feature at Can-Am. He led from start to finish in the non-stop main.  Smith tried chasing him down late in the go but came up short in his quest.

On Thursday night, Larry Wight and Mahaney put on a show for the Canandaigua crowd. Mahaney led the first 14 laps with Wight taking the lead from laps 15 to 20. Mahaney wrestled the lead back on lap 21 and 22 before Wight took the lead for good on lap 23. It was an instant classic.

Mother Nature wreaked havoc at the Brewerton Speedway Friday night giving drivers a tricky track surface. Over an inch of rain fell during the day with crews working several hours past the scheduled start time to get the track into race shape. The feature was a hammer down affair with Hebing leading all 25 laps.

Jason Barney got his Speedweek ship righted on Saturday night by winning at Fulton. Paul Kinney led the opening eight laps before surrendering the lead to Mahaney. Mahaney led laps nine and 10 before Barney drove by him on the bottom. Barney survived a couple of late race restarts to get his only win of week.

For the second night in a row, Kinney drew the front row for the feature at Utica-Rome. He got the jump to lead the first five laps before giving up the spot to a high flying Varin. Varin led until just before halfway when Hebing pulled a slider to take the lead. Hebing led from lap 13 to the end for his second win of Speedweek.

A total of 125 laps of features were run during the week. Hebing led the most laps with 38, Wolfe led 25 while Mahaney led 18 laps. Barney paced the field for 15 laps, Kinney for 13, Wight scored nine laps at the front and Varin was at the helm for seven.

Flip Count
Six cars took to the air during the five night trek through Central New York. The first car to get upside during the week came on Friday night at the Brewerton Speedway. Josh Flint’s tough year continued as he got into another car causing him to take a wild ride in the first turn. He walked away from the crash only to be checked out later on at the hospital. Fortunately he was free of serious injury.

Yan Bilodeau also got over softly on Friday night at Brewerton while Brett Wright took a hard ride. He caught the concrete wall in turn one and ended up landing on top of it. He quickly jumped out of the car only and walked back to the pits. The crash ended his Speedweek.

Coleman Gulick flipped at the start of the A-Main on Saturday at Fulton Speedway. He hopped the cushion in turns three and four causing him to go over. Later on, Dalton Herrick got into Smith as he twirled through the air. He ended up landing on all four wheels.

The final flip of the weekend came at Utica-Rome Speedway as United Racing Club regular Mike Haggenbottom flipped in the fourth turn. His Speedweek ended with the crash.

From State to State:
Several states were represented as well as Canadian provinces. Obviously a bulk of the competition was from New York with 41 drivers competing from the Empire State. Four drivers entered into action from the province of Ontario, four drivers competed from Pennsylvania, two from Quebec, two from New Hampshire and one driver made the tow from Connecticut.

And so ends another edition of Donath Motor Worx Central New York Speedweek for the Lucas Oil Empire Super Sprints. As it’s been in the past, it was grueling week that tested the drivers, crews, officials and fans. At the end, it was a great time and I’m already looking forward to the 2018 edition.